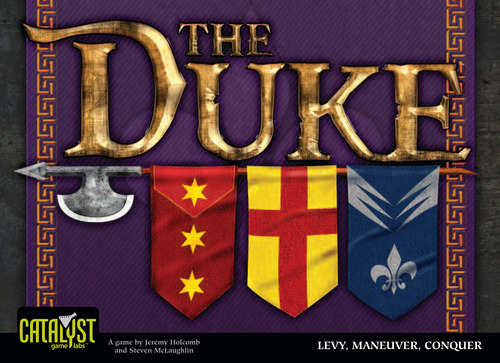 When I was younger, I took up the hobby of chess. I played in two tournaments and finished 2nd place in my age group in both of them. (It's probably worth noting that there were only two to three people in my age group at these tournaments.) I liked the game, but I never liked it enough to get better. I knew all the names of the pieces and how they moved. I even knew what I considered were advanced moves, like how to castle and en passant. However, like I said earlier, I never liked the game enough to get better. Getting better took years of learning strategy, opening moves, defenses, etc. It seemed like a lot of work for a game, and it was not something I had the discipline to do. Therefore, I stopped playing and the boards and pieces sit on a shelf gathering dust. When I got into the tabletop gaming hobby, I learned of a game called The Duke. It was supposed to take the game of chess and make it completely obsolete. Let me tell you about this game.

The Duke is an abstract strategy game with imperfect information. It is designed for two players, ages 12 and up. It takes approximately 30 minutes to play and retails on Amazon for roughly $30. Today, I will be teaching you the basic game. 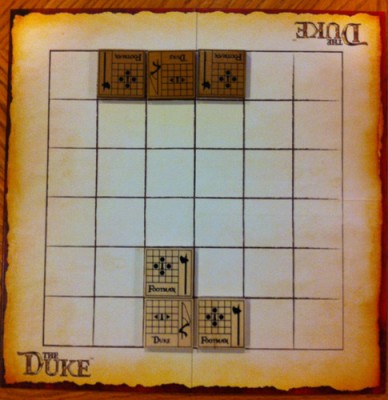 1. Place the gameboard on a flat surface.

3. Remove the Mountain, Dragon, two Flags, Duchess, and Oracle tiles from the game.

4. Take the Duke Tile and two Footman Tiles from each set of tiles and place them on the board for initial setup. The Duke Tile must be placed in one of the two center squares of the bottom row. The Footman tiles are then placed next to The Duke Tile so that one side is touching. (Note: All tiles must be placed with their name oriented towards the player and the icon in the center of the tile being the dark black pawn.)

5. Take each remaining set of tiles and place them in a separate bag, mixing them up thoroughly. 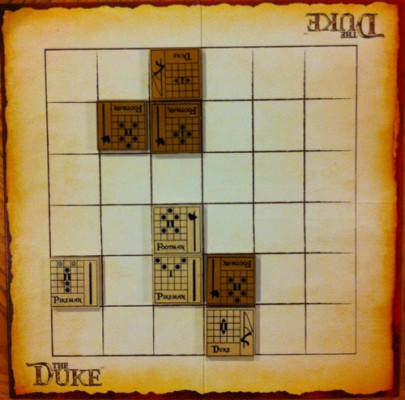 On your turn, you must do one (and only one) of the following moves:

1. Move a Troop Tile on the gameboard using any legal move as shown on the tile and then flipping the tile over to its reverse side once the move is complete. (Note: There are many different movement possibilities on the different tiles, which include moving, jumping, sliding, striking from afar, commanding your Troop Tiles, etc.)

2. Pull a new Troop Tile from your bag and place it on the gameboard in an unoccupied square that shares a side with your Duke Tile.

The game is won as soon as a player captures their opponent's Duke Tile. 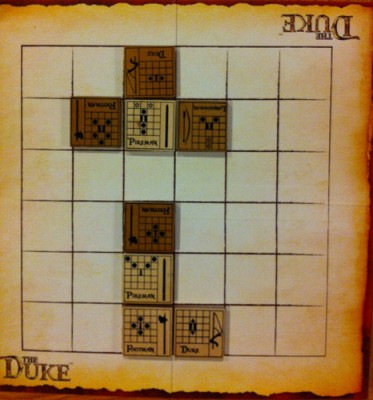 The game is simple to set up and simple to play. However, it is hard to master this game! The reasons for this are twofold - 1. Imperfect information and 2. Constantly changing moves. In chess, you can see all of your opponent's pieces and know exactly how those pieces will move. You can also deduce how your opponent will react if you move one of your pieces. In The Duke, you don't know which tile you or your opponent will draw when you reach in the bag. Maybe, it will help you. Maybe it will hinder you. You also may know how your pieces currently move, but when you move them and they flip over, everything changes. Yes, you can look at the reverse side of your piece before you move it, but you have to not only think about how your pieces can change, but how your opponent's pieces can change as well. These two elements make the game ever-changing and never the same from one game to the next.

I've been playing this game for five months now, and each game is always a surprise. People who love chess might not like this, because chess is controlled and if you are a seasoned player, you can plan moves very far in advance. You can't do that with The Duke, because it's a random grab of what tile you will play and what tile your opponent will play. As I mentioned earlier, there are also advanced tiles and terrain tiles you can play which add more strategy and depth to the game. There's also a dragon tile which has a mind of its own and can wreak havoc on both players.

Lastly, there are several expansion sets, which can be used to add tiles to the game or replace tiles in the game. There are City Troops, Command Troops, Mystical Troops, Shock Troops, and Siege Engines. I haven't had the chance to try these yet, but I have had a chance to try the first three of the following four expansions - Arthurian Legends, Musketeers, Robin Hood, and Robert E. Howard. These expansions replace tiles in the base game and let you add more theme to the game. In the Arthurian pack, King Arthur, Merlin, Lancelot, Guinevere, and Perceval are battling Morgana and Mordred. In the Musketeers pack, Porthos, Aramis, Athos, and D'Artgnan are battling Rochefort, Richlieu, and de Winter. And in the Robin Hood pack, Robin Hood, Little John, Maid Marion, and Friar Tuck are battling Prince John, the Sheriff of Nottingham, and Sir Guy. As a fan of classic literature, this made the game even more enjoyable and helped add some playfully-themed banter between me and my fellow opponent.

I don't normally like two-player games, because I am someone who likes to play games with my whole family (or set of friends) and not just one of them. However, getting a group of people together is not always feasible, and sometimes family members just don't want to play games. (Perish the thought!) While, this game doesn't hit the table as often as other games in my collection, it fills a void I had and scratches an itch that I sometimes get. After playing it for five months, I can't say that the game has made chess obsolete. In some ways, it is a simpler game, but in other ways, it is so much more complex. I see this game as a viable alternative to people who want an abstract strategy game they have a shot at winning without having to spend years studying to become a grandmaster. My wife didn't particularly like this game, but I can't wait for my son to get a little older so that I can teach him this game and it can hit the table more often.

This game was provided to me for free by Catalyst Game Labs in exchange for an honest review. Expansions were purchased by me.