Onitama is the second Dice Tower Essentials game released by Arcane Wonders. It is a two-player abstract strategy game with perfect information. The recommended age is 14+, but children younger than that can pick up this game. The total playing time per game is 10 to 15 minutes, but it can vary depending on how long you or your opponent agonize over what moves to make. It retails for approximately $30. In this game, you are a martial arts master with four students traveling to the Shrine of Onitama. You will battle a rival master and his pupils in an attempt to defeat them. However, this tournament is like others. Within the Shrine of Onitama, you and your pupils will be imbued with animal spirits and gain their movement/abilities. Let's get to the setup. 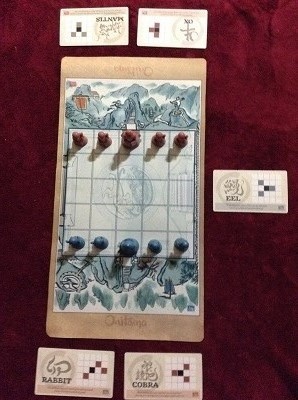 1. Roll out the Game Mat and position it so that one player is on the red side and the other on the blue side.

2. Take the five pawns (one Master and four Students) that correspond with your color and place them on the row closest to you with the Master positioned in the middle (on the Temple Arch Square) flanked by two Students on each side.

3. Shuffle the sixteen Move Cards and deal two face up to each player.

4. Deal one more Move Card and examine the color of the icon in the bottom right corner. That color is the first player. Place this card on the right side of the board in relation to who the first player is.

5. Return the additional Move Cards to the box and set up is complete. 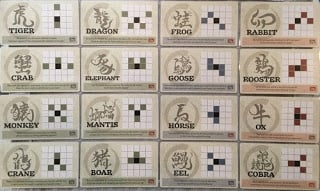 1. Pick one of your two Move Cards and move one of your pawns according to the movement shown on the card. (Note: The black square on the card represents where your pawn is on the board, and the colored squares represent places on the board where your pawn can move.) Your movements are not blocked by other pawns, cannot land you off the board, and if you land on a square occupied by your opponent, you capture that piece. 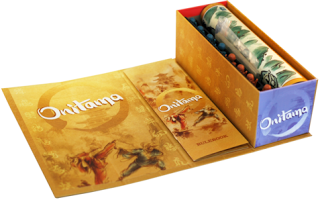 The first things I noticed about this game was the packaging presentation and components. Unlike a typical rectangular or square game box, this box unfolds and opens like a scroll. The game mat is not made of cardboard, but instead neoprene, like a mouse pad and the pawns show nice detail as well. The next thing I noticed was the theme of the game. Martial arts with different animal moves is a perfect fit and just makes sense.

After taking in all the aesthetics, I focused on the way the game plays. For obvious reasons, Onitama will draw heavy comparisons to Chess. Like Chess, this game requires both short term and long term thinking. You have to figure out your move and plan for how your opponent can counter that move. Unlike Chess, the pieces move based on a player's two Move Cards. You can see their cards, so nothing is hidden, but these cards are constantly rotating, so you have to be constantly vigilant that the card you use and then give to your opponent will not come back to haunt you. Other aspects of the game play that I liked were the quick set up, easy explanation of the rules, and the replay value. By choosing five of sixteen cards each game, there are thousands of different combinations you can experience, and each one will provide a slightly different game than the last. I recommend you stick with the same five cards your first couple of games while you get used to the game.

The game is billed as taking ten minutes to play, but a lifetime to master and I find it hard to disagree with that statement. You can get lost in thought on this game, but if you approach it with equal parts strategy and having fun, it won't overstay its welcome. I find this game to be a nice date night game or one you can play while waiting for the rest of your game group to show up. When I put this game up next to The Duke, another abstract strategy game I recently reviewed, my wife will pick this game every time, because it's easy to pick back up if you haven't played it recently, and it feels like you have a bit more control over your moves as opposed to luck of the draw. I give it 9 out of 10 stars.

This game was provided to me for free by Arcane Wonders in exchange for an honest review.