Erin McCole Cupp wrote her first novel ten years ago: Jane_E, Friendless Orphan: A Memoir. It is a sci-fi, steampunk version of the original Jane Eyre romance by Charlotte Brontë. In honor of Jane E's anniversary, Mrs. Cupp has decided to re-release her first novel in a three-book series. The first installment of this ebook series is Unclaimed: The Memoirs of Jane_E, Friendless Orphan-Book 1 and was released on July 6, 2016. The subsequent ebooks are scheduled for release in September and December. Their titles are Nameless and Runaway. Mrs. Cupp was kind enough to send me a PDF version of her ebook for review. 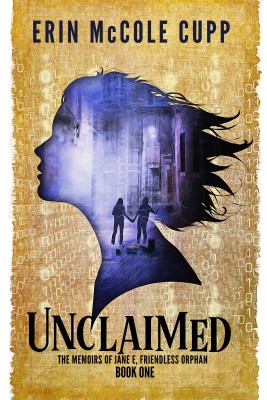 I personally have never read Ms. Brontë's romance novel, so I wasn't sure what to expect. Not being too familiar with cyber-punk, near-future sci-fi, I was blown away by the creativity Mrs. Cupp brought to Jane's story. Jane is an orphan by way of an unclaimed embryo who discovers herself through a series of life events. She has no one to rely on but herself and is viewed as a scientific mistake by her foster family.

Jane always felt like an outsider until she met Aidann. They first meet when Jane is sent away from her foster family, the VanDeers. Her new friend is also a Catholic. She ends up in an Asian boarding school with a steady day of school and work. Once again just a number, she must fight for the chance to be free from her next prison. She works hard and finds employment as a homeschool teacher. She has few people that she can really trust. Communication and words of wisdom are hers to share with her students who look up to her.

Mrs. Cupp's descriptions are gripping and reel the reader in. Every word draws one in deeper and carries the reader to the next part of the story. The futuristic devices and pro-life topics really hit a strand of reality. The integrity Jane fights to keep for herself is all she owns. We must fight today for our own integrity with the way the world tries to sway us.

[Tweet "We are all stuck in a sort of prison world, fighting to keep our humanity through God. @cath_simplicity"]

We are all stuck in a sort of prison world, fighting to keep our humanity through God. We have lost the days of simple communication with the internet, Facebook, and texting. We are in constant connection with one another, but we never really say anything of value. In a day where the institution of marriage is being challenged and embryos are formed through in vitro, life in general is not regarded with the sacredness that God intended. Mrs. Cupp touches on some of these issues through her writing and the complications that the government can encounter through straying from God's purpose.

Erin McCole Cupp brings up important issues of today and of the future through Unclaimed: The Memoirs of Jane_E, Friendless Orphan-Book 1. I can't wait until the next installment to see where Jane ends up. How do you keep your own integrity through the people you trust?

A DVD Review of “When Calls the Heart: Troubled Hearts”
Read
Movie Review: The Adventurer: The Curse of the Midas Box
Read
I'll Do Better Tomorrow, I Promise: A Book Review
Read