This week Indianapolis, Indiana is hosting the biggest gaming convention in the United States - Gen Con! Tens of thousands of people will flock to Lucas Oil Stadium to play and buy games. I, unfortunately, will not be going and will be instead a member of GenCant. But just because I can't go doesn't mean I can't play games with friends and tell you about some fun games for the whole family. Today, I am featuring two games from Fireside Games (makers of Castle Panic and located at Gen Con Booth #743). The games are entitled Bears! and Here, Kitty, Kitty! 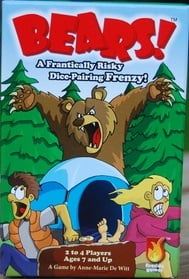 Bears! is a push-your-luck dice rolling game for 2-4 people ages 7+ and retails for about $20.

1. Place five Camp Dice (white dice) per person in the middle of the table, also known as the Campsite.

1. Now, you simply roll the Camp Dice and then have each player roll their Player Dice. Then, the mad scramble begins.

2. You try and make one of three possible combinations with your Player Dice and the pool of Camp Dice. - Gun and Bear, Runner and Bear, or Tent and Sleeping Bag. (Note: You can only claim one Camp Die at a time, but you can re-roll you Player Dice as many times as necessary until paired.)

3. The round ends and is scored when the last tent or bear dice is removed and someone yells, "Bears!"

3. Scoring is as follows: Gun and Bear = 1 point. Runner and Tent = 2 points. Sleeping Bag and Tent = Five points if there were only tents dice left at the Campsite or -2 points in there were only bears left at the Campsite. Unpaired Player Dice = 0 points. Improperly paired Player Dice and Camp Dice = -1 point. (As you can see, your best reward is Sleeping Bag and Tent, but it could come back and bite you if you're wrong, and by it I mean the bears.)

There a few games out there, which are similar to Bears!, but this one is better (in my opinion). For starters, all players are acting simultaneously. Other press-your-luck dice rolling games involve one player rolling and then another. That creates a lot of down time and gets more boring the more players you add. You don't have to worry about down time here, if you are going too slowly, you'll find others are safe in their tents, but your campers got eaten. I also like the fact that you can accumulate points safely, but occasionally gamble. In other games, your greed will completely hinder you and get you no points. With this one, there are ways to for sure score points, and there is only one way that will give you a big reward or a big loss. Lastly, the game is infinitely scale-able. (Okay maybe not infinitely, that'd be a lot of dice), but for every game you own, you can play four players. So if you want to play with eight players, just get two copies of the game. Easy! If the game ever gets too easy for you, pick up the expansion die Bears! Trail Mix'd and it will change the way each round is scored to give you an ever-changing game. 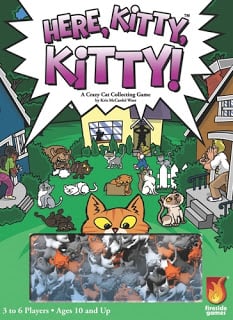 1. Give each player a Property card.

2. Place all 40 Cats in the center of the table. This represents the Neighborhood colony of cats.

3. Remove all Instant cards (red border) from the deck and shuffle the remaining cards. Deal three to each player, except in a 6-player game, where players are dealt two cards.

4. Shuffle the Instant cards back into the deck and place the deck in the center of the table next to the Neighborhood.

First player is given to the player who owns the most cats.

1. Perform two of the following actions (knowing that you can perform the same action twice:

a. Move one cat - Cats can be moved one space for one action

b. Play one card - Instant cards must be played instantly when drawn, but the player gets to draw a replacement card once the action is resolved. Standard cards require using an action to gain the card's effect. Defensive cards offer protection against the other two types of cards.

c. Discard one to three cards from your hand.

2. After you have performed your two actions, draw back up to three cards (two in a 6-player game).

3. The end game triggers when the last card is drawn. Everyone then gets one final turn.

We all know someone in our life who would be classified as a crazy cat person, be it neighbor, friend, or family. In Here, Kitty, Kitty!, you are that crazy cat person, and that's a pretty fun theme. What really makes this game is the miniature cats. There are 40 cats in four different colors and three different poses, and they really make the game pop. At first blush, this game looks like a silly little filler, but there's some area majority, set collection, and "Take that!" elements to it. So if you are looking for a fun, quick game where you can hoard cats without that awful smell, check out Here, Kitty, Kitty! It's good fun for adults and kids.

These games were provided to me for free by Fireside Games in exchange for honest reviews.