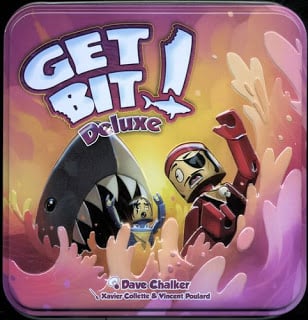 Get Bit! Deluxe Edition is a game for 3-6 players ages 7+. It takes approximately 20 minutes to play and retails for $26. In this game, you are competing against other swimmers, trying to stay alive, and not be eaten by the shark. Let's get to the setup.

[Tweet "Our #family #game review of Get Bit, a card game with swimmers and sharks! @stuartsstudy"]

2. Place the swimmers randomly in a line, with one behind the other. Initial order is not important.

3. Place the shark at the end of the line and at the feet of the last swimmer. 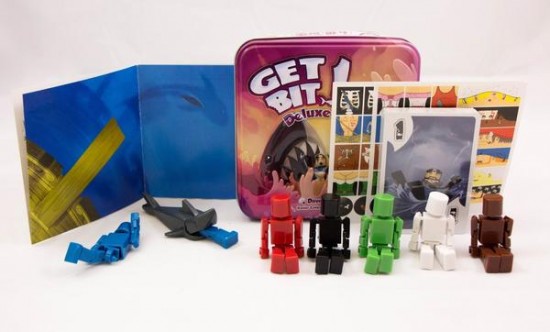 The game is played in rounds following these three steps:

1. Play cards - Each player picks a card from their hand and places it face down. When all players have done this, flip the cards face up and examine the results.

2. Move swimmers - If players reveal tied cards, their figures remain stationary. Non-tied players move their figures to the front of the line starting with the lowest number played. (Example: Red = 1, Brown = 1, Blue = 2, Green = 3. Red and Brown do not move. Blue moves to the front. Then, Green moves in front of Blue.)

3. Get Bit - Remove a limb from the swimmer at the end of the line. If that swimmer has no remaining limbs, remove it from the table. Otherwise, that swimmer goes to the front of the line and picks up his cards and returns them to his hand. (Note: This step is skipped in the first round.) If a player ever has fewer than two cards in his hand, he must also pick up his cards and return them to his hand.

5. Repeat these three steps until there are only two swimmers left. The swimmer at the front of the line is declared the winner.

The game is super-easy to setup and learn, which makes it perfect for children or people new to gaming. It also plays quickly, so if you get eliminated from the game, you don't feel too bad and can re-join a new game fairly quickly. The Get Bit! Deluxe Edition is nicer than the standard version because it comes in a metal tin as opposed to a paper tuck box. It also comes with stickers to decorate your figures and make them a bit more lifelike. The figures are my favorite part of the game--after the shark, of course! They are about the size of LEGO men, and you can just pop their head and limbs on and off with ease. Very cool!

What is also great about this game is that it can scale up or down, as necessary. If it is just you and your wife playing, instead of playing with one figure, you each get two. But what if you have a family larger than six (a common Catholic situation) or a child who doesn't like any of the included figure colors of Red, White, Brown, Green, Blue, or Black? Luckily, there are several inexpensive "expansions," which can increase the number of players. For $5 each, you can buy figures in Pink, Orange, and Green. What if you want to play as the Shark? There's a $4 expansion for that. There are also Dolphin and Squid dice that can add to the craziness if you so feel inclined!

Overall, I found this to be a quick and enjoyable game that didn't overstay its welcome. It is a game that belongs on every family's game shelf and one that your kids will be reaching for time and time again.

This game was provided to me for free by Mayday Games in exchange for an honest review.