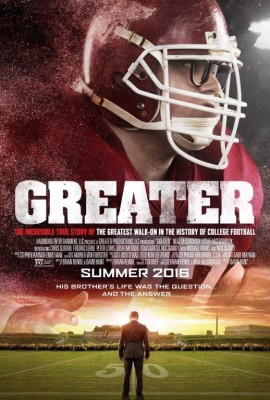 Opening in theaters nationwide on August 26, the awesome movie GREATER is far more than a football movie. While the backdrop is drenched in Arkansas Razorbacks lore, the message of this film is one you'll want to share with your entire family. Even this die hard Notre Dame Fighting Irish fan couldn't resist the story of Brian Bullsworth's amazing faith, determination, and spirit.

Brandon Burlsworth is perhaps the greatest walk-on in the history of college football. Brandon dreamed of playing for the Arkansas Razorbacks, but was told he wasn’t good enough to play Division I ball. Undeterred, Brandon took a risk and walked on in 1994. Written off by fellow teammates and coaches, Brandon displayed dogged determination in the face of staggering odds. The awkward kid who once was an embarrassment to his teammates and an annoyance to his coaches, ended up becoming the most respected player in the history of the program, changing the lives of all he touched.

If you ever dreamed of a grand destiny but doubted yourself, GREATER will convince you that with effort, faith, and a belief in God's will for your life you can achieve beyond the limits of your dreams. Brandon Bullsworth's "Yes" and his commitment to God's grace is infectious. Fast-paced, fun and filled with emotion, GREATER is a film for dreamers, for doers and for those destined to be GREATER in their own way. 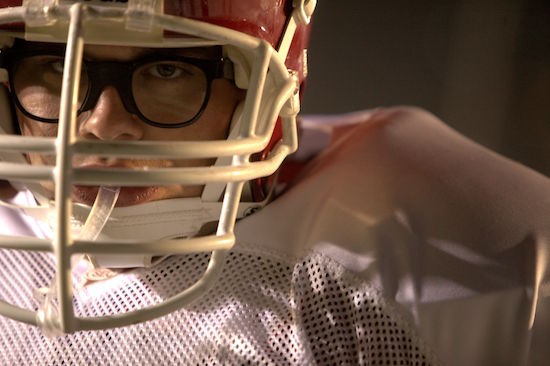 With the start of a new school year and a fresh chance to jump into academics, athletics and activities, GREATER's release provides a great chance for a family outing followed by a conversation about the role that faith can and should have in what we all strive to achieve in this life. Kids will relate well to Brian Bullworth's (Chris Severio) struggles to move beyond what others thought was possible for his life. The skeptics among us will relate to Brian's brother Marty Bullsworth (Neal McDonough) and his struggle to accept the unacceptable. And of course we moms will perhaps see a bit of Barbara Bullsworth (Leslie Easterbrook) in ourselves as we witness her desire to give her all for her family despite the many challenges she faces in her own corner of the world.

Rated PG for thematic elements, some language and smoking, this is a film that is definitely acceptable for older children and teens. Spoiler alert: Brian's story is emotional, and this may impact some younger children.

To learn more about the film or grab tickets for this weekend's opening in theaters visit GreaterTheMovie.com.