Online platform is the new “Roman road” for the new evangelization

According to a Digital TV Research forecast, the number of streaming video households in North America is expected to reach 76.5 million by 2020. This new pathway has expanded the field for engagement in the new evangelization to the TVs, tablets and smartphones of this time.

Dr. Tim Gray, president of the Augustine Institute, is urging us to take up the zeal of the early Church fathers who took to the Roman roads to spread the good news: “There is a new Roman road today. The new Roman road is the internet and the digital age. We need to take up these roads for the faith, for Jesus Christ.”

FORMED, a Netflix-like VOD and digital content service for both seeker and believer, connects users to this new “Roman road,” where the best audio, video, e-books and feature-length films are available from the Catholic worldview. With the producers of this content coming from such credible sources as Augustine Institute, Ignatius Press and Word on Fire ministries, the interest in the FORMED platform is skyrocketing. In just its first year, the number of users has grown to more than 150,000 registered users representing approximately 2,300 parishes. Dioceses are jumping on board as they recognize the value in being able to extend the ways parishioners evangelize beyond the four walls of their local churches. Over the past year, the dioceses of Baker, Cincinnati, Lincoln, Colorado Springs, Philadelphia and Cheyenne have been using FORMED with incredible results, and recently several new dioceses have adopted the platform, including Arlington, Birmingham and the largest diocese in the U.S.: the Archdiocese of New York.

In the Archdiocese of New York, 2.6 million parishioners throughout its 296 parishes will have unlimited access to the expansive FORMED content, at no cost for the next year.  And that reach can be multiplied to include anyone who lives within the boundaries of the archdiocese, whether they are Catholic or non-Catholic. A multi-day training in the archdiocese for priests, diocesan leaders, including youth ministers and directors of evangelization, concluded last week. 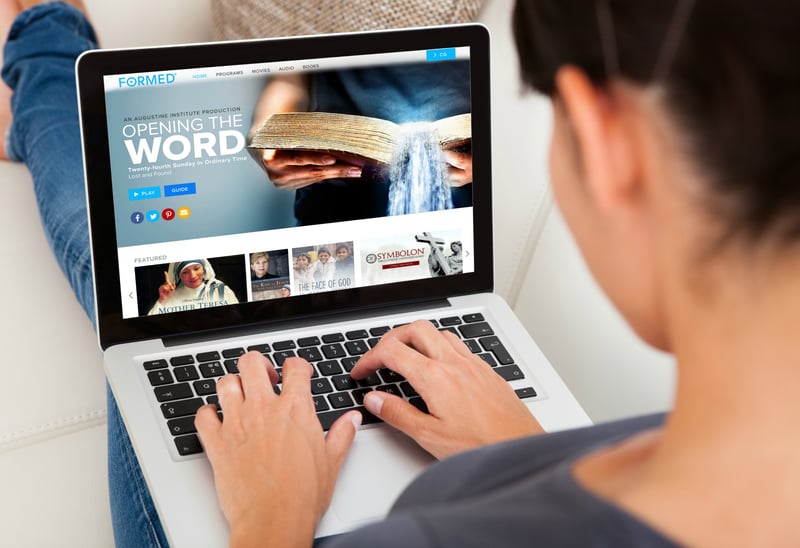 Image courtesy of the Augustinian Institute. All rights reserved Used with permission.

“FORMED has been amazing for evangelization,” said Dr. Edward Sri, vice president of mission outreach for the Augustine Institute. “Some of the stories we’re hearing have been just incredible.”

Christian Ketel from Colorado Springs was shocked when his mother left their Evangelical Protestant faith to convert to Catholicism. His mother shared a FORMED access code with him so he could understand what exactly she now believed. His exposure to the FORMED content played a significant role in leading him toward the Catholic Church.

“It has been an ongoing process to shift from my Protestant worldview to the truth guarded and proclaimed by the Roman Catholic Church,” said Ketel. “FORMED has been an invaluable resource in my journey towards a fuller and deeper understanding of our Faith, and it has helped bring me closer to our Lord Jesus Christ and Our Blessed Mother. What else could anyone ask for?”

Rev. Thomas Wray, director of the office of evangelization and discipleship at the Archdiocese of Cincinnati, also praised FORMED.

“Because Archbishop Dennis Schnurr has called us to create a ‘culture of vocations,’ there is no single better digital source of faithful, relevant and accessible Catholic teaching in cyberspace,” Wray says of FORMED. “FORMED allows us to reach our faithful’s lives in personal, portable and conversion-oriented ways.”