Pope Francis Asks: Will You Make MISSIO your Mission this Christmas?

Courtesy of MISSIO. All rights reserved. Used with permission.

Pope Francis has launched a revolutionary crowdfunding platform that connects change-makers in the Missions with a growing digital community of mission supporters.

Powered by the Pontifical Mission Societies, MISSIO provides direct access to project leaders in the Missions who are working on the frontline of service among the poor and vulnerable.  Members of the MSSIO community can connect with these project leaders and learn – in real time – how their support is making a difference in the lives of others.

Most importantly, MISSIO offers dynamic communication and fundraising tools that help build communities of support around mission projects within families, parishes, schools or even among friends and social networking groups.  By supporting a MISSIO project this Advent and Christmas – you will be offering a life-saving gift to the Missions.

Courtesy of MISSIO. All rights reserved. Used with permission.

At this time, there is also an extra incentive for joining the MISSIO community. Users who register for an account at MISSIO.org or on the mobile app by Midnight on February 2, 2017 will be entered to win two free tickets to Vatican City. 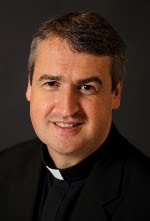 About the author: Father Andrew Small, OMI has been the National Director of the Pontifical Mission Societies in the United States since 2011. A Missionary Oblate of Mary Immaculate, he has worked in pastoral ministry in Brazil and Houston, Texas. He led the U.S. Bishops’ campaign against global poverty from  2004 to 2009 and served as the U.S. coordinator of recovery efforts for the Church in Haiti after the devastating earthquake in January 2010. He was an adjunct professor of international law at Georgetown University Law Center from 2007 to 2011, and he earned his doctorate in theology from the Catholic University of America. He is a member of the Council on Foreign Relations.