You are the captain of a pirate ship, but this isn't a normal pirate ship. You are flying among the clouds. On your journey, you will need to recruit the fiercest crew, collect the most relics, drink the most rum, and have the most doubloons. Will you be the best captain at the end of the game or will some other sea dog claim that title? Let's find out in Sea of Clouds! Sea of Clouds is a game for 2-4 players, ages 10+. It takes about 40 minutes to play and retails for $30. 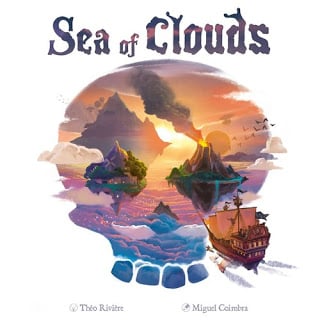 When I first introduced my wife to this game, she was a little hesitant about it due to it being about pirates. She figured it would have a lot of conflict (not entirely wrong) and that the theme would just not appeal to her. I reassured that these were sky pirates, like in one of her favorite movies Stardust. This was enough to get her to try it, but I had to watch Stardust again for the umpteenth time . . . a fair trade, I suppose. The part that I thought she would hate the most would be the conflict with the pirates, but she was ruthless in games and has beaten me every game, but one, due to the fact that she went heavy on recruiting a strong pirate crew.

The game itself is very simple to learn and easy to teach. The core mechanics are press-your-luck and set collection. It also has a three-round conflict resolution, similar to 7 Wonders. What I like best about the game is that not every card is going to help you immediately. Some of the relics will start out in the negatives, before they go positive, so you are taking a risk acquiring them, but the payoff will be huge if you succeed. I also like that the pirates go away after every boarding action. This prevents someone from getting a big lead in their battle strength and others from not being able to catch up in later rounds. The other aspect I liked was the artwork and the back of the cards. There are four different "suits" of cards with a variable value for each card. So when you are deciding whether or not to press your luck, you have an idea of what the cards could be, but you don't know the specifics.

I really enjoyed this game, as it is quick and fun. It's easy to set up and you can play it one or many times, and neither will take a long time. However, I found that the game experience varied depending on the number of players. Two players is a good game, but the conflict feels very direct with your opponent. With four players, you feel like you have some control over the person to your left and to your right, but there's that player right across from you that you will only affect in the most indirect way possible. Three players is where this game shines and the one I found most enjoyable. No matter your player count of 2-4, you will still find this game to be a fun experience. 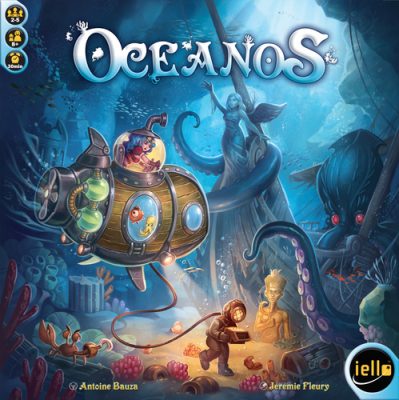 Antoine Bauza is the king of card drafting games. His genius gave birth to the supremely popular titles - 7 Wonders and 7 Wonder Duel. Now, he is back at again, but instead of visiting the ancient world, we are going deep underwater in the game Oceanos. Oceanos is a game for 2-5 players, age 8+. It takes 40 minutes to play and retails for $40. In this game, you are the captain of a submarine. You must upgrade your submarine so that you can travel further, explore/catalog more animals, discover more coral reef, and send your diver for treasure. Just watch out for the Kraken!

If there is one thing I can say about games from IELLO, it is that the artwork is something they strongly emphasize. Jérémie Fleury gives both a unique captain and unique theme to each submarine, giving each a high level of detail. The Kraken tokens also show distinct artwork, starting with a baby Kraken, moving up to an average Kraken, and ending with a full blown giant Mama (or Daddy) Kraken! The cards themselves have simple artwork, as there are a lot of symbols that too elaborate of artwork could detract from the gameplay. The animals drawn though have a little bit of style all their own.

As for the mechanics of the game, I love drafting cards. It is one of my top five mechanisms I like to play with. Where this game's card drafting differs from Bauza's 7 Wonders is that you don't start with a handful of cards each round and only ever pass them left or right. You start with a few cards, and everyone passes their "junk" to the starting player. Just remember that one man's junk is another man's treasure. The starting player just might find the perfect card for him among everyone else's discards. I think this is a clever improvement on the standard card draft. In 7 Wonders, especially at a max player count, you felt you were playing two+ separate games, as you really only ever had a modicum of control over the players to your left and right, not the people further down the table. In Oceanos, your choices affect everyone.

The only knock I have against this game is the way the submarines were cut and fit together. They were cut in a jigsaw fashion, which don't all fit together as nicely as one would like. Sometimes when you are assembling your submarine pieces, you have to force pieces a little more than others. Over time, you wonder if some of the smaller interlocking pieces will break off.

The one complaint aside, I found this to be a very fun and engaging game. When comparing it to 7 Wonders, I feel it is a lighter introduction to card drafting that is useful when teaching games to children and newer gamers. However, don't mistake this lighter nature of the game for an inferior game. The mechanics are solid. The art is beautiful. And the theme is strong. Add to it that this game has its own strategy to figure out. Which cards do I keep, and which cards do I discard? When should I use my fuel token to play that extra card? Which submarine parts do I upgrade, and which victory route do I pursue? Will you have the biggest coral reef and the most unique animals cataloged? Or will you go for the best submarine and the most treasure chests? Those are decisions you'll have to make on your own, but I promise you'll have a fun time exploring the ocean's depths!

These games were provided to me for free by IELLO Games in exchange for an honest review.