Lost Cities: The Original Card Game is a game that has been around almost 20 years. It is a two-player game for ages 10+. It takes approximately 30 minutes to play and retails for $20. In this game, you and your opponent are rival archaeologists seeking to mount the most profitable expeditions by unearthing civilizations from long ago. 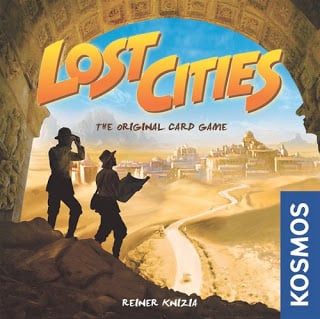 This game, rightfully so, is one of the best and highest rated two player games, and has been for a while. With only 5 columns of colors, you usually figure out early on which two colors you are focusing on and which two colors your opponent is focusing on. Then, you and your opponent basically fighting over that fifth color, providing just enough tension to be enjoyable without overburdening.

The game play is simple enough and the game is quick enough that you can teach it to kids younger than the recommended age 10. This will teach your child number sequences, risk management (wager cards), and when it's better to not pursue something, over pursuing something. However, what I really liked about this game was the artwork. It's got a nice, classical archaeological feel to it. And when you arrange each set of colored cards in numeric order, they form a complete picture of what exactly it is you're on your expedition for. If you're looking for a fun two-player game that will stand the test of time, I highly recommend Lost Cities: The Original Card Game.

[tweet "Games using #math, based on classic book and archaeology! Review by @StuartsStudy"] 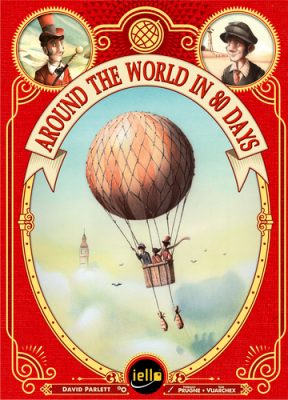 I consider myself a book snob when it comes to reading fiction. With the exception of J.K. Rowling, I won't read anything recently published and generally read the classics, J.R.R. Tolkien, or C.S. Lewis. Some of my favorite classics authors growing up were H.G. Wells and Jules Verne. Who am I kidding? They still are two of my favorites. When I heard that IELLO Games was producing a game called Around the World in 80 Days, I was intrigued. Around the World in 80 Days is a game for 2 to 6 players, ages 10+. It takes approximately 45 minutes to play and retails for $40.

The first thing that stood out to me the most in this game was the presentation of the box. The box is not your typical box, but is presented like a hardcover book with a cardboard sleeve. This is an unusual design, but one that fits the theme well. The color is a vibrant red with the iconic hot air balloon on it. What I like about this is that the red color very closely resembles the first edition of this book. I'm convinced this was deliberate, and I applaud them for the attention to detail.

The components are simple, but sturdy. You have a tri-fold board that looks like a felted table, with some hot tea, a pocket watch, and some travel documents. The game relies heavily on cards, of which most are mini in nature (not a favorite of mine but I understand the logistics behind it) and instead of generic pawns, you get top hats.

As for the game play, it is very solid and intuitive, which is exactly what I would expect since the creator reinvented his classic game -  Hare and Tortoise (the first Spiel des Jahres winner in 1979). The biggest differences between this game and the original is essentially that the game board is 80 spaces instead of 64, and theme of course! What I really like about the nature of this game is the mathiness (I know that is not a word!) involved in the decision making. "I have this much money, how many spaces do I want to go forward, and what space do I want to land on?" or "Is this a good time to move backward and gain some money?"

The game has a nice ebb and flow to it, which is unusual for a racing game. Usually, you want to just try and blow by your opponents as quickly as possible, but if you try that in this game, you'll run out of money quickly, and have to go backward a lot. Instead, timing is everything, and you'll have to decide when to discard rumors for optimal effect, how quickly to move, and how to time out the end game, so you have less than 10 Pounds in the end. I really loved this game and would highly recommend it!