You Can Become a Baby Whisperer With Christ 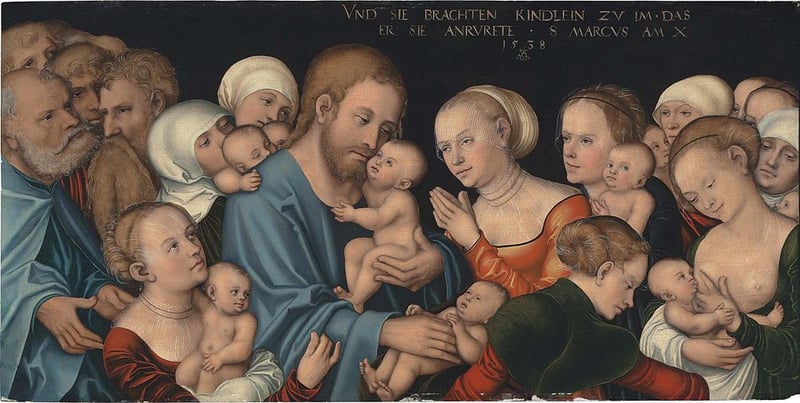 Attributed to Lucas Cranach the Younger [Public domain], via Wikimedia Commons[/caption]
The best way to communicate with babies is to connect with their inner spirits, in with, and through God; Jesus lived on earth as an infant and remembers what it is like to be helpless, dependent on adults to meet His every need for survival. I do not think He ever forgot what it was like to be a preverbal little being.
[tweet "Jesus lived on earth as an infant and knows what it's like to be helpless. By @mjmjuneau"]

Jesus is a Baby Whisperer

When we approach babies in the presence of the Holy Spirit, with Jesus and His gentle spirit, we can learn to be baby whisperers. Horse whisperers read a horse’s cues and respond in a way the horse understands, using body language and voice tones. A Baby Whisperer relates to infants in a similar way.
I soon discovered infants are complex little  people who see, hear, touch, communicate, receive information and who above all,  remember.

Of course, we can readily see babies react to loud, sharp or deep voices but a newborn will even turn to look at a voice he remembers hearing in the womb. It was amazing to watch my first granddaughter turn towards her mom and dad’s voices in recognition. When her parents cuddled her, she calmed down immediately because she was constantly reassured of their love and devotion while she was still in the womb. Now out in the world, she knew she is safe and protected especially in their arms. This is why all babies are sensitive to the approach of a stranger.

The most blatant personal example of a stranger /infant situation  I can recall is my six-month-old daughter. I was holding her when a tall, slender, older priest, dressed all in black, gently reached out to hold her. He smiled and patiently waited while Mary tensed her little body, drew back and looked him up and down very suspiciously. She drew back a second time, even further, and once again glanced from his head to his feet and slowly looked back at his face again. A third time Mary repeated the process. Suddenly she relaxed, broke out into a wonderful smile and reached her own arms out to lean forward so Father could pick her up.

That baby was receiving unspoken messages from Father’s facial expression, his tone of voice, body language and emotional and spiritual ‘vibes’ which radiated from his inner spirit. In short, even though Mary was not talking yet, she was not an idiot. We tend to forget that.

Michael and I were lucky because we somehow understood, right from the start, that we were relating to another human being when we communicated with our babies. I stopped and listened when they cooed and then I answered them when they finished cooing. It might sound foolish but I believe that this attitude instilled respect for themselves and others. I tried to treat them as people, albeit little people.

Sometimes family and friends were critical of my inefficient way of mothering. I just couldn’t make myself mother them any other way. Perhaps it was because I was not used to children. On the other hand, my mother, let us ‘help’ her even as toddlers. Basically, I just included the kids into our life as intelligent little people with feelings, opinions, tastes and preferences. If we respected each child’s preferences, they cooperated and worked alongside us better. In the end, this impractical, slow way of doing things made life run smoother.

Babies Are Preverbal, Not Idiots

Some people are intimidated by babies and little children. Just remember, babies are not idiots but smart little people who just can’t talk yet. However, babies are in tune with the Holy Spirit. Babies spirits are alive in Him. So, the best way to communicate with preverbal little people is to connect with their inner spirits, in with and through God.