Patrick is the patron saint of Ireland and the missionary credited with converting Ireland to Christianity. This we all know. Skip along to the shamrocks and the parades and that’s maybe all we know. That’s too bad. Patrick was a fascinating person, so here’s fifteen things worth learning about Patrick and about Saint Patrick’s Day.

Patrick’s work in Ireland went unrecorded during his life, but not unregarded, as many stories about his life bloomed. So the fact that Patrick penned a personal history is sometimes lost. It was written after 450 A.D., and it’s brief, partly because Patrick felt he was not a writer. At the end of it, Patrick says just how he wants his life understood:

If what I have accomplished in life has been pleasing to God, in even a slight way, then let no one attribute this to me in my ignorance. On the contrary, let them be in no doubt that it was all simply due to the grace of God.

2. Patrick was a Roman by lifestyle

Patrick lived within the Roman Empire in the 400s, during the time the Empire was failing, and had in fact retreated from Britain after nearly four centuries of occupation. After 407, no new coins were circulated in Britain—a clue that the Roman soldiers had left. Even so, the Roman lifestyle survived for a time. For example, we know Patrick lived in a Roman villa, wrote in Latin, and studied for the priesthood in Brittany, France.

3. Patrick was a Christian by upbringing

In the early 300s, the Roman emperor Constantine ended the persecution of Christians. And in 380, Christianity was proclaimed the state religion. By then the Church had become established and organized in the Roman world. Patrick notes that his father was a deacon and his grandfather a priest.

4. Patrick was a Briton by birth

No, Patrick was not born Irish. He says he grew up on the very edge of the Empire, probably among the Britons—a Gaelic speaking people who lived in the west of Roman Britain—what’s today Wales. He likely was a Briton himself, living in a place of mountains and moors, where soil is thin and the land is best for pasturing animals like sheep. In Patrick’s lifetime, western Britain was not heavily populated. Hamlets and farmsteads dotted the woods and hills. Patrick says his upbringing was “very simple and rustic.”

5. Patrick apparently had a Gaelic name

Scholars think that Patrick was named Maewyn Succat as a child, and that he chose Patrick as his name at ordination. The name Patrick means “nobleman” and is Latin in origin. In Irish Gaelic it’s Pádraig. 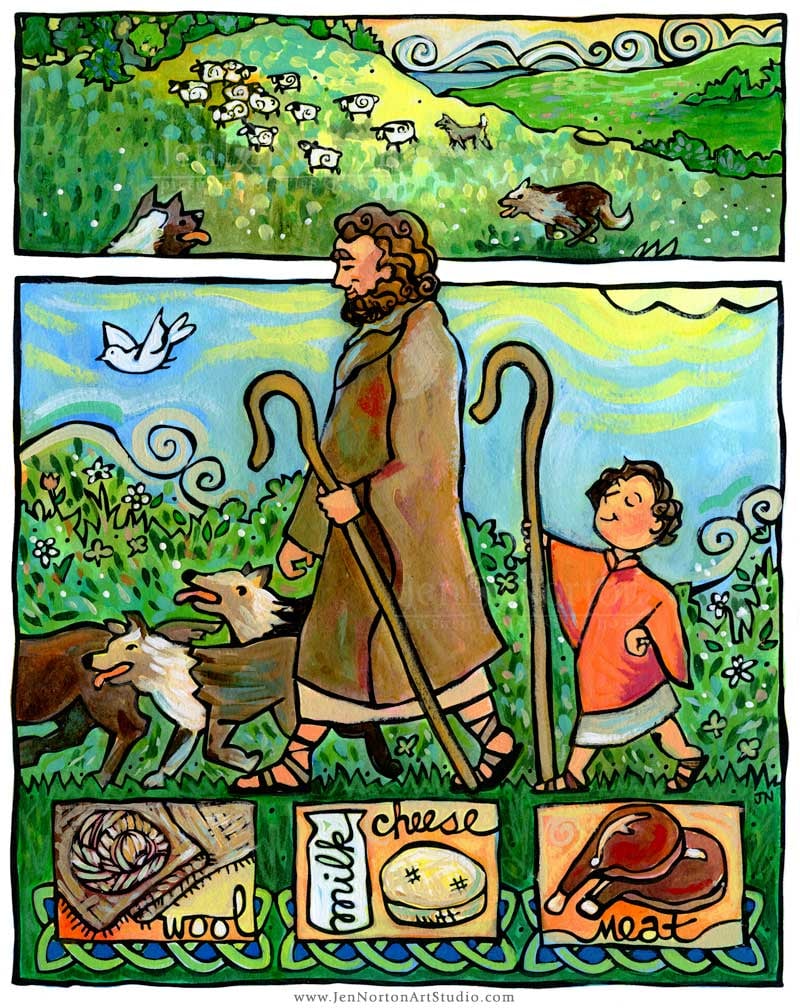 6. Patrick was kidnapped by Irish raiders

Patrick says, “When I was a rebellious 16 year old, I was taken captive to Ireland along with many others.” He was set to work shepherding. Kidnapping was not a rare event. As the Roman Empire fell apart, its wealthy provinces became attractive and vulnerable to plunderers, including Irish chieftains who had turned to sea raiding. (Ireland was not a nation with a central government. Maybe a hundred tribes occupied parcels.) Thousands of Patrick’s people were seized. Even while he was a slave, Patrick’s faith grew. As he says,

It was there that the Lord opened up my awareness of my lack of faith. … I turned with all my heart to the Lord my God…

7. Patrick was Irish by affiliation

After six years as a slave and shepherd, Patrick escaped by boat, but he returned home a changed person. He had a vision in which the voice of the Irish people called to him “… as it were with one voice: ‘We beg you, holy boy, to come and walk again among us.’” Patrick left his family again and returned to Ireland to bring the Christian faith to its people. He persisted in his efforts for maybe forty years, and his mission met with all sorts of resistance. He was robbed, attacked, and imprisoned, but Patrick never gave up. And he succeeded in converting thousands he says—both chieftains and commoners. It’s a fact that before the Irish, no people had submitted to the Christian faith who were not within the Empire.

8. Patrick became a preacher—but not a scholar

Patrick was a slave during the years he might have been a student, and he writes with embarrassment about his inability to write well and his lack of education. He says, “… I did not learn as others did, who drank in equally well both the law and the sacred writings…” Patrick did not allow his ignorance or the formidable education of fellow churchmen to interfere with his mission to the Irish. He says, “I never had any other reason for returning to that nation from which I had earlier escaped, except the gospel and God’s promises.”

Patrick detested slavery, in a way only a person who had been a slave might—at a time when maybe a quarter of the population of the Roman Empire were enslaved. Things didn’t get any better when the Romans left Britain. Slaves were considered merely another kind of property and trading goods. In his Confession, Patrick pleads the plight of women slaves, saying that they faced special threats and terrors.

Late in life Patrick confronted the issue boldly. Indeed, his public protest on behalf of slaves was singular and even revolutionary. Here’s how it happened: The soldiers of a British chieftain, Coroticus, attacked Irish Christians, newly baptized, killing and selling them off. Patrick wrote an open letter, condemning this attack in the strongest language: “…you, Coroticus, and your gangsters, rebels all against Christ, now where do you see yourselves? You gave away girls like prizes: not yet women, but baptized.” Imagine it: A fellow Briton and Christian was murdering and enslaving other Christians under Patrick’s care. It’s unclear whether or not Patrick did or could excommunicate Coroticus. Certainly he was calling down the wrath of the British Church on the chieftain. Apparently he failed; Patrick’s was one voice speaking against this most shameful embedded issue in human history. It’s possible that this confrontation put Patrick in deep difficulties, which he only hints at in his writing.

10. Patrick was not formally canonized as a saint

In the early centuries of the Church, holy people were normally recognized as saints by the local bishops. And in that way, Patrick was certainly understood to be one; the same is true of other Irish saints. Not to worry: Patrick’s feast day is included in the Church’s liturgical calendar.

11. Patrick’s staff had a name and its own story

Patrick is often portrayed holding a staff or crozier. It was called Bachall Isu, or “The Staff of Jesus.” According to tradition, the staff was given to Patrick by a hermit, who had received it from Jesus himself. Legend has it that Patrick stood on a hill and waved his staff to drive all the snakes of Ireland into the sea. In another great story, Patrick once preached to a gathering for so long that the staff took root by the time Patrick was ready to leave.

12. The shamrock is Patrick’s symbol but not the symbol of Ireland

Patrick is said to have used the three-leaf shamrock in his preaching, perhaps to explain the doctrine of the Holy Trinity. The link appears first in the 1600s on coins called Saint Patrick’s Coppers, which seem to show a figure of Saint Patrick preaching to a crowd while holding a shamrock. The idea of using the shamrock gains a little support in that the number three held significance to the Irish Patrick preached to and they had many triple deities, often sisters. The Republic of Ireland has had a harp, not the shamrock, as its national symbol. It’s found on Ireland’s coat of arms and its use goes back to medieval times.

13. Saint Patrick’s Cross is on the national flag of the United Kingdom

Saint Patrick’s Cross, a red x-shaped cross on a field of white, is not accepted by most Irish nationalists to represent Ireland. But it is found in the Union Jack, along with the Cross of Saint George and Cross of Saint Andrew.

14. Saint Patrick’s Day is a bigger American event than it is an Irish one

And why not? There are more than thirty million Americans who list their heritage as Irish. That’s about six times more people than the population of Ireland itself. Irish is second only to German as the most common ancestry among Americans.

What about the parades? Well, the Irish celebrated their presence in America all the way back in 1737 in Boston before the US existed. The parades began later in the 1700s in Boston, New York, and Philadelphia—and over the next century the celebration spread across the new nation. By the late 1800s, Saint Patrick’s Day parades became demonstrations of Irish Catholic pride and later yet of social and political power, as Irish Americans became established in a society that was predominantly Protestant Christian.

15. Saint Patrick’s prayer was not created by him—but it could have been

The Lorica or Breastplate of Saint Patrick is a prayer hymn whose lyrics are attributed to Patrick. But modern experts date it as much later, from the 700s. It certainly has the feel of traditional Irish blessings and prayers. Like other loricas, it is a prayer for protection—the word lorica means breastplate.

A lovely tradition has it that the prayer miraculously hid Patrick and his companions from ambush by some king’s soldiers. Afterwards Patrick’s group approached the king chanting, “Let them that will, trust in chariots and horses, but we walk in the name of the Lord.” Here are three portions of this prayer, from the Old Irish text—a fitting finish to this listing of infrequently asked questions about Patrick.

The Lorica of Saint Patrick

I bind to myself today
The power of Heaven,
The brightness of the Sun,
The whiteness of Snow,
The splendor of Fire,
The speed of Lightning,
The swiftness of the Wind,
The depth of the Sea,
The stability of the Earth,
The firmness of Rocks. 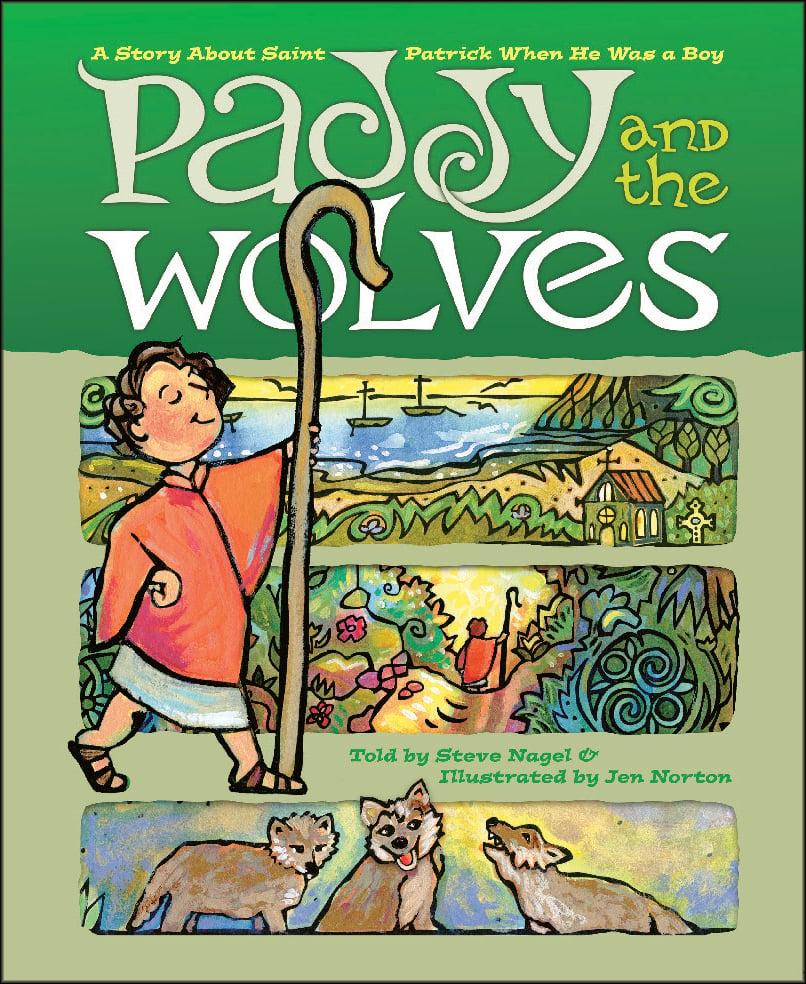 Illustration copyright 2017 Jen Norton. All rights reserved. Used with permission.
Just in time for Saint Patrick's Day!
Young Paddy can't sit still during prayers at home, but he's more than happy to help the Irish shepherd, Barra, watch sheep for the day!
But who will watch Paddy when he wanders into the woods? Paddy finds delights and dangers, and both deepen his understanding
of the prayers of his people.
Paddy and the Wolves imagines Saint Patrick as a young boy, weaving a story that uses the saint's childhood adventures to foreshadow events in Saint Patrick's adult life.
Paddy and the Wolves includes a bonus section with the Prayer of Saint Patrick, adapted for children, suggestions for celebrating Saint Patrick's Day at home (including an oatcake recipe), and also a biographical sketch. For an extra treat, there's a Paddy and the Wolves Coloring Book!

Buy this book through our Amazon affiliate link and support CatholicMom.com with your purchase!

Copyright 2017 Steve Nagel. This article is reprinted here the with kind permission of Peanut Butter and Grace where it was originally published. 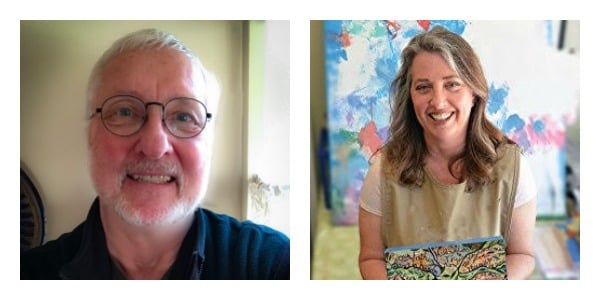 About the author: Steve Nagel was the art director and the editorial director for many years at Saint Mary’s Press in Minnesota. He and his wife Barbara have trekked along behind his kids and grandkids to Europe and all points in the US and Canada. Lately Steve does informal consultation with local organizations and helps create new publications for Gracewatch Media in Winona.

About the illustrator: Jen Norton believes that through art, one can hear the whisper of a mighty Creator. Her intention is that her art may cause you to pause and listen. Visual language was her first language and she never lost her passion for its ability to communicate for her. There was never a day she “decided” to become an artist. For Jen, there was just no other way to be.