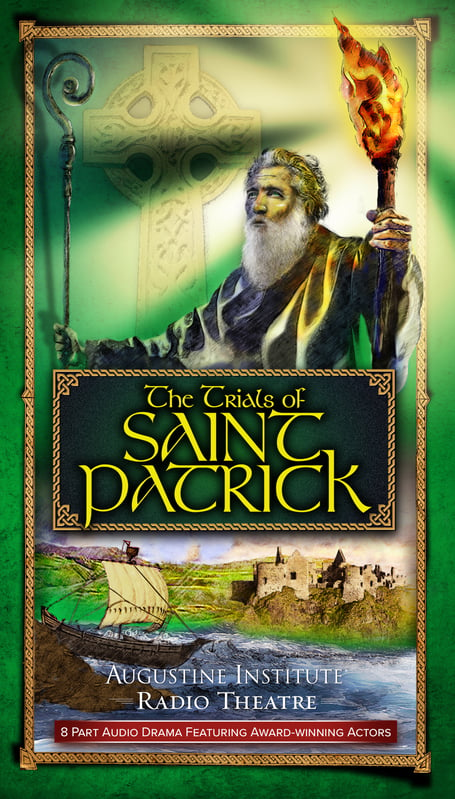 Saint Patrick is one of the most popular saints in the history of the Catholic Church. His remarkable life is now being told in The Trials of Saint Patrick, an eight-part audio dramatization produced by Augustine Institute Radio Theatre (AIR Theatre) about his holiness and dedication to the people of Ireland, who made him a beloved bishop.

The drama is based on the history and writings of Patrick himself. The son of a Roman official, Patrick is kidnapped and taken as a slave to Ireland. Six years later he escapes, but God sends him on an unexpected mission back to his captors where he battles pagan priests, powerful warlords and demonic forces to win the souls of the people who enslaved him. It’s an epic story of one man’s spiritual odyssey through hardship and loss, mercy and forgiveness.

'The Trials of St. Patrick' to be introduced to New York

Just in time for St. Patrick’s Day and in the city of the world famous St. Patrick’s Day parade, the event will feature Dr. Tim Gray, president of the Augustine Institute, and Paul McCusker, director of content creation for the Augustine Institute and writer/director of The Trials of Saint Patrick.  Promo clips of both Brother Francis: The Barefoot Saint of Assisi and The Trials of Saint Patrick will be shown as well as brief presentation on The Story of AIR Theatre, a cutting-edge initiative designed to provide audio dramas that are “sound entertainment” for the culture.

As the president of the Augustine Institute, Gray has greatly advanced the New Evangelization, as well as the renewal of Catholic education through graduate studies in scripture, theology and the New Evangelization. Gray is the author of Peter: Keys to Following Jesus, Praying Scripture for a Change: An Introduction to Lectio Divina, Mission of the Messiah and many other works. He also is the executive director of The Trials of Saint Patrick.

McCusker is an American writer and producer who’s best known as the Peabody Award-winning writer and director of the audio drama Bonhoeffer: The Cost of Freedom, along with the multiple award-winning audio dramatizations of The Chronicles of Narnia, The Screwtape Letters, C.S. Lewis At War; the classics A Christmas Carol, Oliver Twist and Les Miserables; and original works like The Father Gilbert Mysteries and The Luke Reports. He now serves as director of content creation for the Augustine Institute.