Our Lady: Queen of Ireland 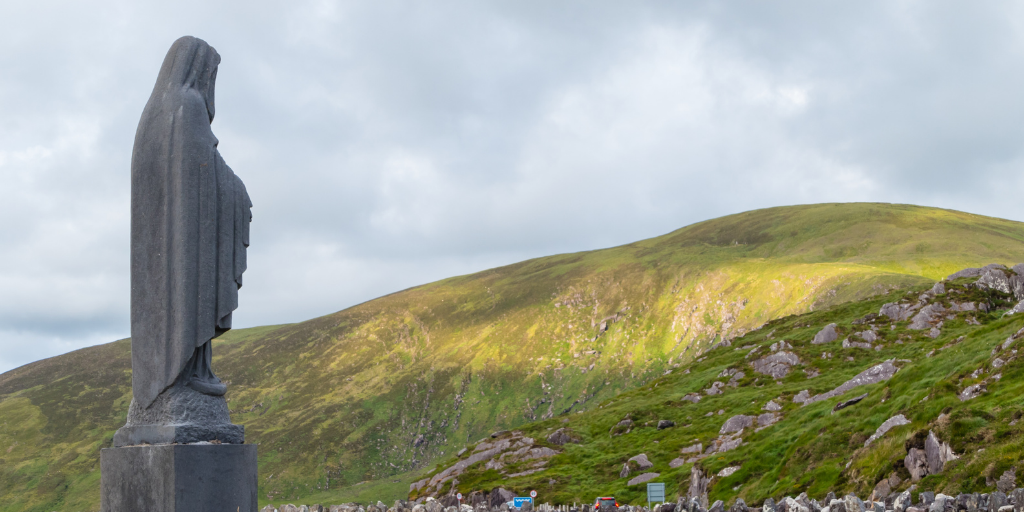 The Irish love Our Lady, as Kate Towne shows through their history, language, and given names.

St. Patrick’s Day is still two days away, but as soon as March hits, the land of my ancestors calls with its beautiful brogue, and the clean spring air and reemerging green remind me of the semester I spent there abroad and later trips back.

One of the things I love the most about Ireland is its deep history of faith, and its devotion to Our Lady is a big part of that. The “practice of Marian devotions were widespread in Ireland by the 8th Century,” only three hundred years after St. Patrick, and the illuminated manuscript of the Gospels known as the Book of Kells, written around the year 800 AD by monks who moved to a monastery in Kells, Co. Meath around the time of its writing, contains the “earliest extant illustration of Madonna and Child illustration in a Latin codex” (source, source). Movingly, Marian devotion in Ireland has seemed to increase during times of crisis and persecution.

The Confederation of Kilkenny declared Our Lady “Protectress of Ireland” during the Cromwellian wars of 1642, and single-decade rosaries were hidden in sleeves in defiance of the ban on devotional religious objects in the eighteenth century. During the famine of 1879, less than thirty years after the end of the devastating potato famine, Our Lady appeared to fifteen peasants at Knock, Co. Mayo with St. Joseph, St. John the Evangelist, angels, and Jesus as the Lamb of God. In the twentieth century, during the Irish War of Independence, Irishman Frank Duff founded The Legion of Mary, which worked with the poor of Dublin and was praised by Pope Pius XI in 1931. Today it has around ten million members, “making it the largest lay apostolic organization in the Church” (source).

Two other ways the Irish have showed their Marian devotion have been by incorporating her name into everyday conversation and by naming their girls Mary. In regard to language, for example, the greeting “Dia dhuit” (“God to you”) is answered by “Dia is Muire dhuit” (“God and the Blessed Mother to you”), and Eugene O'Growney wrote in 1898:

"In Scotland, where the Christian faith was carried by Irish missionaries, we find that even in the districts now for three centuries non-Catholic, the cry of suffering in the old tongue is still a Mhoire, Mhoire! O Mary, Mary! ... [which is in] Irish-Gaelic a Mhuire, Mhuire [a wirra wirra]. So also, a Mhuire is truagh (a wirra iss throoa), O Mary, pity.” "

Regarding its use as a given name, Rev. Patrick Woulfe noted in Irish Names and Surnames (1923):

"It is only about the middle of the 12th century that we find the first instances of [the use of the name of Mary] in Europe, whither apparently it had been brought by the devotion of the crusaders. Even in Ireland, there were few Marys until comparatively recent times. I find only a few instances of the use of the name before the 17th century. At present one-fourth of the women of Ireland are named Mary. The ordinary form of the name, however, is Máire, Muire being used exclusively for the Blessed Virgin Mary, and, therefore, the most honoured of all names of women."

The pronunciation of the form used as a given name, Máire, is variously given as MY-ra, MOY-ra, MAW-zhe, MAW-re, MEH-ree, and meh-REE depending on your source and dialect. It’s anglicized as Mary, Marie, Maria, Moira, Maura, and Maurya, and diminutives and pet forms in Irish include Maille, Mailse, Mailti, Mallaidh, and Mairin, while the diminutives and pet forms in English are May, Molly, Moll, Polly, Mamie, and Maureen. Having so many variations and nicknames make sense in light of the fact that Mary has been so popular in Ireland for so long—in 1864, for example, Mary was the number one name given to baby girls, nearly double that of the second-place name (Margaret) and making up a full 34% of the top ten girls’ names. By 2013, though, Mary had fallen to #81 in Ireland, mirroring the name’s decline in popularity in the U.S. as well. (source)

It’s also been popular in Ireland (and with Irish American families) to add Mary to another name to make a double name for girls—such girls might go by Mary or a nickname of it, or by the two names together (Mary Clare and Mary Kate are two combos that have a particularly Irish feel), or by their middle name exclusively (as is the case with my dad's mom -- Mary Loretta, but she went by Loretta -- and four of my dad’s first cousins in his big Irish family, three of whom are sisters, all of whom have Mary as a first name but go by their middle names). Even boys were often given Mary as a second or third name—one famous bearer is Irish TV personality Gay Byrne, whose given name is Gabriel Mary Byrne. And non-Mary Marian names have a good history of use in Ireland too, like Carmel, Assumpta, and Immaculata—the latter two being listed as “Irish” on name site Behind the Name and the only Carmel I’ve ever known was the owner of a B&B I stayed at in Dublin.

One of the most fun discoveries I’ve made, as readers of my blog will know (I talk about it often over there!), is that there’s an old Irish given name, Maolmhuire, which means “servant of the Blessed Virgin Mary,” that was still in "common use as a baptismal name" at the turn of the twentieth century (Maelmarius is the Latin form). How great is that! Even more fun, it’s often anglicized as Miles, Myles, or Milo—how wonderful to have explicitly Marian, twenty-first-century-friendly names for boys! (source, source)

Marian names are some of my very favorites, and I love seeing such widespread use among Irish families. I've said it before and I'll say it again: No matter your ethnicity or name taste, there’s a Mary variant that’s sure to work for you, and there’s no better patron for your little one to have.

I’d love to hear any stories you have of the use of the name Mary (girl or boy) in your families if you’re of Irish descent—and even if you’re not!