A theme I see in online name discussions with some regularity, regarding American baby naming, is that gender inequality issues are evidenced, emphasized, and encouraged by certain trends and traditions in baby naming.

This theme shows itself in the tone of frustration with which the idea of a boy being named after his dad is sometimes met, because girls aren’t named after their moms with the same frequency. Or when a mom who’s starry-eyed over honoring her dad with her little girl’s name is given a virtual raised eyebrow over honoring yet another man, and with her daughter’s name no less! Furthermore, it’s often wondered why don’t parents ever name their sons after the women in their families?

I actually really love looking at this particular subject—gender and naming—through Catholic goggles, because we kind of rock at it.

[Tweet "Look at #gender and naming through #Catholic goggles with @sanctanomina"]

There are actually many examples of names used for both boys and girls in non-English-speaking cultures, many of which are explicitly rooted in the faith. Consider the Spanish names Guadalupe, Trinidad, and Cruz—all used for both boys and girls (Guadalupe refers to Our Lady of Guadalupe, of course; Trinity means “trinity” and refers to the Holy Trinity; Cruz means “cross” and refers to the Cross of Crucifixion). Celeste is both a male and a female name in both Italian and French and can refer to the sky, but also to heaven, as it comes from the same Latin root that gives us the caeli in Our Lady’s title Regina Caeli (Queen of Heaven). Dominique, Hyacinthe, and Sacha are other French names used for both boys and girls, and all of them saints’ names (Sts. Dominic, Hyacinth, and Alexander). 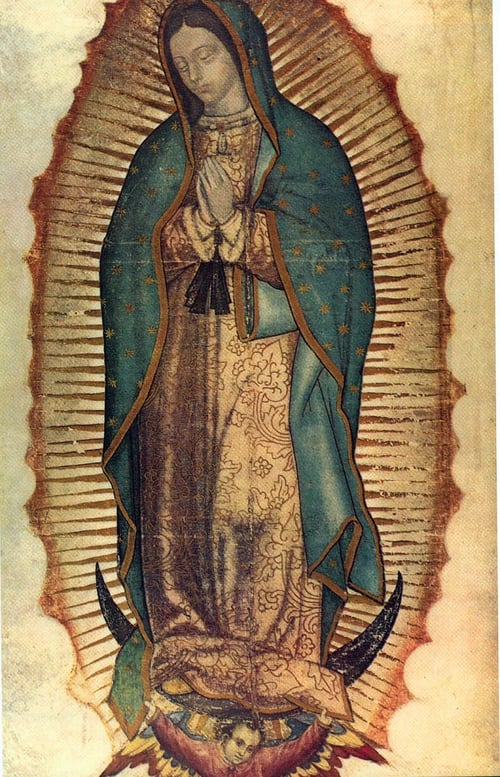 “Scolace appears to be the vernacular form of [Latin] Scholastica, the name of a saint who was the sister of St Benedict and the first nun of the order. It is found as a Christian name in England from the late 12th century until the Reformation.” (source)

It wasn’t that long ago that including a variant of Mary in one’s son’s name wasn’t that unusual. I love that Jean-Marie (French) and Gianmaria (Italian) are both common male names that are combinations of John and Mary. One of my readers shared with me that all of her uncles have Maria as a second middle name, and this article shares that many men in Ireland (including the author’s brother) have a form of Mary included in their names. (Speaking of Ireland, it’s responsible for one of my very favorite name discoveries: the old Irish male name Maolmhuire literally means “devotee of the Virgin Mary,” and has been anglicized as Miles/Myles and Milo!)

, via Wikimedia Commons
I think too of all the male saints with Mary in their names—off the top of my head, I can think of Sts. Clement Mary Hofbauer, Maximilian Maria Kolbe, Anthony Mary Claret, John Mary Vianney, and Josemaría Escrivá. I love hearing of current priests and brothers who have taken Our Lady’s name as part of their religious names (examples  here and here) (I even know of one who also took the name Therese!). These men don’t mind bearing the name of a woman!

Though current American baby naming practices are light on this tradition, I know of several families who have included a form of Mary in their sons’ given names, including this one, and others who have been specifically Marian in naming their boys (though the names are not as obvious as “Mary”), like this one.

Named for earthly mothers and other women

While boys are given the same first name as their dads oftener than girls are given their moms’ first names, I’m not sure it’s correct that boys are named for their dads oftener than girls are named for their moms. In my own family, my mom’s first name contains her mom’s first name, my sister has my mom’s name as one of her middle names, and several of my cousins and aunts have their moms’ names as firsts or middles. My readers offered their own great stories of moms’ names being passed down, and a compelling suggestion was that parents often use more creative ways to honor moms than to honor dads, resulting in less obvious namesakes, but namesakes nevertheless.

Boys aren't left out of the named-for-mom-or-other-special-women practice either. My husband and I named one of our own sons for my mother-in-law and my mom (first and middle name, respectively), and it's not uncommon for Mom's maiden name to make its way into her son's first or middle. In fact, one of my readers noted,

"... claims that boys are rarely named after women have always baffled me. I’m from the South, and I know oodles of boys who’ve been given their mother’s or grandmother’s surname as a first name."

, via Wikimedia Commons
And another gave a great example of parents she knows who named their son Garrett because of a special devotion to St. Margaret (genius!)