The board game industry is at an exciting time. Hundreds of games are produced every year. This is great for players in the hobby, but tough for designers and publishers, because they have to make a game that stands out in theme, mechanics, art, etc. One beautiful new board game called HOP! is designed for 3-6 players, age 6+. It retails for $70, but can be found for less than that depending on your retailer. 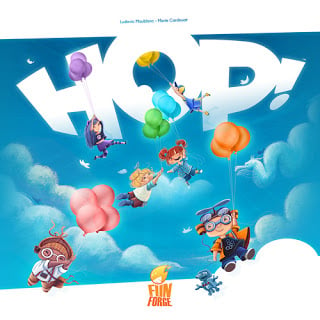 HOP! is a very fun dexterity game with lots of different and wacky dare cards. Some examples of this are The Schoolteacher where you have to remove your glasses or wear someone else's glasses or Night Flight, where the Skewerer has to close their eyes. This makes the game silly, crazy, and unpredictable. It also is going to keep the interest of kids, because no matter what role they are assigned, they are going to be up moving around, and that is a great element for family games.

Unfortunately, the components are the game's greatest strength, but also its greatest weakness. Let's start with the positive. The game board is 3-D, which adds a wow factor to the game when you set it up. The artwork is playful and full of vibrant colors that make the game pop! The figurines in the game are high quality, highly detailed, and honestly everything that the Tokaido miniatures should have been. So with all of these great things, I can see you scratching your head and asking, "Why is this bad?" It's bad because it's unnecessary and drives up the price exponentially! $70 for a family game is a lot of money, especially for a game with such a simple mechanic. The game does not need a 3-D game board or miniatures, and the dare cards could have been smaller in size. Your children, family, and friends could have still had a memorably fun experience without all this bloat of presentation, and I'm afraid a lot of people will pass on this game due to the high price, which is unfortunate. So while, I do recommend this game, I would recommend it only if you can find it on sale. 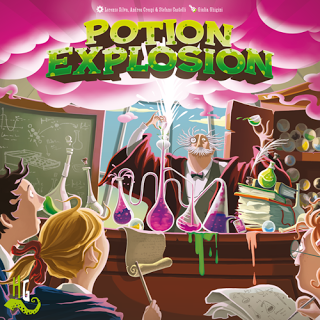 I think it's safe to say that many of my readers are big fans of Harry Potter, probably not as big of fans as my wife, but who is? When I heard and read about the game Potion Explosion, I thought, "This kind of sounds like Harry Potter. My wife will love this!" In Potion Explosion, you and your fellow opponents are students in Albedus Humblescore's potions class. With only four ingredients (Unicorn Tears, Dragon Smoke, Ogre Mucus, and Fairy Dandruff), you are competing to complete the most potions and score the most points. Potion Explosion is a game for 2-4 players, ages 14+. It takes about 45 minutes to play and retails for $50.

Potion Explosion is a very fun game with a great feel to it. The game is very simple to learn, as it really comes down to picking a marble that produces the most chain explosions, while also matching the potions you need to complete. The theme is very tongue-in-cheek with their reference to Harry Potter, but people who aren't fans of the famous wizard will not feel in the dark when playing the game. The age rating on this game is 14+, and I think a lot of that has to do with the marbles being a choking hazard, but children as young as 8, maybe even younger, can pick up this simple game. I personally consider this a great game to play with the family, young children, and non-gamers, as it provides a unique and dynamic experience that will suit these audiences well.

The components in this game are a mixed bag, which I have come to expect from games that bear the company logo Horrible Games (I'm looking at you, Steam Park.). The cardboard didn't punch out as cleanly as it could have and the paint on some of the marbles was chipping right out of the box. Does this take away from game play? No, but it is disappointing from an aesthetics viewpoint. The big positive of the components is the ingredient dispenser. It is a clever use of cardboard that is not only fun in its delivery of ingredients, but it also serves as a randomizer, with the player never knowing exactly where the marbles will fall.

After the components, my biggest complaint about this game is that it only plays four people. The groups I play with are generally bigger than four, so I feel like I will never get a chance to share this game with them unless some are out of town, which is a shame, because it is really fun and seems like it should have accommodated more people without needing to buy two games. Apart from my complaints, I really enjoyed the game, and my wife did as well, so that makes this an easy recommendation for me. There is supposedly an expansion coming out later this year, so if you are a fan of this game, like me, be on the look out for it!