Discover "Raising Kids with a Healthy Body Image: A Guide for Catholic Parents"

Raising Kids with a Healthy Body Image: A Guide for Catholic Parents is the unique approach to the body image crisis that impacts many children. From a young age, our kids are under immense pressure from a variety of sources that can determine the value of their bodies. But God has something to say about this as well. Pope John Paul II’s wonderful teaching known as Theology of the Body is the book’s guiding force, and along with Scripture and the Church’s Sacraments, this book is an excellent parenting tool to guide your child so they see the worth of their bodies as designed by our Creator. In addition, this book discusses the numerous causes of a poor body image and includes chapters on how to instill fitness and sound nutrition into your family life.

What motivated me to write it? After writing my first book, Improving Your Body Image Through Catholic Teaching, I gave several presentations to churches, men's and women's groups, young adults, etc. to promote the book and its message; and often I mentioned the follow-up book and discussed that its purpose was going to be a tool for parents to combat the poor body image their young son or daughter may suffer from. Inevitably, they were more interested in the current book due to their age and status in family life  (i.e. many were parents and grandparents). Plus, I think, independently, it's a unique idea for a book. That is, I felt instinctively that Catholic readers would find it interesting as well as practical and helpful to their parenting responsibilities.

Further, I purposely included the basics of Catholic teaching and sought to gently Catechize the reader so they could pass it onto their children. In addition, the book includes relevant body image basics and statistics to support the points I make.

There are several books on body image and even ones that attempt to assist those with body image issues, but this book is the first attempt to heal poor body image through Scripture and the teachings of the Church. It's easy reading and I try to keep the reader's attention with everyday stories about family life, especially as they relate to how we see our bodies. 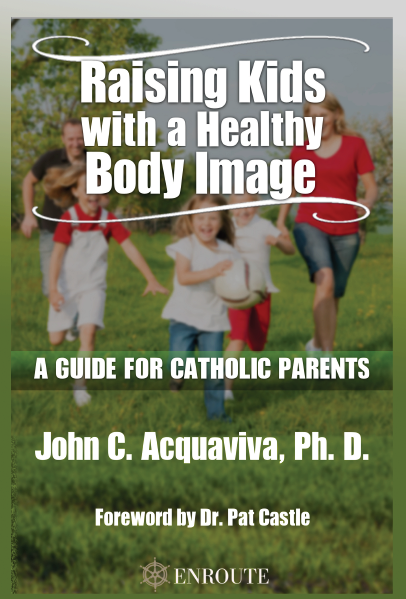 An excerpt from the book:

I have fully realized, now that I have four children and have been teaching for 20 years, that parenting and teaching have a few similarities. As a professor, I have always been taken a little off guard when students, years later, share that they were touched, motivated or simply educated in a special way by the content of that class. It’s especially surprising when those same students, in recollection, seem to not only have been disinterested in the class, but I was convinced they held disdain for it. As any parent has experienced, actions taken (codeword for punishment) are situations that we know our child won’t fully understand. But even a little bit of parental insight tells us that such actions are necessary to raise moral and ethical children.

This premise extends to creating a positive body image. If you deem a specific television program, movie, or attire inappropriate, you’ll probably be met with stiff resistance. So, comfort yourself with the fact that you’re protecting their soul and that efforts early in their life are most effective and warranted (Proverbs 19:18, 22:6). You’ve surely noted that this book contains as many “do’s” (suggestions for improving body image) as “don’t’s” (what to avoid that creates a poor body image). Perhaps what’s most interesting about body image and other issues where the goal is limiting something (rather than seeing progress), a parent will never really know how their efforts have paid off. In other words, it’s impossible to gauge how much impact omitting something has. That’s parenting though, isn’t it? Remember that protecting your child from everything that harms their soul may be an impossible task. What’s important is that we never lose focus on what is bad as well as what is good and make concerted efforts to teach the difference.

About the author: John C. Acquaviva is a professor at Wingate University and has given hundreds of presentations to Catholic and lay audiences.  His new book, Raising Children with a Healthy Body Image:  A Catholic Parents Guide (En Route Books and Media) and first book, Improving Your Body Image Through Catholic Teaching are both available as an ebook and hardcopy.  John is the host of Faith and Fitness on Radio Maria, and resides in Matthews, NC, with his wife Alecia and four children.