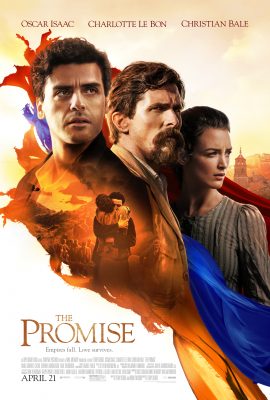 Opening tomorrow in theaters nationwide, The Promise takes a dramatic look at the horrors of the Armenian Genocide. But more than just a movie, The Promise is a movement, described in this way by the film's website, to create lasting change:

The Armenian genocide took place from 1915-1922, marking the beginning of 100 years of modern genocides. It launched the world into a cycle of violence and denial that has resulted in millions of lives lost, and entire people groups destroyed. Injustice is only enabled by silence, and this has played out in horrific ways over the past 100 years. Many times over, justice has lost to silence. So let’s start speaking up. Tell the world about the Armenian Genocide, and every genocide taking place across the globe.

I had the great honor of sitting down for a conversation with Director Terry George, perhaps best known for another genocide film Hotel Rwanda, and producer Dr. Eric Esrailian to discuss how their work with stars Oscar Isaac (Star Wars: The Force Awakens, Ex Machina), Charlotte Le Bon (The Walk, The Hundred-Foot Journey), and Christian Bale (The Fighter, American Hustle, The Dark Knight) could be fundamental in bringing the tragic episode to a larger level of consciousness.

It's impossible to watch this film and not be left with the urge to learn more about this often unspoken era and the 1.5 million souls who lost their lives. But The Promise hopes to do far more than simply provide a few hours of entertainment. Accompanying the movie is a #KeepThePromise campaign aimed at encouraging us to use our collective voices to remember not only against past injustices, but also to act courageously against those many human rights abuses occurring around the world in our modern times.

Empires fall, love survives. When Michael (Oscar Isaac), a brilliant medical student, meets Ana (Charlotte Le Bon), their shared Armenian heritage sparks an attraction that explodes into a romantic rivalry between Michael and Ana’s boyfriend Chris (Christian Bale), a famous American photojournalist dedicated to exposing political truth. As the Ottoman Empire crumbles into war-torn chaos, their conflicting passions must be deferred while they join forces to get their people to safety and survive themselves. The Promise is directed by Academy Award winning filmmaker Terry George.

I would call The Promise a "must see" film for adults and mature teens. Rated PG-13 for thematic material including war atrocities, violence and disturbing images, and for some sexuality, for me this "can't look away" film was not an easy watch. But as one who has traveled in Rwanda and seen firsthand the lasting impact of genocide, I can understand the efficacy of using a film's power to spread awareness and create change.

[Tweet "See @ThePromiseFilm, vow to #KeepThePromise to speak out about genocide says @LisaHendey"]

Yes, there is a complicated love story at play here that may draw some to theaters, and I won't discount in any way the lure of that dramatic tale's unfolding. But far more important here are the lead characters heroic "promises" to save lives, especially those of young children, who are for the Armenians the future of a society that is facing annihilation. 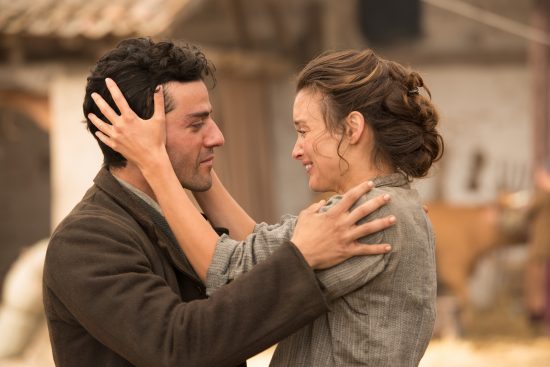 The import of this heroism pays off toward the very end of the film in a scene I don't want to spoil. I would urge you to watch carefully to the conclusion, when you'll see this William Saroyan quote emblazoned across the screen:

“Go ahead, destroy Armenia. See if you can do it. Send them into the desert without bread or water. Burn their homes and churches. Then see if they will not laugh, sing and pray again. For when two of them meet anywhere in the world, see if they will not create a New Armenia.”

As a beneficiary of communities where this "New Armenia" has been made known to me in friendships with faith-filled Armenian friends who treasure their culture and history, I now better understand why these men and women have not only clung to their past, but also been some of the most vocal and committed opponents I know against modern-day abuses. For them, history cannot be forgotten, nor must it be repeated.

The Promise tackles a challenging topic head on with powerful characters' heroic efforts coming together to sacrifice their safety to save the orphans in their charge. I hope that this film will do for the Armenian Genocide what "Hotel Rwanda" did to bring awareness to the Rwandan Genocide.

Films like The Promise challenge us to never turn a blind eye to the very real suffering happening in so many corners of our world. They remind us that each of us can help #KeepThePromise.

Images courtesy of Survival Pictures and used with permission