A unique collection of Father Brown mysteries is now available from Ignatius Press: Father Brown and the Ten Commandments. This set of stories links the intriguing detective tales by G.K. Chesterton with the Ten Commandments – often with a surprising connection, for the criminal is not necessarily the worst sinner in the story, nor is his crime necessarily the worst offense.

When Chesterton created the character of Father Brown, he brought a new dimension to mystery stories—the distinction between crime and sin. As the priest-detective applies his powers of observation to solve a case, he picks up clues about other offenses, such as those against the Sabbath or one’s parents. Father Brown’s main concern is not the laws of the State but the Commandments of God. 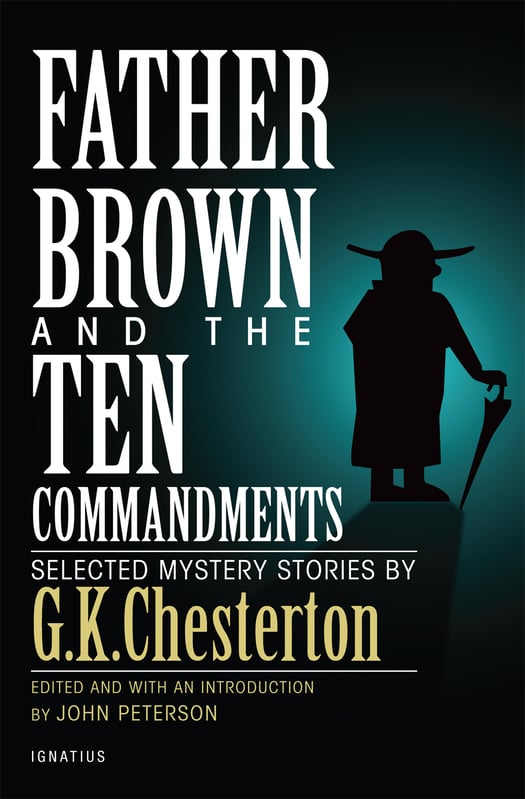 As Dorothy Sayers once wrote, G.K. Chesterton was “the first man of our time to introduce the great name of God into a detective story . . . to enlarge the boundaries of the detective story by making it deal with death and real wickedness and real, that is to say, divine judgment.”

This edition includes an Introduction by Chesterton expert John Peterson and footnotes not available in other versions, which help to clarify the literary and historical allusions made by Father Brown. It is based on the texts of Chesterton’s original editions, for assurance of authenticity, and is set in easily readable type.

John Peterson writes in the Introduction, “These stories are a treasure chest of fun and surprises, but also they reveal surprising depths of meaning, and all of Chesterton’s followers and all detective story enthusiasts owe it to themselves to take a new look at these easily overlooked masterpieces.”

“John Peterson is the world’s greatest expert on Chesterton’s famous priest-detective. His presentation of these particular Father Brown stories only adds to their craftiness and profundity,” says Dale Ahlquist, President of the American Chesterton Society.

Joseph Pearce, author of Wisdom and Innocence: The Life of G.K. Chesterton says, “Chesterton wore many hats—as an apologist, a biographer, a critic, a journalist and more. For many he is best known and loved as the inventor of the incomparable Father Brown. It is, therefore, a joy to see this new vintage collection of Father Brown stories brought together by the venerable and veteran Chestertonian John Peterson.”

“This is an excellent edition of selected Father Brown stories and a fitting tribute to Chesterton’s lovable sleuth and saver of souls. Using the Ten Commandments as a template, the stories are carefully annotated for the modern reader, introducing Chesterton’s sparkling English wit, charm and insight to a new generation of fans,” explains Fiorella De Maria, author of The Sleeping Witness: A Father Gabriel Mystery.

G. K. Chesterton was one of the most beloved and prolific writers of the 20th century. He wrote dozens of popular books on numerous topics, as well as thousands of essays. His books include Orthodoxy, The Everlasting Man, The Man Who Was Thursday, Father Brown Stories and many more.

John Peterson has written eight books and numerous articles for popular and scholarly journals.  A longtime Chestertonian, he has edited several of Chesterton’s works for Ignatius Press including volumes 12 and 13 of Chesterton’s Collected Works. Most noteworthy, perhaps, is Peterson’s The Return of Father Brown, published by the American Chesterton Society, which continues the adventures of Chesterton’s priest-detective for mystery-story fans.