I own and play a lot of games. Some games fall to the wayside and are given away, traded, or sold. Some stay in my collection for sentimental reasons or on the off-chance that I will get to play it once a year. Others stand the test of time for game play, art, strategy, and fun.

Evolution is one of those games, because in addition to checking all those boxes, it is also educational, and I'm the type of person who likes to constantly learn and grow (evolve, if you will) and also secretly teach my son, while he is just having fun and playing games. Evolution is a game for 2-6 players, age 12+. It takes about an hour to play and retails for $40. 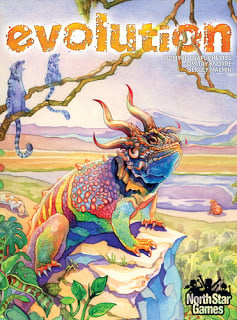 The first thing you notice about Evolution is the art on the box and cards. To put it mildly, it is gorgeous. There are a lot of games out there with stunning artwork, and in this golden age of board games, you have to have stellar artwork. Evolution takes the cake! The watercolor paintings on the Trait Cards are vibrantly colorful and make the game and more specifically your Species come to life. Catherine Hamilton has an amazing talent, and you don't know whether you want to play the game or put it in a picture frame and hang it on the wall!

Aside from the artwork, I think what I love most about this game is the way that the game plays. A lot of games, there are tried and true methods or strategies to winning or at least performing well in. Evolution lives up to its name and requires a strategy that is ever-changing and adaptable. If you are too rigid in the way you play, you will not win. For example, if you think, "I can just create a carnivore or two and eat my opponents for an easy win." WRONG! If your opponents play some traits that bolster their defense or increase their body size, then you will quickly find that your carnivore is eating your other species or dying of hunger. There's also strategy involved in how big to make your population size and how much food to put into the Watering Hole, because if your species is small, you might want to put less or negative food in, so that some of your opponents' larger population species starve. It's beautifully cruel, but is true to life.

The best part about this game is the level of devotion and dedication that North Star Games has put into evolving (See what I did there?) the game system. This first started by adding an expansion to the game called Evolution: Flight. In addition to adding new Trait Cards, this allows your Species to now have the ability to fly. They are harder to make and even harder to maintain, but it adds an interesting new dynamic to the game without over-complicating it.

For people who want an even simpler game to play with kids and your non-gamer family and friends, there is Evolution: The Beginning (a Target exclusive). This streamlines the game and is a great affordable option to introduce people to gaming without sacrificing art or quality.

For people who want a richer and even more thematic game play, there is Evolution: Climate, which can be purchased as a stand-alone game if you don't have Evolution or as a conversion kit, if you already have the base game. If you thought the theme was great in the original game, it shines even brighter with Climate, because you not only have to account for how much food is in play and what Traits your opponents have, now you have to worry about the weather. If it gets too hot, your larger species are going to drop in population. If it gets too cold, your smaller species are going to freeze to death. The events in the game make your brain burn a little more and make you think a little deeper! (Warning: Don't mix Flight and Climate together!)

I love this game and game system that North Star Games has dedicated themselves too. It is one of those games that is simple, but deep, light but heavy, and quick but engaging. There is so much replay value in this game, because you never know how much food is going to be available, how people are going to combine traits to make species, and how those species are going to interact with other species. The game is also educational, and not just in that it will teach you strategy or risk-reward analysis, you'll actually learn some science too, i.e., adaptation and the "evolutionary arms race" between predators and prey. Look for this game to be re-released June 1, and be on the lookout for the next game in this system, which is going to focus on Oceans and aquatic species. 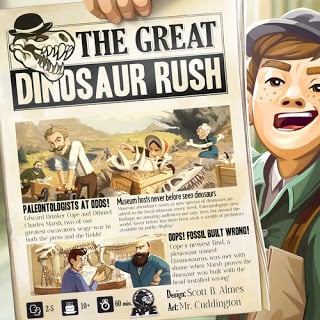 Paleontology has always been an interest of mine. The idea of digging up giant bones and putting the puzzle together to re-create these massive beasts always seemed like it would be fun. Therefore, when I heard that APE Games had created a board game that lets you pretend to be a paleontologist, I knew I had to give this game a try. The Great Dinosaur Rush is a game for 2-5 players, ages 10+. It takes approximately one hour to play and retails for $50. (Note: If you order directly from the publisher, you get exclusive paleontologist and dinosaur meeples, which are always better than generic cubes!)

Overall, I found this game to be an enjoyable experience, which is what I have come to expect from games designed by Scott Almes. The biggest positive I have from this game is the artwork. From the box, to the paleontologist cards, to the dinosaur bones cards, each one was a work of art and I feel like these artists went above and beyond on this game. The second thing I liked was that the game could be considered educational. Both the paleontologists and the dinosaurs in this game are all factual. I've seen a lot of games, just make up clever names to add some humor or theme to a game, but instead we get actual paleontologists, fossil hunters, illustrators, and museum directors. I didn't realize that there were so many women involved in paleontology. That was eye-opening to me.

Where I feel mixed on this game is the construction of the dinosaur. Don't get me wrong, this a very fun experience. You take your little dinosaur bones, and behind your screen, you are arranging and rearranging the pieces and trying to make the best dinosaur you can. This was a blast and crunched your brain a bit, but even with everyone doing this simultaneously, if you have one over-thinker, it will drag this phase out longer than it needs to be. The other game play element I have mixed feelings on is the take-that nature in the game. You can sabotage, use dynamite, and steal from your opponents. Unlike other games, this one penalizes you with notoriety tokens. If you have the most at the end of the game, you will lose that amount in points.

The mixed feelings aside, I really did find this to be a fun game, and I look forward to playing it more times and trying out different paleontologists, as each of them have their own special ability that provide both asymmetric starting powers and variable game play.