Some people absolutely love being outdoors. There's the sun, fresh air, nature, etc. I am not one of those people, nor is my wife, but somehow my son is. (Go figure!) For me, I'd rather be indoors without the bugs, the pollen, and the dirt. Therefore, when I heard about the game Lost Woods, I wondered if I would like this theme. After all, I have only ever been camping once (it was miserable) and being lost in the woods and trying to escape seems like something I would hate in real life, so why would I like it in a game? However, the art drew me in and I decided to give this game a shot! Lost Woods is a game for 1 to 6 players, ages 12+. It takes approximately one hour to play and is currently on sale for $39. 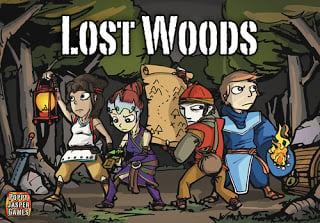 I have played a lot of tile-laying games, and this one provided a fun and unique experience. For starters, there are a lot of components in this game, which provide unique experiences each play through. Sure, you'll see the same map tiles and weapons from game to game, but the order in which you see them will be unique, and since the game primarily revolves around dice rolls. Some times the dice are in your favor and other times, it seems like you only roll ones.

The game's theme has a nice flavor as well. I personally hate camping, but this game made it seem like an exciting experience. The artwork on the map cards is simple in that it is clear and not distracting, but there are little nods to other media at times, which make you smile when you see it. My particular favorite is the card with the wardrobe and the lamppost, which pays homage to C.S. Lewis' The Lion, The Witch and The Wardrobe. Speaking of the art, I really love the weapon tiles. The art on them has a cartoonish feel to them (I say that in a good way), and the weapons themselves are equal parts thematic and silly! You have stuff you would find around a campsite (paper towel roll, flaming marshmallow, cast iron skillet, and a fishing pole) and off-the-wall stuff (unicorn horn, elephant gun, and nunchucks). This mixture of weapons adds theme when you need it and tension-breaking hilarity when you need that. "I defeated that monster with a smelly sock on a stick!"

The game play itself is simple to learn, making it a good choice for children and families. What is especially nice is that the game can play six players, a win for those with a large family (or large game group)! More serious gamers may not like the random feel of the game with the monsters that show up, the dice rolls, and general luck feel of the game at times, but there is a Big Map variant to the game, which increases the play time, but also adds more spells and caves to the game. This will give you a few more ways to employ some different strategy into amassing the biggest stockpile of gold. There is also a Survival cooperative variant for people that don't like to compete with others, but it can only be played with 1 to 3 players. Overall, I found the game to be enjoyable and appreciate the detail and care that went into the creation of this game. From the game play to the art to the components, it was clearly a labor of love. Be sure to check out the second game from Poppy Jasper Games - Gnomi, a quick little card game you can play anywhere! 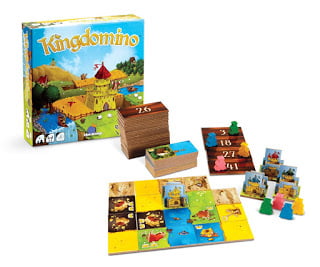 Any good king is not happy with the size of his kingdom and is always looking to expand it. Be it fields, lakes, or mountains, they should belong to you and not the lord next door. In Kingdomino, you have a chance to do just that. Will your kingdom be the most valuable at the end or will the rival king claim all the choice land for themselves? Kingdomino is a game for 2 to 4 players, age 8+. It retails for $20 and takes approximately 15 minutes to play.

Kingdomino is nominated for the Spiel des Jahres (Game of the Year), and it's no wonder why. With the low price point, simple rules, familiar game play, and bright art/colors, it's an easy recommendation for families. There are meaningful decisions (Do I go for more crowns and go later on the next turn, or go for more of this landscape and go early next turn in hopes of better tiles?) Some people might find the game to be too easy, but there are additional rules you can add to up the challenge of the game. My personal favorite is "The Mighty Duel" (only playable with two player) where you can build a 7 x 7 grid. Bruno Cathala took this simple design and knocked it out of the park!