"The Glory of New Church of St. Francis of Assisi." Copyright 2017 Dino Carbetta. Used with permission. All rights reserved.

Dino Carbetta is Italian, but you would never guess it from talking on the phone with him. His Italian grandparents settled in Ohio but he has an accent from living in Atlanta most his life, and schooling in Tennessee. Interesting fact; back in the '60s while he was growing up in the Atlanta Diocese, there were only 30,000 Catholics. He had to travel outside of Atlanta to go to a monastery for Mass. Today there are 1.1 million Catholics in the Atlanta Diocese!  You might already be one his 4500+ fans on Facebook, but if not, sign up quick. I count myself as blessed to have the pleasure of  frequently seeing his amazing work cross my feed over the last two years. Dino has been a commercial photographer for 30 years, and trained at one of the top photography schools in the world, Brooks Institute in Santa Barbara, CA.

I asked to interview him because his art is the kind that grabs and holds my attention. His art is something that I could look at every day on my walls and never get bored. "Ominous skies over the Papal Basilica of St. Francis of Assisi" is probably my favorite photo of all. The location is Italy, and the colors are saturated to a point where it seems magical, mystical, and fantastical. From those who have described their account of heaven, they have described a similar saturation of color and brilliance. Like most artists, he is a perfectionist at his work. He is what I would call a photographer artist, taking his raw image, and bringing out the most important details, by sharpening, deepening, and cleaning. He zeros in on what he feels is most important and magnifies its beauty. He spends 65 to 70 hours a week perfecting only the best of his images. His style takes the beauty of the raw image, and artistically adds even more drama with light and color. He told me that he could never reproduce a particular image, because each one can take up to 500 steps to reach the point of the image you are seeing today. 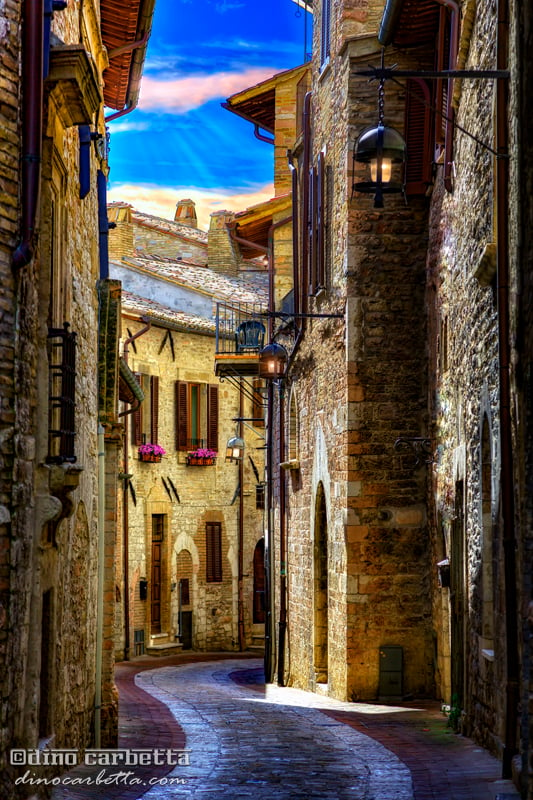 "The guiding light of Santa Maria Maggiore and the New Church in Assisi." Copyright 2017 Dino Carbetta. Used with permission. All rights reserved.

Obviously Italy captured his heart and he hopes to retire there one day. Dino has photographed some of the places that were most captivating to me, namely Assisi, Sienna, and the Amalfi coast including Positano. I asked him what his three most favorite churches were.  "Basilica of Santa Maria Gloriosa dei Frari in Venice, which is somewhat plain or ugly on the outside,  but inside is vast. Artwork served to teach the illiterate people of the times, and served as a glimpse of heaven. In the Sienna Cathedral every crevice has artwork and is hard to capture on film. The church was built over hundreds of years. The main church in Sorrento is the Duomo, also known as the Cathedral of San Filippo and San Giacomo, which is concealed right in the heart of the town. The photographs of the crucifix are from that church." 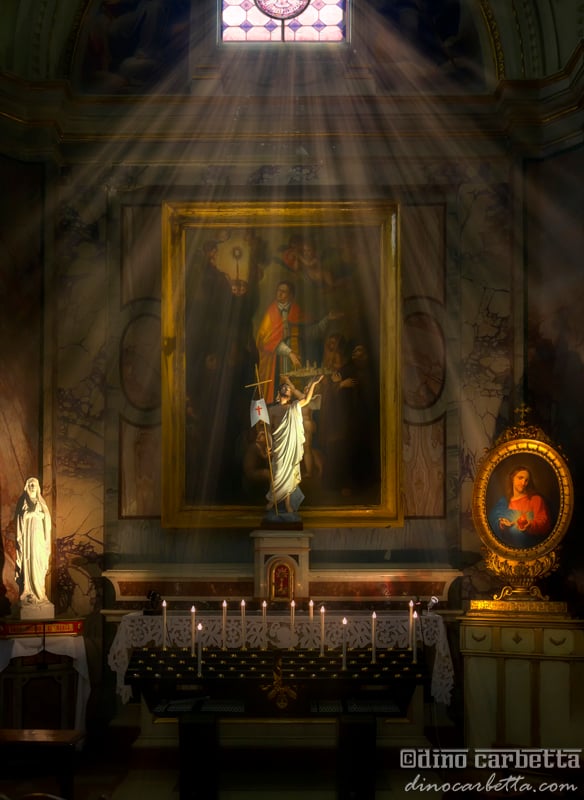 Dino and I talked about the fact that in days of ancient churches built in Italy, that the illiterate people relied on the artwork and the stained glass to remind them of the stories of the Bible and their Catholic heritage. The churches were often plain on the outside and wonderfully adorned inside to give the people a glimpse and taste of heaven. I see Dino as someone who shares that glimpse of heaven through his artwork, especially the sacred places. Not everyone can travel to these beautiful locations, so Dino brings it to your home.

When Dino went to Italy for the first time 5 years ago, he bought the best Canon camera money would buy and arrived very well versed in Rick Steves' sightseeing highlights. Although Dino stuck to his planned itinerary, he was snapping photos right and left like a kid in a candy shop. He felt he was finally home. As luck would have it, right outside the Basilica of Santa Maria Gloriosa dei Frari, he thought he saw Rick Steves and called out to him. Sure enough, Rick was filming new segments. As Dino traveled around the country, he found that 80-85% of his images were religious and Catholic in nature.

When he got back to the States and started working through all his images, he refined his new style. He built a website a couple of years later and started displaying those images for sale, increasing the gallery bit by bit. Luckily he also started a page on Facebook displaying those images as well. Dino frequently hears that his images have brought people closer to God and are uplifting. Those images have brought people peace. Some have approached him to do coffee table books, or art for Catholic stores. There is even an offer to do a Catholic photography pilgrimage to Italy. Dino is waiting for just the right opportunity. 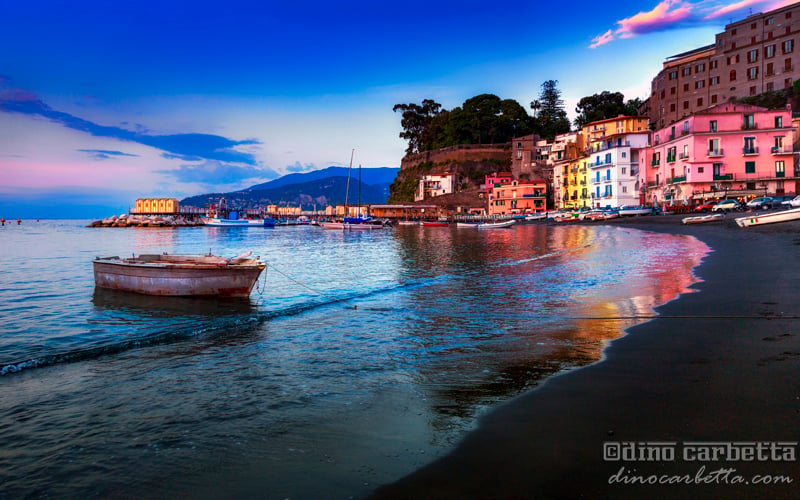 In traveling through all the sacred churches of Italy, Dino always had the reverence that is often forgotten by those touring the churches of Europe.  When he would go into those sacred spaces he knew he was home. I encourage you to browse through the gallery of sacred images as this article is not long enough for me to include the photographs I love. It is honestly hard to choose. And when you do make a choice, you will bring your own " Glimpse of Heaven" into your home or office. His photographs will transport you, your family, clients, or patients to a more serene and contemplative place. His photographs are available loose on rag paper, or on wrapped canvas from $140- $1500 depending on size. Although I am a lover of sacred art, I would also want to take home the landscape photos of the Amalfi coast and Canals of Venice.

Dino tells a funny story about his excursions to Cinque Terre and the "popeye" boat he chartered to take shots from the sea of the coastline.

"This image was created standing on the rooftop of the antique 28 foot Angelina’s galley with my arms around the mast and my 25 pound camera bag strapped over my shoulder, creating a human tripod for support. I could not help noticing tourists in each village photographing our boat as we sailed up and down the coast; perhaps it was the image of a silly photographer hanging on for dear life as the waves wobbled the boat side to side in anticipation of a splash down?!"

What artists go through to get the perfect shot, right? 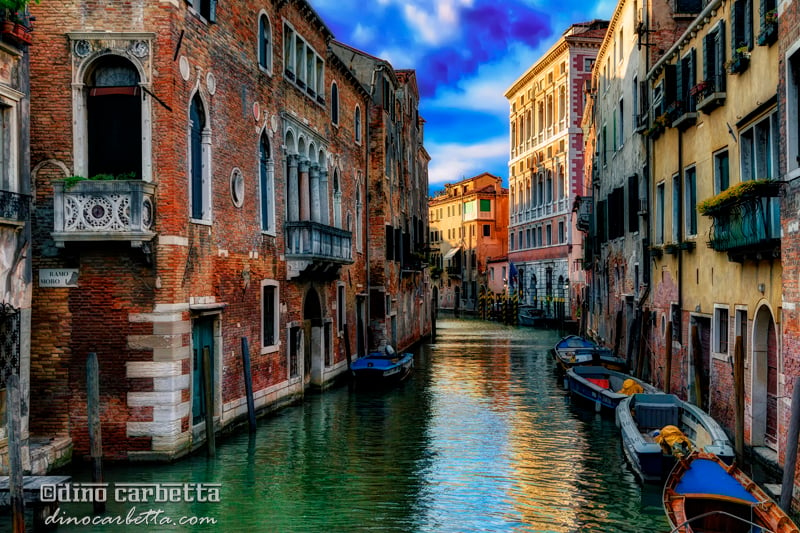 To browse all the galleries, please visit http://www.dinocarbetta.com