Allow Your Motherhood To Shine

In Matthew 5:15, Christ tells us not to put our lamp under a bushel basket, but rather to let it shine throughout the world. In this culture, what better way is there to spread Christ than through the vocation of motherhood?

A few months back, I was reminded of this powerful lesson while at a preschool pick-up when I overheard some young, college-aged girls discussing how unattractive motherhood seemed to them. These beautiful young women served as nannies for working moms and I was shocked to hear them openly express their distaste for our lives right outside the youngsters’ classroom door, surrounded by other mothers.

The conversation began with one of the girls asking the others, “Do you ever want to have children?” The first responded, “Maybe one,” and the other said, “No way. I want a dog.” The conversation then took a nasty turn as they began discussing their perception of motherhood, emphasizing the expenses, burdens, and impact it has on a woman's body. Their sad conclusion was that a dog was a better decision despite being "in love" and having boyfriends.

My heart began to break as I heard how the devil had confused such intelligent, well-educated women. How have we turned the precious blessing and gift that motherhood into a thankless and stressful job that most moms complain about daily? Have we personally contributed to others viewing motherhood as unattractive and even allowed these negative feelings to penetrate our own heart?

[tweet "Have we personally contributed to others viewing #motherhood as unattractive? by @emilyjaminet"]

Just think: A few generations ago, the vast majority of women were stay-at-home moms. Now, we’re at a point where many women don't even see a purpose in settling down and having a family!

I encourage you to allow your vocation of motherhood to be a vehicle to touch other people's lives. Allow your love for Christ to be the engine that fuels your motherhood. Recognize that your children are not a means to an end, but rather souls that have been entrusted to your care until they return to God the Father for all of an eternity. With this perspective, it’s much easier to cherish the gift of your children.

To conclude the story, I approached the three young women in the midst of their conversation. After being a mother for 17 years, I knew I was being called to speak up, especially since we were not in a nightclub but rather outside a preschool classroom. With the help of the Holy Spirit, I overcame my intimidation and gently intervened in their discussion beginning with having a large smile on my face I said, “Excuse me. I just want to share that motherhood is a gift, and dogs and children are not the same.” For every mother knows that after having children of your own it is very different than taking care of other people's children.

For many of us, these truths seem ordinary and obvious, but it was clear to me that these young ladies did not realize what a gift they planned to miss out on, thanks to the contraceptive mentality of society. My comments were shared with love and sincerity but the response was telling as one of the girls responded with a question in return, “Have you ever had a dog?” In that moment, I was happy to be a dog owner and told her, “Yes. And I have children,” including the adorable redhead I was currently wearing in a sling. Maybe God allowed me to be a dog owner just for that one moment, to provide evidence to them that I knew the difference between animal companionship and the love of a child.

I encourage you to take some time to reflect on the gift of your own motherhood, the blessing of spiritual motherhood and the children that you have made room for in your heart.

Motherhood matters and if we all embrace this gift with joy, see its purpose and, most importantly, serve with love, we will truly impact generations to come and our light for Christ will shine brightly in this dark and broken world. Allow your motherhood to be a light among the shadows. 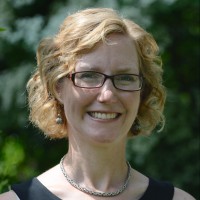 Emily Jaminet and her husband have 7 children. Jaminet is the Director of Sacred Heart Enthronement Network www.enthronements.com, shares "A Mother's Moment," a daily radio reflection, She is the co-author of Divine Mercy For Moms: Sharing the Lessons of St. Faustina and The Friendship Project . You can read more of Emily’s work at EmilyJaminet.com,Divine Mercy for Moms, and The Friendship Project Book.