This spring, I instituted a writing contest at my alma mater, Saratoga Central Catholic (SCC). The St. Francis de Sales Writing Contest focuses on the intersection of faith and writing through the chosen topic, which this year was: “What Confirmation name did you or will you choose, and why?” The contest was open to tenth- and eleventh-grade students; they were directed to read my CatholicMom.com article on guidelines for choosing a Confirmation name before writing their essays, which includes a quote by their local bishop, Bishop Scharfenberger.

The contest was judged by Ms. Kate Blain, editor of the Albany, NY diocesan newspaper The Evangelist; Mr. Giovanni Virgiglio, Superintendent of Schools for the Albany Diocese; and Fr. James Ebert, pastor of Mater Christi parish in Albany, NY and former chaplain of SCC, as well as a 1999 graduate of the school. The judges conveyed what a hard decision it was, and how thoughtful the students were in their essays. 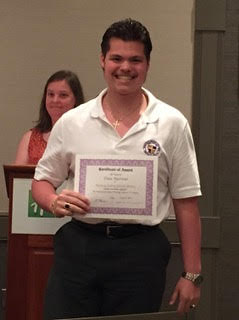 Courtesy of Dean Martinez. All rights reserved. Used with permission.

Names are important. They signify whom we are and give us individuality from others. However, we cannot name ourselves. This crucial decision is left to our parents, but our faith allows us a chance to add to our names and make it truly ours. In our church, the sacrament of Confirmation is this second chance, and personally, I believe this is an opportunity to look for inspiration from the past to guide our futures.

My family is from Naples, Italy. My father was born there and moved to America when he was five. He always tells of his favorite times growing up as a child there, the smells, tastes, and beauty. One story particularly intrigued me when I was young, the story was of Mt. Vesuvius and how his mother saw this volcano erupt for years and years without end. He told of the fear this volcano brought, but also of the hope these people had, the hope to rebuild a new life. A second chance.

For me, my choice of a Confirmation name is quite simple, Gennaro. St. Gennaro, or St. Januarius, is the patron saint of both volcanoes and my father's home city of Naples. St. Gennaro was a bishop during the fourth century. At this time, Christians were still persecuted by the Roman Empire. Due to St. Gennaro's belief in God, he himself was persecuted. He was thrown into flames, but when he prayed to God, the flames did not hurt him. Similarly, when he was thrown in with beasts, he was unharmed. And Neapolitan tradition and myth says that a vial of his blood, when brought close to his statue, will begin to transform to liquid form and bubble. Because of these reasons I have chosen Gennaro as my [Confirmation] name.

Perhaps though, there is more meaning to this decision than just bubbling blood and invincibility for me. Mainly, throughout my life I have brushed death many times; for instance, I was in a terrible four-wheeler accident one summer; another time I nearly drowned. However, I have always escaped without being seriously injured, similarly to how St. Gennaro could not be harmed because of his belief in God. Secondly, the claim that St. Gennaro's blood boils is symbolic of my family's blood. While it may not boil near our family portrait, it boils rather in the form of family and passion. These two symbolic coordinations between St. Gennaro and my life were further contributing factors in my decision.

[tweet "Names are what make us individuals in our increasingly uniform society."]

Names are what make us individuals in our increasingly uniform society. This is why the power to give yourself a name that is important to you in both a worldly way and a spiritual way is so spectacular. Because with this added section to a person's name they must always think of how that person, their role model, would act in certain situations, and it forces them also to always remember God and all his good works and grace he gives to us.

Essay copyright 2017 Dean Martinez; printed here with the kind permission of the author and his parents.

About the author: Dean Martinez attends Saratoga Central Catholic School in NY entering 11th grade in the fall. He is currently class President and a lawyer on the SCC Mock Trial Team. Future plans include applying to Skidmore College and pursuing a profession in either law or business.

What happens when Christian dialogue ignores the Creed?
Read
Why Every Catholic Should See The Third Way
Read
See What You Believe and Become What You See
Read