A Brief History of the Rosary 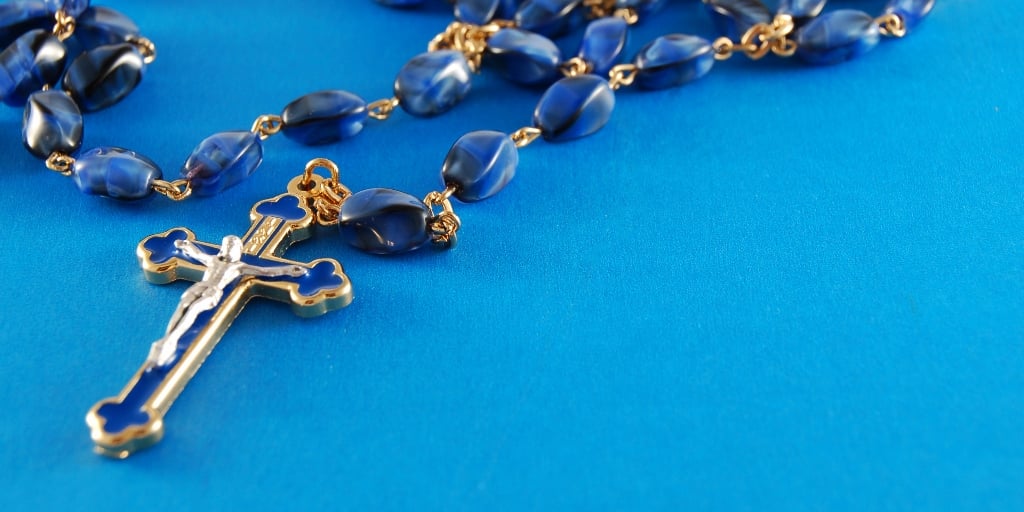 Apart from the Eucharist, there is no more popular prayer in all the world than the Rosary. Fr. Willy Raymond, C.S.C., explores its history.

People of all ages and ethnicities dangle them from the rearview mirrors of cars and trucks. Hollywood celebrities wear them around their necks as fashion statements. Millions of Catholics have been laid to rest devoutly clasping Rosary beads as they wait below ground for the call to Risen Glory. Nuns and even some monks and brothers wear a “supersized” set of Rosary beads around the waist as part of a religious habit. Patients in hospitals around the world finger the beads during anxious night hours, hoping for health or preparing for the end of life on earth.

The Pope in Rome prays the Rosary; the elderly pray it; families with little children, teens, forty-something parents and grandparents pray it; pilgrims going to Aparecida, Compostela, Lourdes, Fatima, and Guadalupe pray it; travelers in cars, trains, planes and ships pray it; joggers, marathoners, soldiers in combat pray it; peasants, priests, kings and queens, prime ministers and presidents pray it; people from every walk of life and ethnic background pray the Rosary. Most are Catholic, but some are Protestant or Evangelical Christians. 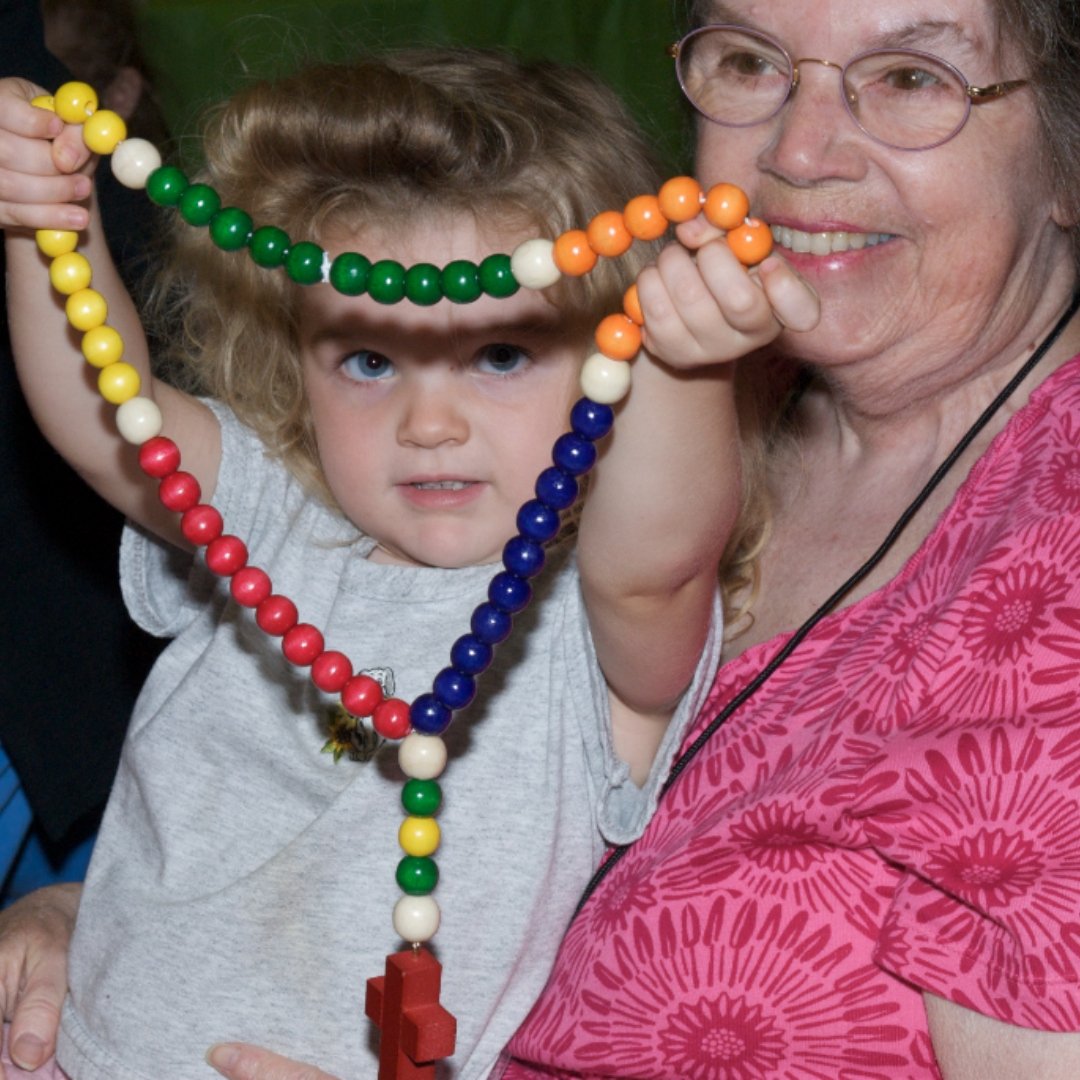 Apart from the Eucharist, there is no more popular prayer in all the world than the Rosary. Where does it come from and why does it endure in popularity across so many borders, cultures, and epochs? The history of the Rosary is replete with facts, truths, legends, myths and genuine piety. For more than 600 years, the Rosary has been a hallmark of Catholic devotional life and has been and is a most engaging form of prayer for countless millions.

The roots of the Rosary go back to two distinct sources: the first is 3000 years old and is found in the psalms attributed to King David in the Hebrew Scriptures of the Old Testament; the second is the practice of keeping track of prayers by counting with beads, pebbles, or marks on wood or stone. This practice, found in the great religions of the world such as Hinduism, Buddhism, Taoism, and Islam, is very ancient as well.

The psalms number 150 and come from the early Hebrew writings around the time of Kings David and Solomon. The psalms were prayed by the Jews at the time of Jesus, and He prayed them and quoted from them even on the cross as he was dying: “My God, My God, why have you abandoned Me?” (Psalm 22).

Early Christian monks who had fled to the desert to escape the distractions of the world and to seek God and pursue holiness prayed the psalms in sets of 50. They imagined that they were praying the psalms in the company of King David and the prophets and holy men and women of old and also in the company of Jesus. They soon were praying the psalms together in community and used scrolls of papyrus or lambskin to read from. Many of the monks could not read or understand Latin, the language of the Bible in the early Middle Ages.

Most of the people outside the monasteries did not have scrolls or books and likewise never learned to read and write. However, illiterate monks working in the fields and many devout laypeople wished to share in the prayer life of the literate Monks and of the Church. Since they did not know Latin and could not memorize all 150 psalms, they gradually began substituting the Paternosters (Our Fathers) for the psalms. They needed a way to keep track of how many they prayed, so they grouped the prayers into sets of 50, as the psalms were in the Psalter. They still needed a way to keep count, so they collected small pebbles or other items, which eventually become beads, similar to those used in other religions to count prayers and acts of devotion. 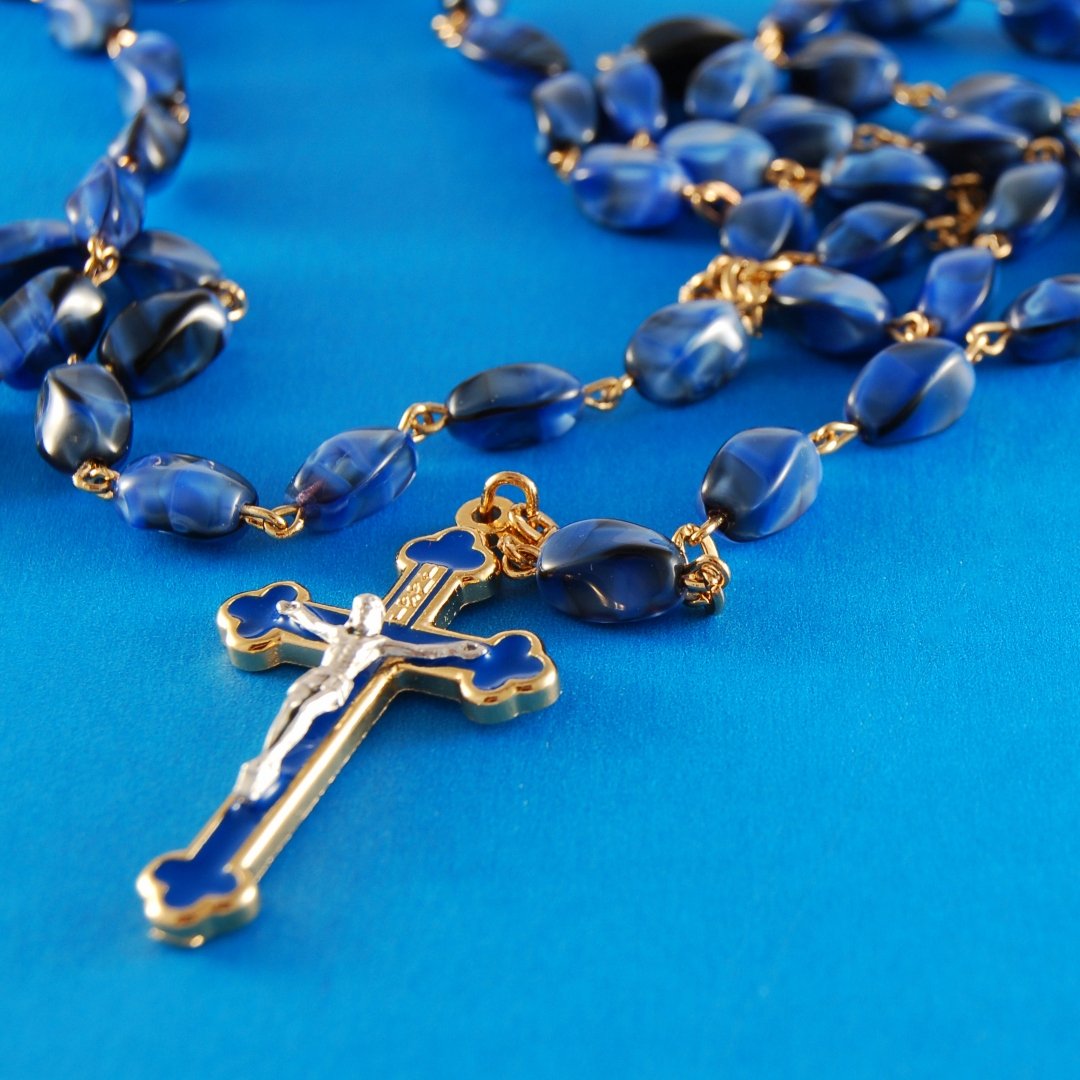 There is a charming tale of a hermit named Paul of Egypt in the mid-300s who would fill his garment with up to 300 small stones and cast one away for each prayer he offered. The more he prayed, the lighter he became. This story is very likely apocryphal. Here we see the merger of the two sources for the Rosary: the Hebrew Psalms of David and counting beads from the pre-Christian era.

Another apocryphal story, believed to be true as late as the 19th and 20th centuries, is the account of apparitions of Our Lady to Saint Dominic in 1208 to hand over to him the Rosary as we know it today. According to this rendition, Our Lady encouraged Dominic and the Dominicans to spread devotion to her and her Son through the Rosary with assurance that many graces would benefit all who prayed the Rosary.

According to Father Richard Gribble, C.S.C., however, it is not until the 15th century that the Rosary begins to take the shape we know it today. During this period the mysteries and the individual prayers began to coalesce. The “Our Father” came directly from the Gospel of Matthew, chapter 6. Much of the “Hail Mary” also came from Scripture, a joining of two greetings: first of the Archangel Gabriel in the Annunciation and second of Mary's cousin Elizabeth in the Visitation from Luke’s Gospel. The “Holy Mary, Mother of God, pray for us sinners now and at the hour of our death. Amen” is from a popular prayer of the faithful at the time.

The Apostles’ Creed, which follows the Sign of the Cross immediately, is ancient. An early mention of the expression "Apostles' Creed" occurs in a letter of Saint Ambrose in AD 390 from a synod in Milan. The Apostles’ Creed may have been associated with the belief, widely accepted in the fourth century, that, under the inspiration of the Holy Spirit, each of the Twelve Apostles contributed an article to the twelve articles of the Creed. Although not in its present form until 341 AD, the Apostles’ Creed faithfully embodies the teachings the Apostles brought to Rome and the rest of the known world.

The Salve Regina (Hail, Holy Queen) is from the 11th century and is frequently prayed at the conclusion of the Rosary recitation. Although these prayers were in vogue for 300 years, they were not all arranged in the final form that we know until the Council of Trent, 1545-1563. 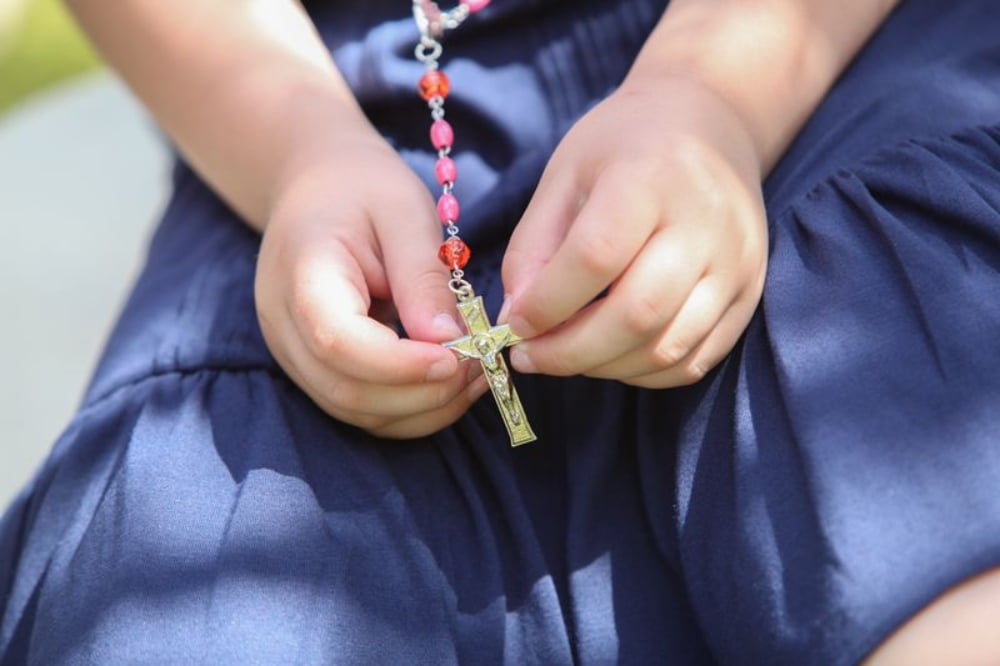 The name of this prayer has a true and interesting derivation. Mary was associated in the Middle Ages with roses and rose gardens. The rose came to symbolize Mary. Hence the name Rosary. In 1470 the Church recognized the Confraternity of the Holy Rosary. Official Church recognition was granted by the Pope in 1571.

In that same year, Pope Saint Pius V asked all Christians to pray the Rosary for the help of Christians defending Christian Europe from Muslim invasion at the great sea Battle of Lepanto. On October 7, the smaller Christian armada won a stunning and unexpected triumph. That day has been celebrated ever since as the Feast of the Holy Rosary.

In 1597, Pope Sixtus V inserted the word “Jesus” into the Hail Mary to give that prayer its final form. In the seventeenth century Saint Louis de Montfort and “The Wonderful Secret of the Rosary” represented a major advance in popularizing the Rosary. Pope Leo XIII (1878-1903) wrote twelve encyclicals and five apostolic letters on the Rosary. He was a most avid supporter of the power of the Rosary. He saw the Mysteries of the Rosary centered on the life of Jesus Christ more than on Mary. Venerable Pius XII (1939-1958), Saint John XXIII (1958-1963), Saint Paul VI (1963-1978), Saint John Paul II (1978-2005), all taught the Rosary and commended it to the faithful in official encyclicals or apostolic exhortations. 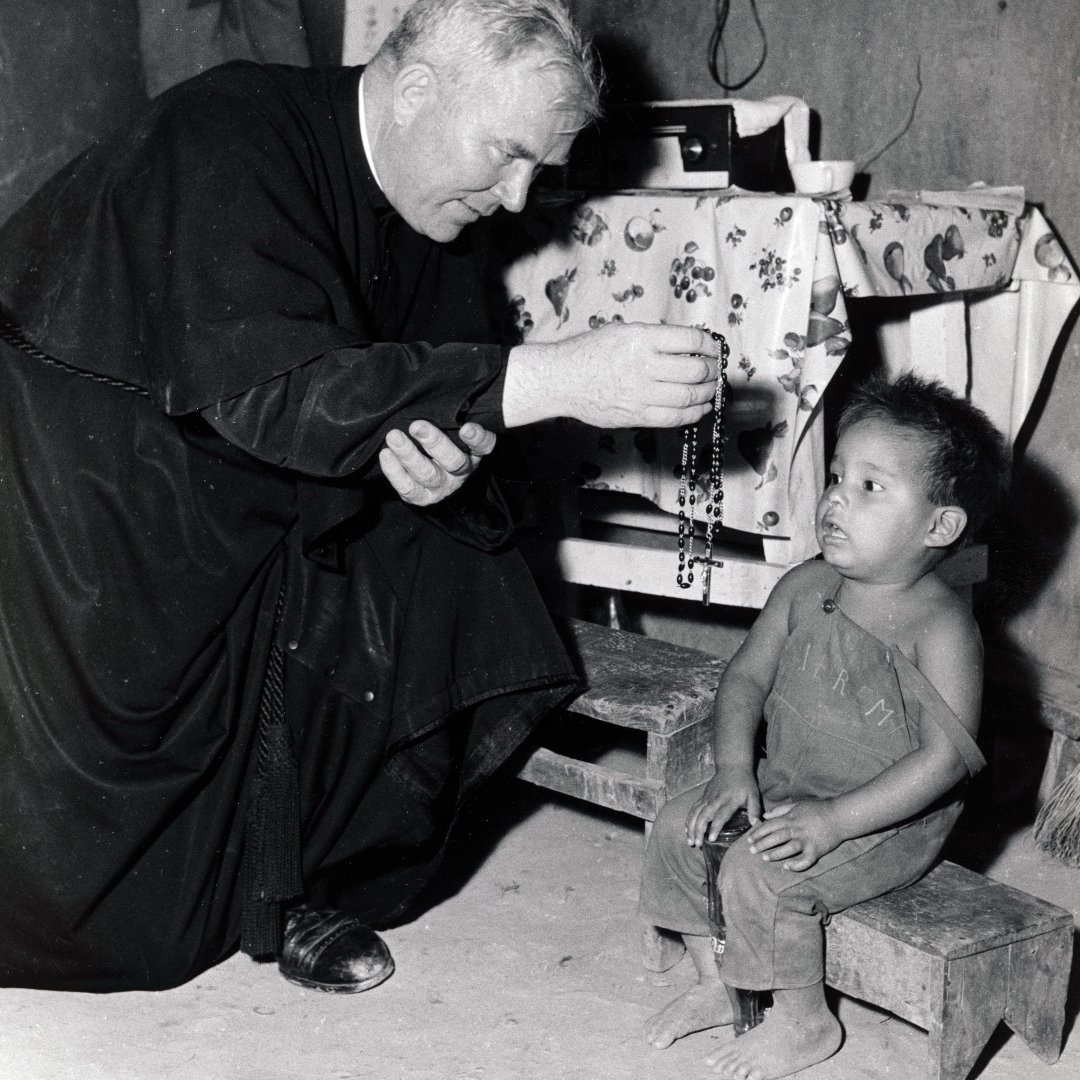 Venerable Patrick Peyton, C.S.C., exhorted the Council Fathers at Vatican II to include family prayer for the “Domestic Church” in the Constitution on the Church (Lumen Gentium) and family spirituality in the Church in the Modern World (Gaudium et Spes). His lapidary exclamation, “The Family That Prays Together Stays Together,” has become among the most popular mottoes in the world.

Venerable Fulton Sheen and Saint Teresa of Kolkota (Mother Teresa) both used the phrase often and many people wrongly attributed the phrase to each of them. Archbishop Sheen, commenting on criticism of the Rosary as vain repetition, asked a question: “Do you ever tire of hearing someone you love say ‘I love you'?”

Saint John Paul II said clearly many times that the Rosary was his favorite prayer. He championed the Rosary as the School of Mary and in 2002 began his Apostolic Letter On the Most Holy Rosary of the Blessed Virgin Mary by calling this prayer “simple yet profound.” With that letter he called for a Year of the Rosary and introduced the first substantial addition to the Rosary in 430 years. He added five Luminous Mysteries, focusing on the public ministry of Jesus. These mysteries are now accepted as one more, albeit major, evolution in the long history of the Rosary. 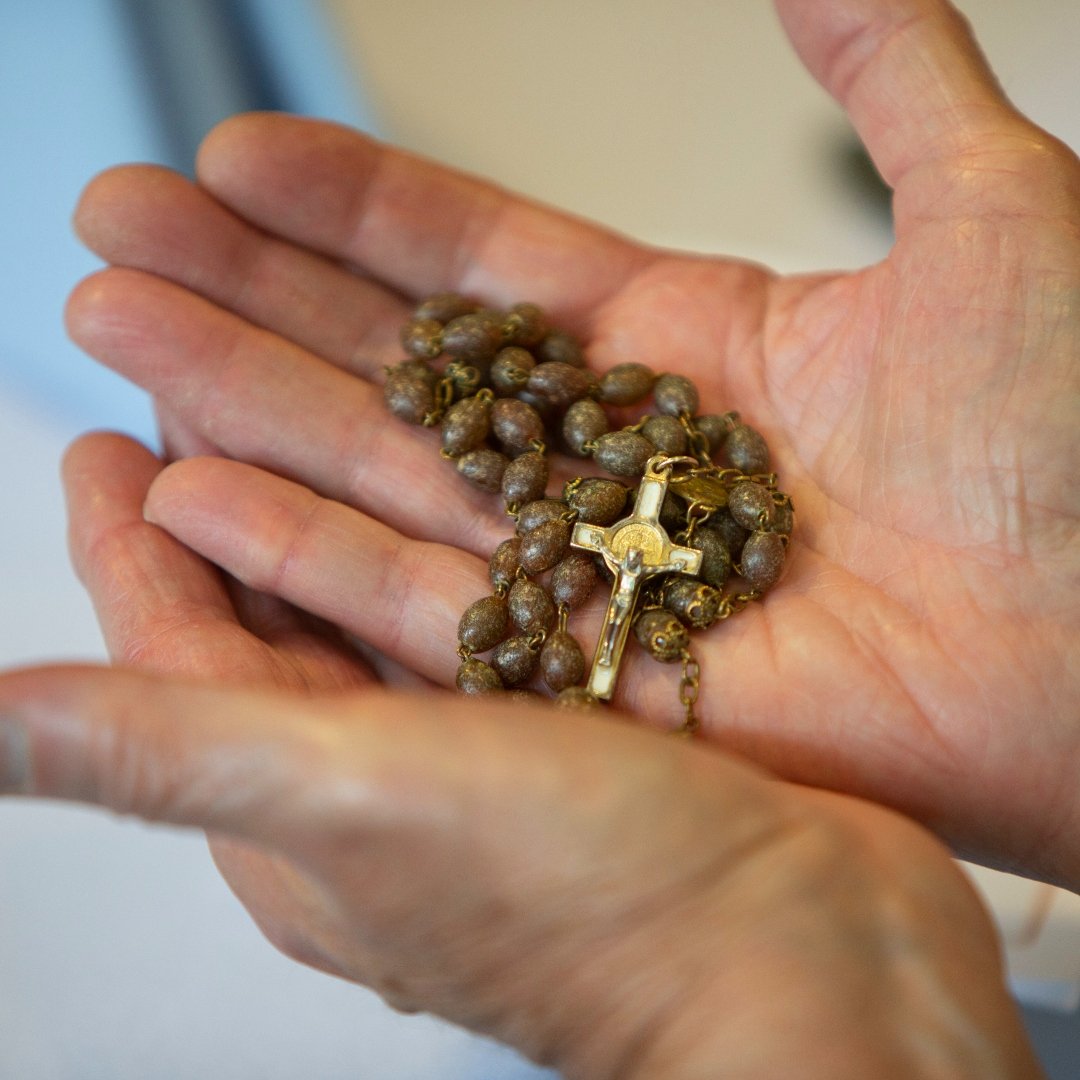 As Pope, Saint John Paul II invited Christians who had never prayed the Rosary to consider taking it up and invited those who had set it aside to rediscover it. In doing so he reminded everyone that the Rosary possesses a number of powerful spiritual benefits:

The Holy Father Emeritus, Pope Benedict XVI, prays the Rosary every day on his afternoon golf cart rides to the Grotto in the Vatican Gardens. Pope Francis always prays the Rosary and visits the image of Mary, Protector of the Citizens of Rome, in the Basilica of Saint Mary Major in Rome before traveling abroad and upon his return. 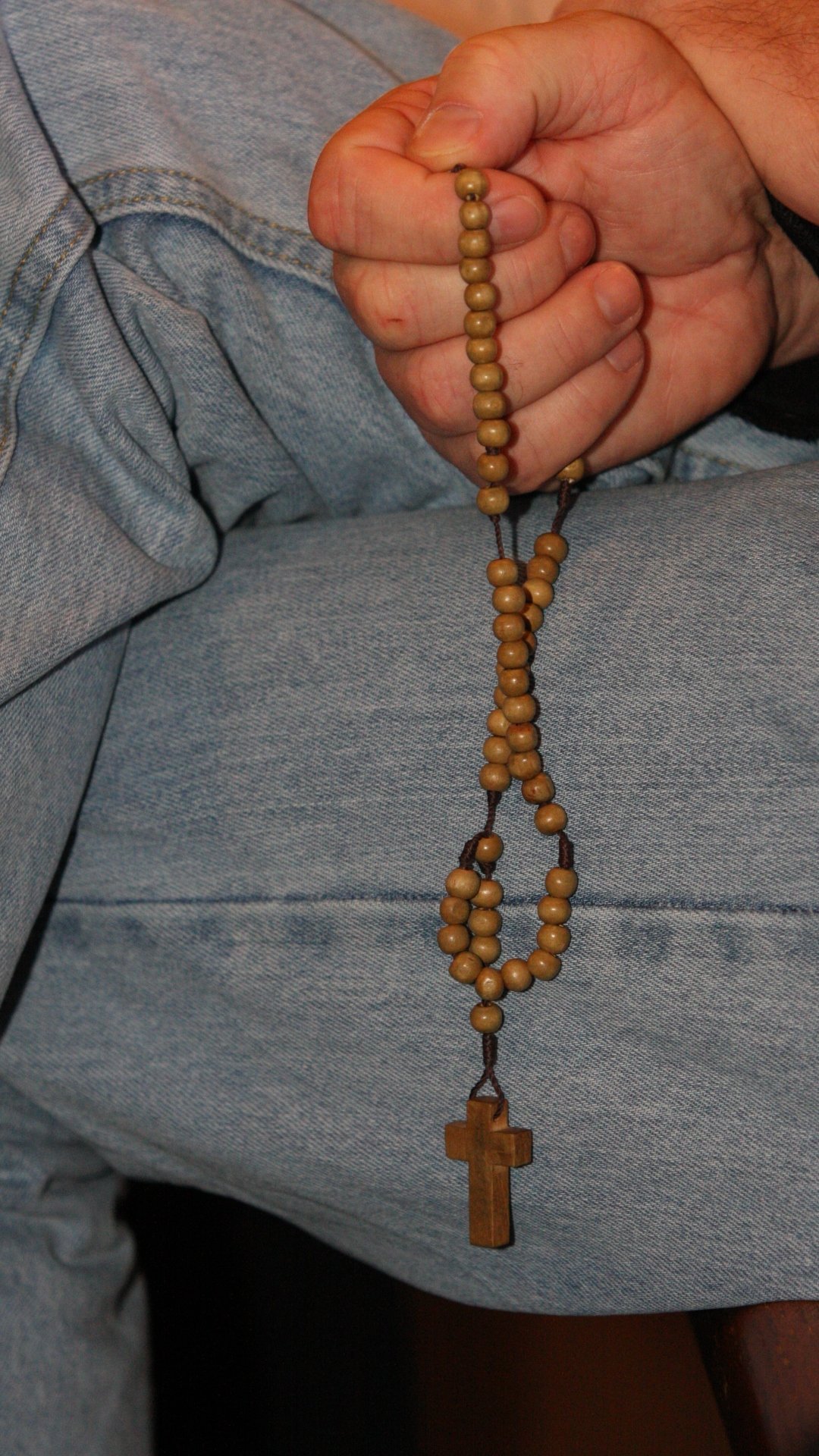 As the third millennium of Christianity marches onward, we see the Rosary once again morphing into a “simple yet profound” way for people of all ages to walk through the stunning, moving and inspiring events in the life of Christ, guided by the pure love and sure confidence of Mary, the Mother of the Redeemer, and our mother.

“To pray the Rosary is to linger in the domain of Mary,” Servant of God Romano Guardini noted. “There you will experience the truth, beauty and goodness of the Divine Son, whose memory comes to life and becomes a treasure trove of graces.” No wonder the Gospel says, “Mary treasured all these things in her heart.”

Pray the Rosary daily! You will discover that Mary is alive! You will also experience a change in your life that is rich in grace and mercy.

The Rosary has the character of a sojourn. Its essence is the sheltering security of a quiet, holy world that envelops the person who is praying. The Rosary is not a road, but a place, and it has no goal but a depth. To linger in it has great compensations. (Romano Guardini) 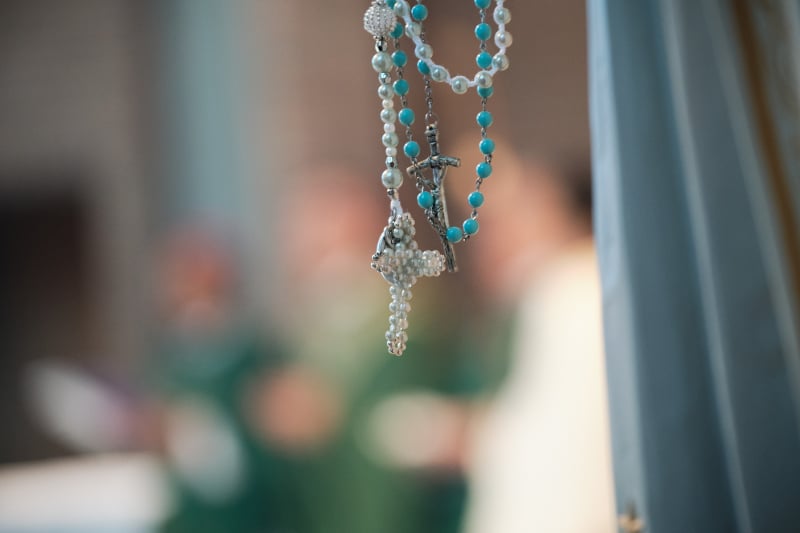 Each weekday, the homily from Daily Mass at Holy Cross Family Ministries is shared online. Visit Family Rosary: World at Prayer and sign up to receive notifications of each day's homily.

Father Wilfred J. Raymond, C.S.C. (Father Willy), a native of Old Town, Maine, is the eighth of 12 children. He joined the Congregation of Holy Cross in 1964 and was ordained to the priesthood in 1971. He earned a bachelor’s degree in philosophy from Stonehill College in 1967 and a master’s in Theology from the University of Notre Dame in 1971. He served in ministry at Stonehill College (1979-1992), Holy Cross leadership (1994-2000), National Director of Family Theater Productions, Hollywood (2000-2014), and President of Holy Cross Family Ministries (2014-2022). In addition to English, he is conversant in French and Spanish. He remains a diehard fan of the Boston Red Sox, even though he has served as Chaplain for the Los Angeles Dodgers.

Consider Adoration for Families this Lent
Read
Death in the Catholic Experience
Read
Can I Have One Too?
Read