Clouds: Knowing How to Die so as to Know How to Live

Sr. Nancy Usselmann, FSP, shares her impressions on a movie about death and dying from a truly Catholic perspective.

There are only a few stories that reach down deep in my soul and prompt me to reflect on the purpose and meaning of life…and death…with grace and simplicity. Such is the story of Zach Sobiech, a singer/songwriter teenager diagnosed with terminal cancer. In Clouds, a film by Justin Baldoni (Five Feet Apart), Andrew Lazar (American Sniper) and Casey La Scala (A Walk to Remember), Zach’s story is displayed in all its wondrous beauty.

There are other stories of young people dealing with death and dying, but this one is truly Catholic in its form, story, symbolism, and ultimate message. It expresses the beauty and gift that is our life from natural birth to natural death and that grace is present to guide us along bringing joy and hope in a world that often despairs in the face of death. This film brings hope by showing how to live so as to know how to die. The director, Justin Baldoni, says of the film that, “All of us have the choice to wake up every day and choose hope, despite our obstacles and make the choice like Zach did to live, as we all shouldn’t have to wait to find out we are dying to start living.” 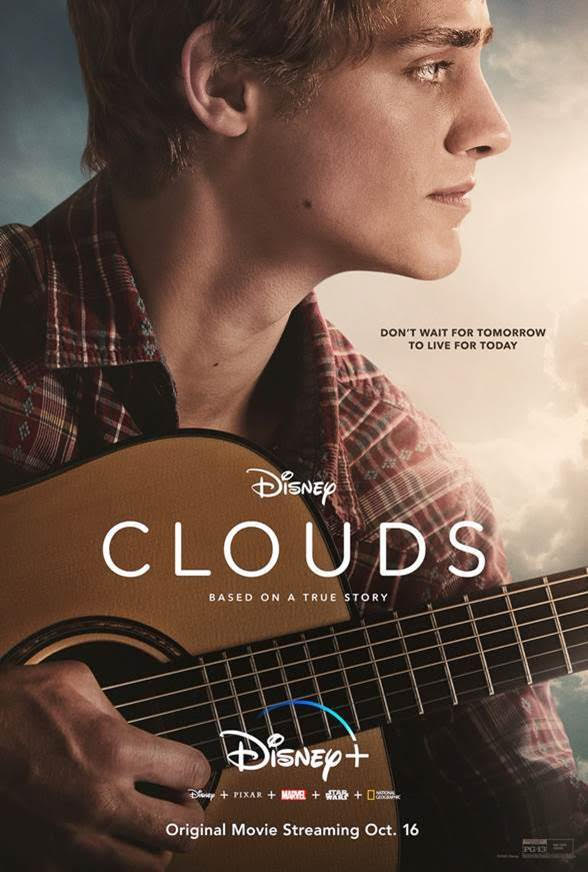 The film is based on Fly a Little Higher, the memoirs of Zach’s mother, Laura, a devout Catholic, who shares her beliefs that God showed the family the gift that is Zach along with the enduring music and legacy he left behind. She says, “Even in the context of faith, there is still the struggle. The big part of our story that I really love is that God used our story despite the struggle, despite the failures. We’re not perfect people. We struggled through this. And yet he chose to use our family as a vehicle for his grace and love. And the film beautifully shows that…. It makes it accessible…. God uses messy people for all sorts of wonderful things.”

The movie begins with Zach (Fin Argus), a typical 17-year-old who loves music and writes songs with his long-time friend, Samantha “Sammy” (Sabrina Carpenter), but who also lives with osteosarcoma, a rare form of bone cancer. We hear Zach’s voice over saying, “What some people take for granted, others are fighting for, and believe me I’m a fighter.” He has a crush on Amy (Madison Iseman) and wants to ask her on a date, but then he finds out that his cancer spread, and he is given only several months to live. Grieving his shortened life, he reflects on what his teacher, Mr. Weaver (Lil Rel Howery) once said by quoting the poet Mary Olivers, “What is it that you plan to do with your one wild and precious life?” Knowing that he will probably not go to college, his mother Laura (Neve Campbell) shares, “This is a chance for you to cut through the superficial stuff … and choose what this time is going to look like for you.” 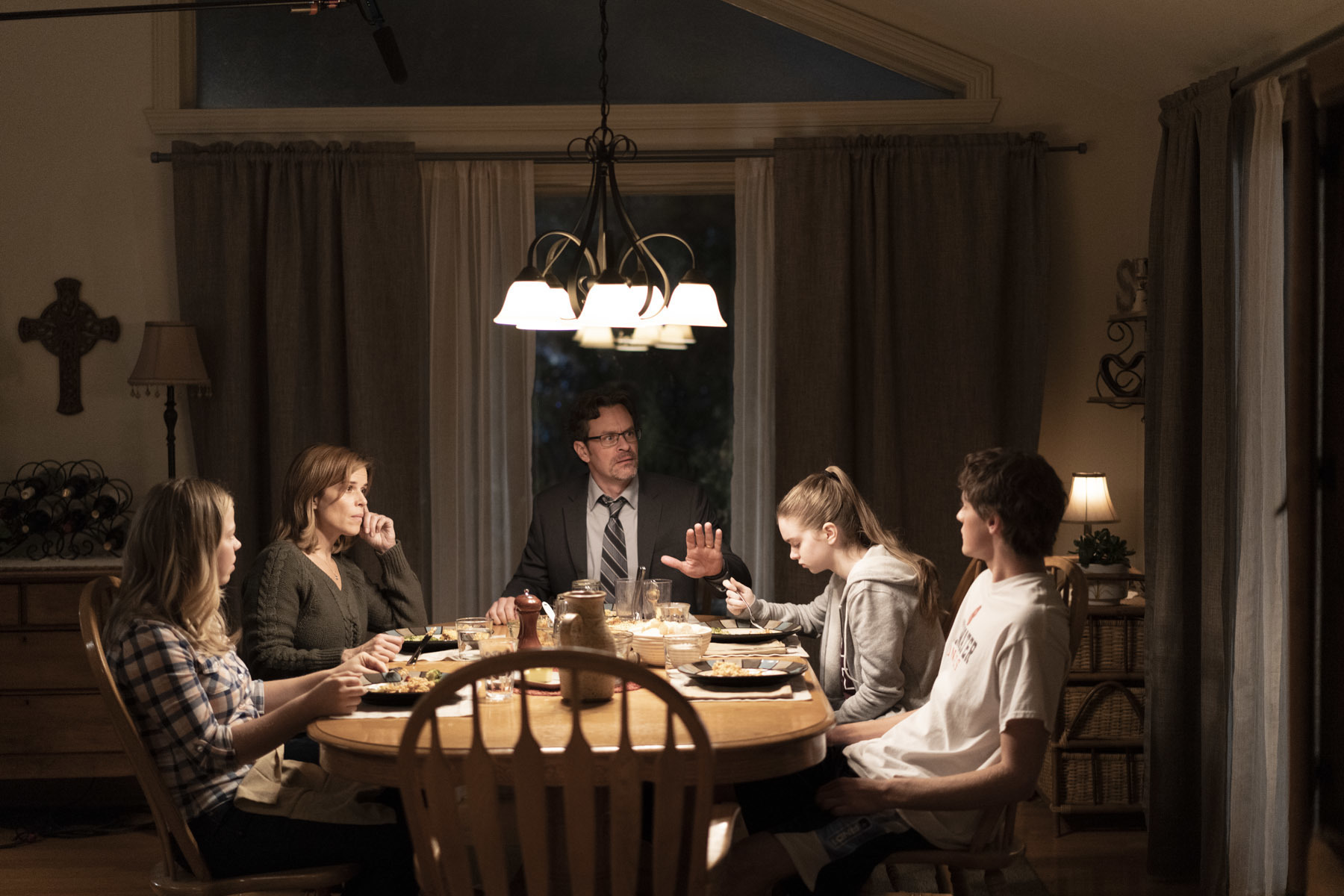 In the movie and in real life, Laura decides that the whole family needs to get away. She brings them on a trip to Lourdes, France, to the Shrine where Our Lady appeared to a young Saint Bernadette and where healing waters flow. Not knowing Zach’s story before watching the film, this part surprised me. It’s not every day that you see the Shrine in Lourdes featured prominently in a movie that’s not about that specifically. When I heard the Ave Maria sung as Zach and his mother separately entered the baths, I felt that something tremendous was about to happen, a turning point in Zach’s life, because that is how grace works. When we turn to God in faith, he always surprises us with grace to endure whatever comes. If you have been to Lourdes, you know that the baths are a spiritually cleansing experience and reflective of baptismal grace. Healing happens in all forms—physical, spiritual, and emotional. Everyone, it is said, does not leave Lourdes without some miracle—most are invisible to the eye. In an interview with Laura she relates that Zach’s miracle was that, “he found his voice.” 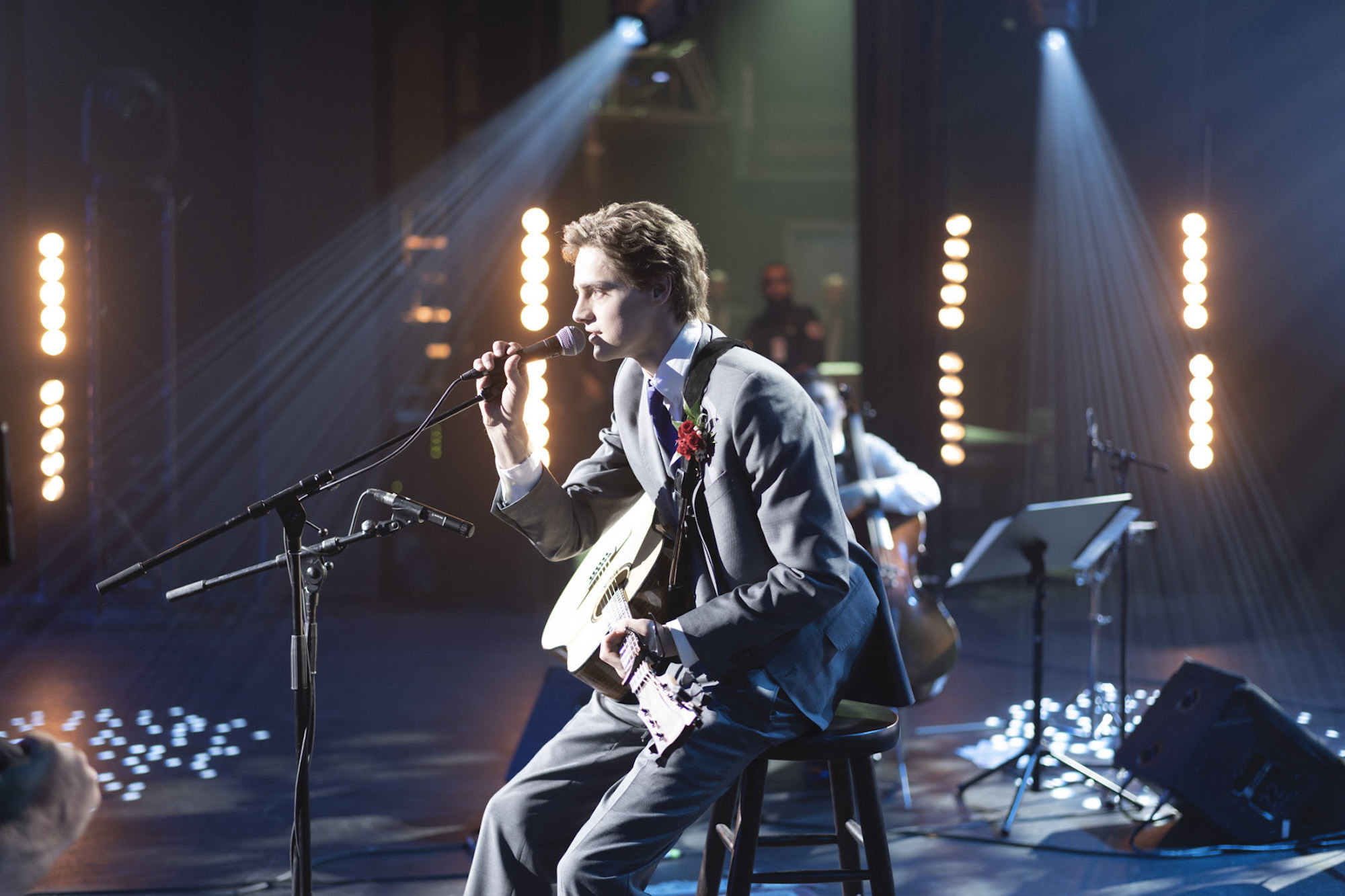 Zach goes home and writes the song, Clouds, and together with Sammy create a YouTube video of them singing his song. They follow their dreams and their dreams lead them on an amazing journey to a professional music recording. Immediately upon Zach’s death, Clouds hits number one on the iTunes charts. Most of the music in the film are their original compositions. Music became Zach’s voice to share what he was feeling and experiencing as he prepares to die. He fell in love with Amy and their relationship became the angst and the balm for his last months of life. He didn’t stop living, but instead poured his life out for others to make them happy, to bring them joy. The ending voice over is Zach saying, “Life is short. It is up to you to make it sweet.” And sweet he did. His life continues to touch the lives of so many people around the globe through the music he left behind as his legacy of how to live well so as to die well — a profoundly spiritual lesson through a beautiful teenager’s life.

Baldoni shares, “I hope young people understand that their lives are going to be hard….everything is being designed to make things easier in this ‘on demand’ culture and mentality…faith, religion, and spirituality have been demonized for dogma and there’s this very, I, I, I mentality.” He continues, “Life is going to be challenging but it doesn’t have to be depressing. It’s what you make of those challenges. I hope people stop ‘otherizing’ those who have illnesses like Zach had. It can happen to anybody…. And, I hope people talk about mortality so that it informs the way we live.” No one can walk away from the film 'Clouds' without being changed in some way. #catholicmom

No one can walk away from the film Clouds without being changed in some way. When a teenage boy becomes the catalyst for people to reflect on the gift and meaning of their life, then you know there is something truly special about this story. Zach’s last words will stay with me: “I just want to make people happy.” When it all comes down to it, what is this world all about anyway? If we live so as to bring a little more light, joy, and hope to the world, that can have more of an impact than money, fame or recognition. Zach is a social influencer. Not in the way of the social media czars, but of the way of the saints, the holy ones who show us what is really important in life.

I strongly encourage every young person and parent to watch this film together. See it streaming on Disney+. It can change your life!

Knowing
Read
They Do Not Know
Read
How Well Do You Know Your Bible?
Read