Hero from the Dust Bowl 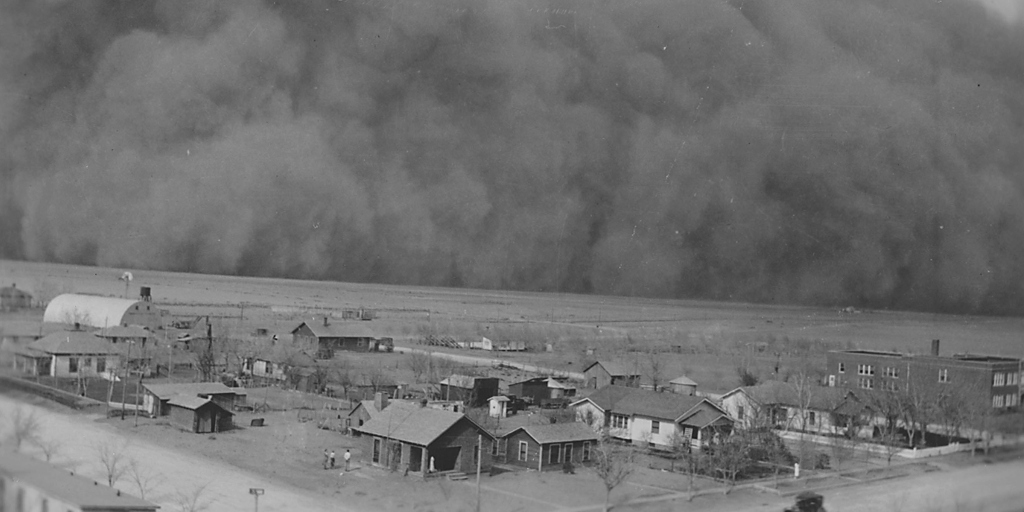 Patti Maguire Armstrong shares the story of a man who could have looked the other way, but instead chose to change others' lives for the better.

A favorite story of mine, one that I wish would be made into a movie, comes out of the Dust Bowl. During our homeschooling years, we met a lady in a nursing home we used to visit, who lived through the Dust Bowl — something I knew very little about. It inspired us to study it. We came across a remarkable story of heroism from a man who could have looked the other way but instead, changed lives in a remarkable way. I think you will like this story as much as I do.

In Children of the Dust Bowl: The True Story of the School at Weedpatch Camp, Jerry Stanley wrote about the Oklahoma Panhandle; a stretch of rocky, red soil tucked between Texas, Kansas, and New Mexico. In 1931, while our country was only beginning the decade-long Great Depression, it stopped raining on the Plains.

The unrelenting wind turned the dry overplanted soil into huge dust clouds. People watched as dust storms darkened the skies and overtook the land. Windows and doors were plugged with tape and wet towels, but still the dust infiltrated homes and lungs to the extent that many died from dust pneumonia. People stranded outside when a storm hit often suffocated. 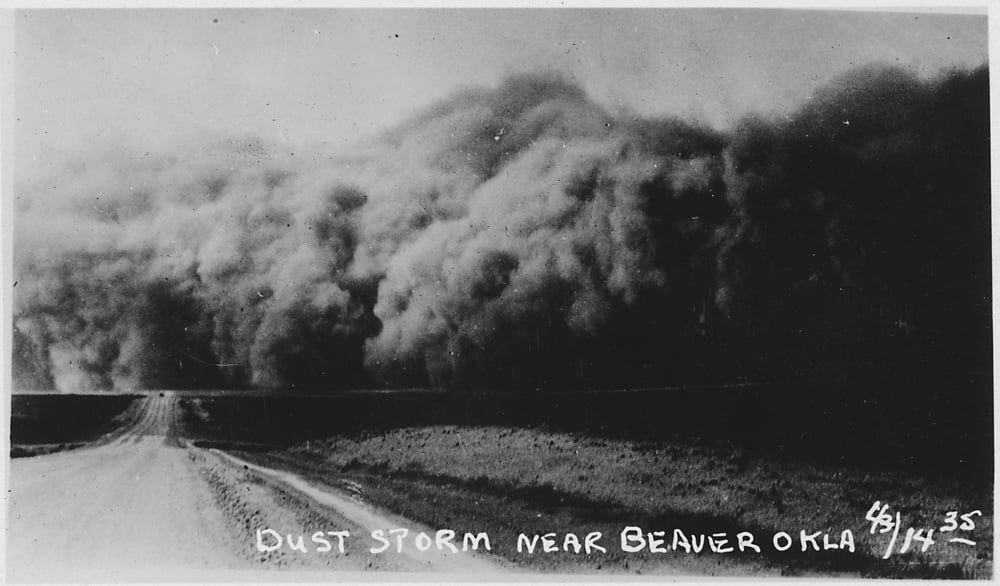 By 1932, one thousand families a week lost their farms to the banks in Texas, Oklahoma, and Arkansas. By 1936, the Panhandle had not more than a few sprinklings of rain for five years straight. Day after day, the cruel wind blew, burying entire buildings under deep drifts of dust.

The dust storms spread throughout the Great Plains, but the Oklahoma Panhandle was the epicenter. Many did not survive, but those that did began to realize that their best chance for survival was to get out.

California became the Promised Land to the “Okies.”  Blue skies, fertile soil and work were the promise so many loaded up their cars and jalopies for the long drive west. Handbills from growers needing help with harvesting, enticed thousands. Those who made it across four states and nearly two thousand miles through the Tehachapi Mountains of California emerged through the San Joaquin Valley.

As explained in Children of the Dust Bowl:

All of their troubles suddenly seemed to disappear for now they could see with their own eyes what they had only dreamed about for months, sometimes years. From two thousand feet above sea level, they saw a vast stretch of orchards, endless fields of grapes, cotton, and tomatoes, and as far as the eye could see in any direction, green – so much green it was hard to believe after life in the Panhandles.

“It was paradise,” Trice Masters recalled. “When we saw the valley, we started hollerin’ and yellin’ ‘cause we knew it was Californ.  We started singing’ and we didn’t care. If we ran out of gas, we’d make it ‘cause we could coast down.”

But the Promised Land had overextended its promises. There was such a surplus of labor that growers could underpay the desperate field hands. With no money and no work, Okies slept wherever they could in the open. In the midst of the fertile land of California, many of them starved to death. John Steinbeck was a journalist who visited the area at that time and wrote The Grapes of Wrath to tell the story of what the Okies were living through … and dying from. Filth, starvation, and disease, including dysentery and malnutrition, took the lives of so many who had made it so far.

In 1936, the Farm Security Administration began to build twelve camps in the San Joaquin Valley to provide emergency housing in tents and cardboard shacks.  It provided little relief while the Okies vied for work to keep them alive. The public school system began “accepting” the Okie children, but that is far too gracious a word for what they did.

Without proper sanitation, adequate food or decent clothing, the Okies made a horrible impression. Add in their funny accents and educational deprivation, and some teachers deemed the children uneducable. Adults and children alike were shouted at:  “Okies go home!”  Store windows had signs stating:  “No Okies Allowed!”

Enter Leo Hart. At first, he seemed only to be a friendly man who came to the Weedpatch Camp to get to know the children. “He knew what we were goin’ though,” Joyce Foster recalled. “He knew they called us maggots and scum. He understood and he cared.”

In 1938, Leo was head counselor in the Kern County High school district. “Every day,” he recalled, “I talked to a dozen children who were crying because someone had called them a dumb Okie.” In 1939, he kept his compassion towards the Okies to himself while he ran for Kern Country superintendent of education. He was elected. Hostility towards the Okies was at a fever pitch. There had even been a mob headed by the sheriff that burned down another Okie migrant camp. People fueled by hatred and prejudice wanted to drive them out of California. But they had nowhere else to go.

Leo presented the school board with a plan to remove the Okie children from the public schools by establishing an emergency school to relieve overcrowding. The board loved the idea of getting the hated Okies out of their schools but did not want to spend a dime on them. Leo promised to accomplish the Weedpatch School at no expense to the district.

In May of 1949, he leased a 10-acre site of land from the federal government for ten dollars. It was the field next to the camp. The school began with two condemned buildings that had been in the field for years and with 50 poorly clad, undernourished students. Leo began visiting universities and seeking out teachers with a passion for teaching.   He warned them all that they would begin teaching at the most basic levels.

Then, Leo solicited donations for everything from lumber, building supplies, and tools, to farm animals, books, typewriters, and clothing. Teachers might teach history and math in the morning, and then teach construction “hands on” while the kids helped build their own school. Some teachers taught part of the day and then helped in the cafeteria. A teacher who taught chemistry, typing, and stenography also showed the girls how to make their own face cream and soaps and taught hygiene.

Leo became a beggar of everything so that taxpayers could not complain about the Okie school. Donations began to pour in as dedicated, caring people caught the spirit. As the school evolved, lunches were made with food raised and grown at the school. Families took part in helping in the fields so that they too could be fed. Kids learned basic subjects, but they were also trained in construction, agriculture, butchering, office tasks, and a myriad of other skills.

One of the more unusual items used at the school was a C-46 aircraft bought for $200 from military surplus. Not only did the kids learn airplane mechanics on it, but anyone getting 90% or better in arithmetic, earned the privilege of driving it up and down a makeshift runway. The kids began to excel in math. Likewise, Leo directed students in the building of California’s first public swimming pool complete with a diving board and used it as incentive for good schoolwork.

Click to tweet:
We don’t know the whys behind every disaster, but we are all given moments in which we can become survivors and heroes. #catholicmom 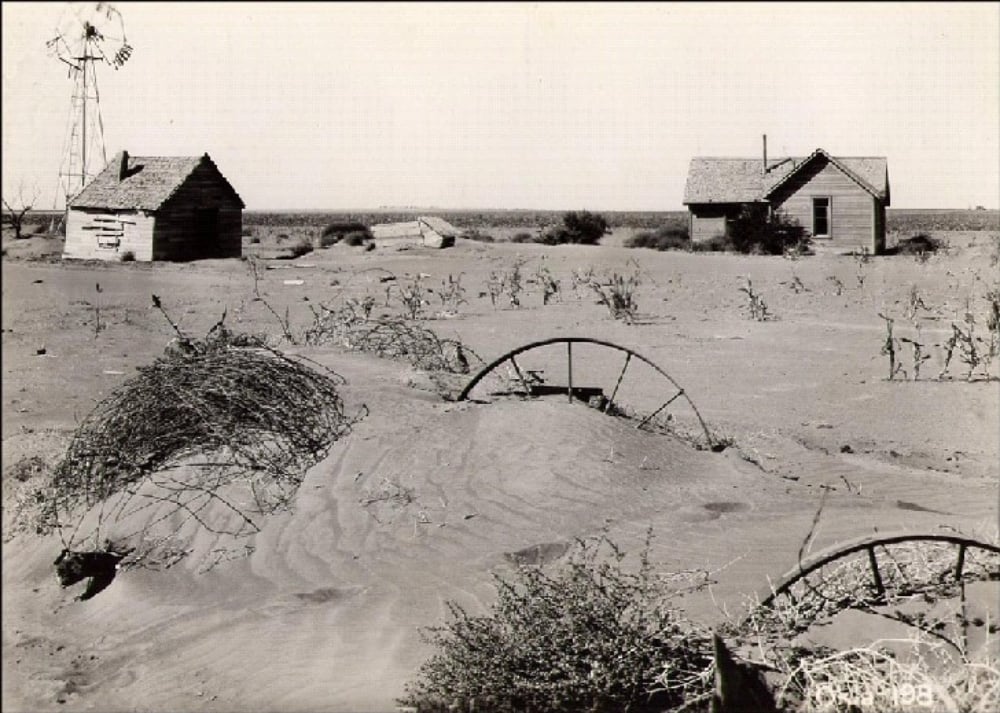 Sadly, there were still occasional attacks of hatred, such as arson and dead animals dumped at the school, but the evolution of the Okies at Weedpatch School bordered on the miraculous. Gradually, word spread that some of the best teachers in the country, the best chemistry equipment, and the best course in auto mechanics were at the Okie school. Breakfast was sold for one cent and lunch for two cents with all the ingredients prepared, grown, and raised at the school. The school especially became known for its total lack of disciplinary problems.

By 1944, the previously hostile community of Kern Country clamored to get admitted into the Okie school. In that same year, a legal ruling stated that an emergency school could not last more than five years. It was absorbed by the nearby school district and renamed Sunset School. Non-migrant students enrolled by the hundreds, suddenly outnumbering the Okie children.

Leo Hart and Weedpatch School is just one man and one story. We don’t know the whys behind every disaster, but we are all given moments in which we can become survivors and heroes. Maybe not always on a grand scale, but using Leo as an example, we should never underestimate the power of one.