Have you ever been an instrument by which God’s grace has been given? Anna Maria De Guid shares a story of forgiveness.

Whether we realize it or not, we have all been recipients of God’s many graces. They might have come in the form of coincidences, lucky breaks, a streak of genius, or whatever other name people give it.

But have you ever been an instrument by which God’s grace has been given? Here’s a wonderful instance of how God’s ways could be truly beautiful and mysterious.

Maikiki was the third of five children. Her older siblings often stayed at her maternal grandmother’s home while her younger siblings played with her cousins most of the time. So it happened that Maikki grew up being very close to her mom.

When her mother became very ill, she became her mom’s go-to child. Maikki promised herself that she will hold her mom’s hand if something serious happened to her mom. She thought that if her mom became incomprehensible, confused or comatose, at least her mom might still feel her warm comforting touch.

One afternoon, her mom had a heart attack while in the hospital for a follow-up visit. It was a blessing that all her siblings were there. The medical personnel rushed to her bed to start emergency procedures. Maikki stayed by her mom’s side and steadily held her mom’s arm. Out of the blue, her older brother abrasively pushed Maikki’s arm away. She was shocked at his action, and her entire being instantly filled with rage at her brother’s action.

“If Mom dies now, I will never speak to him again,” she told herself as she was seething with anger. As if her brother read her mind, he gently took her hand and put it back on their mom’s arm.

Her mom survived the ordeal but Maikki did not. She continued to be filled with anger and resentment towards her brother. For days she did not talk to him. “It’s a good thing Mom didn’t die,” she consoled herself. But still she could not put herself to speak with her brother again despite all the praying she was doing to be able to forgive.

A few days later at her mom’s house, she met the housekeeper who asked, “Ma’am, how is your mother doing?

“She’s doing much better now; thanks for asking.” Maikki asked, “Do you still have your mom?”

The housekeeper related her story: “She died ten years ago. I grew up being closest to my mom. She was often sick, and I told myself that I will hold her hand if something really bad happened to her. I wanted her to feel that someone was comforting her.”

She continued, “One day, Mom had a heart attack, and I held her hand at the hospital while the doctors were trying to resuscitate her. All of a sudden, my brother pushed my hand away. Within a few minutes, my mom died. I was livid with anger at my brother. I felt that he was jealous of me because I was closest to my mother. Since then, I had not spoken to him. Even my children said that I have a hard heart, and that I should already forgive. My brother has called me several times over the years to ask for forgiveness, but I would not take his calls.”

Maikki was in shock at what she was hearing. She felt like the housekeeper was telling her HER story. All the feelings she had experienced were being validated. It was justified and understandable how she felt. It took her more than a few minutes to gain composure.

“Ten years is a long time,” she finally said. “Something could happen to your brother and you might regret your actions. I think you should call him and reconcile. After all, he has been wanting to apologize.”

The housekeeper was quiet for some time. “You are right,” she finally replied. That weekend the housekeeper went to see her brother, and that was the first time their families got together after a decade of separation.

CLICK TO TWEET:
Have you ever been an instrument by which God’s grace has been given? #catholicmom

As for Maikki, she took her own advice.

As for me, I am still wondering up to this time who the real instrument was.

Come, let us sing joyfully to the Lord; cry out to the rock of our salvation. Let us come before him with a song of praise, joyfully sing out our psalms. (Psalm 95:1-2) 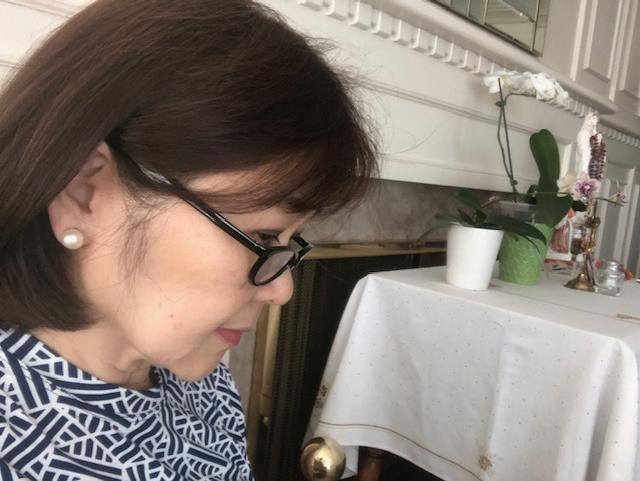 Anna Maria is a Catholic wife and mom of 3 young adults. For decades, she nourished tummies with her cooking and baking. Now, she nourishes souls! She has minute reflections in TouchedByGrace.today blogs and stories in her Touched by Grace books. Her mission is to evangelize through sharing stories of God’s graces in our everyday lives.

A Crowbar and My Hardened Heart: Kate Wicker's "Seeing Your Body as an Instrument of God"
Read
Love, Forgiveness and God's Way
Read
The Rosary – An Instrument of Peace by Jennifer Gladen
Read