Colleen Spiro considers the similarities between good friends and Jesus, the Good Shepherd.

"What man among you having a hundred sheep and losing one of them would not leave the ninety-nine in the desert and go after the lost one until he finds it?" (Matthew 15:4)

I met my best friend, Bonnie, on the first day of school. We were in the first grade. I sat behind her and I remember being amazed by her beautiful long strawberry blond hair.

We were both pretty shy, so it took some time before we started talking to each other. Once we did, we became inseparable.

We played with dolls and baked cookies. We went sliding down the hill behind her house in the winter and went swimming in local lakes in the summer. We rode our bikes everywhere. We loved reading books and listening to the Beatles. (Yes, I’m old).

When I was 13, my family moved to a new town. Bonnie and I were both devastated. Would we ever be able to see each other again? Would we lose touch?

We saw each other just once while we were in high school. We both planned on going to nursing school, but different schools. And our biggest fear that we would lose touch came true.

After I had worked as a nurse for a few years, my sister and I decided to move to Florida together. We were tired of the snow and cold of New England. The day we walked out of our apartment and found my car buried in the snow was the day we made our decision.

I was only going to live in Florida a year, but I met my husband there and never left. We got married and had two sons. I worked as a nurse for a while and then I quit and worked with my husband in his printing shop. One day, while working with him, I got a phone call. It was from a man who said he was Bonnie’s husband. She was looking for me, and was I the Colleen who had lived in New England many years ago?

You could have knocked me over with a feather.

No one had ever looked for me like that. I felt so loved. So special. So blessed.

We began to call and write each other regularly. When email came about, we were so excited! We could stay in touch daily and have lengthy conversations about everything. It was as if we had never been separated.

We are still in touch. Just about every day. We have now been friends for 60 years!

I am so grateful to God for this gift of such a special friendship. Lost and found. Like the parable of the lost sheep.

I was not only “found” by Bonnie, but I was found by Jesus, too. I eventually converted to Catholicism several years after marrying my husband. One day Jesus called me.

You could have knocked me over with a feather.

How does it feel to know that Jesus loves us like that? He is our Good Shepherd. And when we get lost, He turns over every rock to get us back.

Lord, thank You for the gift of friends and life and love. Thank you for finding me and loving me with your forever kind of love.

Have you ever had someone miss you so much that they turn over every rock to find you? How does it feel to know that Jesus loves us like that? #catholicmom 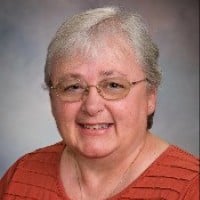 Colleen Spiro is a Catholic mother, grandmother and a deacon’s wife. A certified spiritual director, Colleen loves to share her faith and encourage others through her retreats and writings. You can read her reflections at her website, Catholic Prayer Life and read or listen to her podcast at Finding God in the Everyday.