Inspired by the message of Our Lady of Guadalupe, De Yarrison and her sister reflect upon domestic abuse.

“My beautiful Roses, sitting in My holy water, I am feeding you from the roots up so you will be beautiful at My coming. In this vase, you gather strength from one another and you support one another and that is what makes this bouquet beautiful."

These are words I sensed our Lord speaking in my heart during a recent prayer gathering. My sister Laura, a survivor of domestic abuse, and I have been reflecting on the idea of God’s daughters as living roses, requiring His tender care to bloom into beautiful fragrant flowers. Here in October, which is domestic violence awareness month as well as the month of the Rosary, I’d like to share our reflections with you.

On the hill of Tepeyac in December 1531, Spanish roses bloomed in the Mexican desert. St. Juan Diego gathered these roses into his tilma as instructed by the Blessed Virgin Mary. She then tenderly arranged them, folded the Tilma over them, and asked him to go to the bishop. As Juan Diego unfurled his tilma, the roses fell at the bishop’s feet; a miracle was revealed!

But, a second miracle had also occurred. For imprinted on Juan Diego’s tilma was a miraculous image of the woman who had appeared to him, the Blessed Virgin Mary herself. This image of Mary remains on the tilma to this day and can be viewed in the Basilica of Our Lady of Guadalupe in Mexico.

My sister Laura was able to go on a pilgrimage to Guadalupe, Mexico, in October 2019, where she learned the historical implications of the roses of Tepeyac and of the image of Our Lady on Juan Diego’s tilma. Here she became acutely aware that the message of Our Lady of Guadalupe and of the image on the Tilma that stopped the sacrificing of humans and converted tens of thousands of Aztecs in the 1530’s, are relevant to our time as well.

Laura writes, “We just spent the afternoon at the Aztec temples. For a few months now I’ve sensed our Lord saying that the human sacrifices must stop. I kept thinking He was talking about abortion, yet I sensed Him saying this in connection to the Roses of Tepeyac. I understand now that the Roses of Tepeyac in our time are women whose bodies and souls are being sacrificed to ‘false gods’ in the name of love and marriage.”

Even a cursory look around will reveal that we, culturally speaking, are hip-deep in some diabolical distortions of love and sex and marriage. The pendulum measuring the meaning of our human sexuality has swung to a point far far away from God’s original plan and design.  Today, I want to particularly write about how these distortions have led to staggering increases in sexual violence – especially sexual violence within marriages.

In our time, similar to the Aztecs of Juan Diego’s day, far too many humans are being sacrificed to false gods. In the Aztec culture, individuals went willingly to be sacrificed because they believed their sacrifice would appease the gods and protect their families. In our time, far too many women allow their dignity and their purity to be sacrificed to the false gods of lust, pornography, and other forms of sexual violence. I’ve ministered to many women who have gone willingly to be sacrificed because they believe it is their ”duty” as a wife, or that it will keep their families intact or their children safe. This is profoundly unacceptable!

Laura writes, “While we were at the temples of the moon and the sun I came to understand our Lord’s words, “The human sacrifice must end” as I saw in my mind’s eye images and memories from my past and even some that I did not recognize. My heart physically hurt and I could barely keep walking and pretending to be present to the group. As our tour guide spoke about the Aztecs I knew and understood ... this is exactly what I had done every day of my marriage. I falsely believed my sacrifice in our bed would appease God and bring healing to my husband. But in fact, me sacrificing myself to him in this way led to the desecration of himself and to our marriage, and harm to our children.”

Our Lady’s appearance to Juan Diego all those centuries ago taught the Aztecs that the Son of God shed His blood once and for all and that the One True God does not demand human sacrifice. This is still true in our time.  God does not want women to sacrifice themselves – their bodies, their dignity or their purity - to the false god of lust.

Each and every time any woman is raped, violated, emotionally coerced, and threatened matters to Jesus immensely, and oh how His Heart aches! Jesus abhors the sacrificing of His precious Roses, especially within marriage.

While on her pilgrimage, at the font where Juan Diego was baptized and later presented the roses to the bishop, Laura believed she heard our Lady say, “I am gathering the Living Roses,“ with the understanding that Mary is gathering the women whose homes and marriages are deserts, where their dignity has been violated, and leading them to our Lord for healing and comfort. Gathered in Mary’s mantle, they become a fragrant beautiful blooming bouquet of living roses. They, like the roses of Tepeyac, that blossomed in the Mexican desert, will bloom in the dark, dry, cold “winter of exile” where no one would expect such beauty and new life.

During this month of October, perhaps you would add this intention to your Rosary and daily prayers: for the healing of hearts, marriages and families impacted by domestic violence of any kind.

Dear humble and gentle Juan Diego, Our Lady entrusted her precious roses of Tepeyac to your care. She lovingly placed them in your tilma and asked you to keep them safe. Please pray for all men that they would choose to use their gift of masculinity to humbly protect and nurture women. Please pray for all God’s living roses who have been wounded by the thorns that were meant to protect them. May Mary, Mystical Rose, place them lovingly in your arms so that you might guard them tenderly and guide their path to Christ the Bridegroom. Amen. 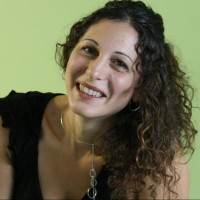 De guides women along the journey to spiritual and emotional healing, through coaching, deliverance prayer, and healing retreats. At YouAreMadeNew.com, De walks alongside women as we grow, heal, and discover the abiding presence of Christ within our own hearts. De invites you to join the Catholic women’s community, Hope’s Garden, which she cofounded.

Does Jesus Christ's death on the cross truly mean all sins can be forgiven?
Read
Christ's Embrace
Read
Uniting our Rejection with Christ's
Read