Margaret Rose Realy, Obl. OSB, describes the serious symbolism contained in the nut we enjoy in so many holiday meals.

If we are busy with families, we usually prepare or share in a Thanksgiving Day fare. One of the popular ingredients for that day is often the walnut. I love it in apple or broccoli salads, autumn harvest pies, or — as my grandmother often did with her Henry Quackenbush nutcrackers — unshelled in a bowl.

That unassuming nut so many of us love has some serious Christian symbolisms!

The black walnut, Jugulan nigra, is native to the eastern United States and the bane of most gardeners. The walnuts we are more accustomed to eating are the English walnut, Jugulans regia, which are not native, being introduced on the west coast by Franciscan monks in 1769.

Because of its tough outer hull and woody shell, the nut symbolizes the protection of precious contents. It can also symbolize the Holy Trinity, Christ, matrimony, and fertility because of it copious amounts of fruit!

Lucia Impelluso writes, in Nature and Its Symbols:

In Christian culture in general, the image of the walnut, with its three parts, is associated with the Trinity. Saint Augustine … asserts that the nut may be considered a symbol of Jesus Christ. According to this interpretation, the outer hull represents the flesh, the wood shell stands for the cross, and the kernel alludes to Christ’s divine nature. Generally speaking, the image of the walnut in art should be read in this light. (Stephen Sartarelli, trans. Nature and Its Symbols, 172)

Many scholars assume that the grove of nut trees that Solomon went into searching for love (Song 11:6) were Persian walnuts, now commonly called English.

The green hull encasing the shelled nut can be steeped to produce a rich brown dye. During Jesus time the walnut trees grew around the Sea of Galilee. Some scholars propose that his cloak was dyed, probably by his mother, from the walnut casings.

CLICK TO TWEET
That unassuming nut so many of us love has some serious Christian symbolisms! #catholicmom

The single walnut at the bottom of this painting, The Virgin of the Walnut from the Master of the St. Bartholomew Altarpiece (1500-1510), indicates the divine child in Mary's arms. 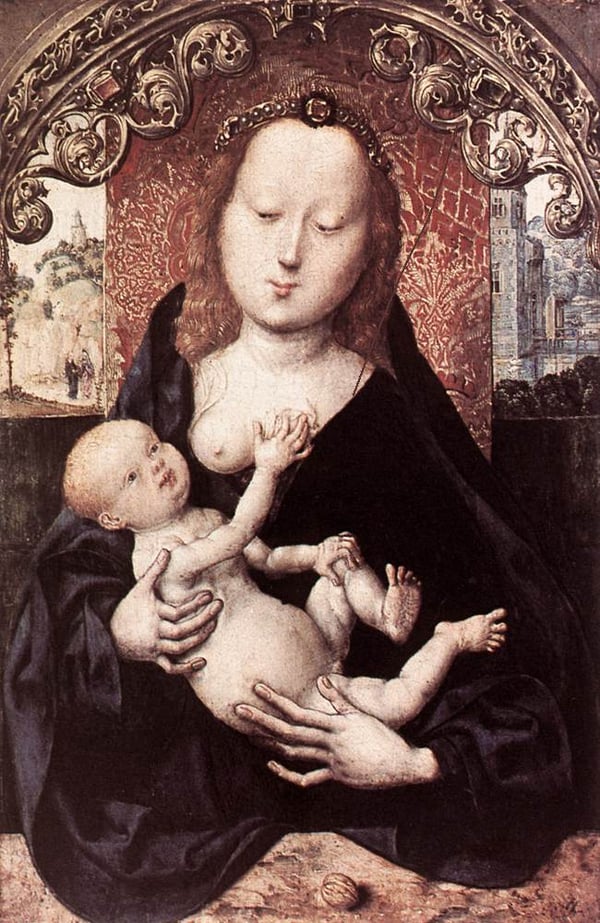 Jesus standing under a walnut tree represents his divine nature and the fruitfulness of his ministry in The Baptism of Christ by Piero della Francesca, 1448-1450. 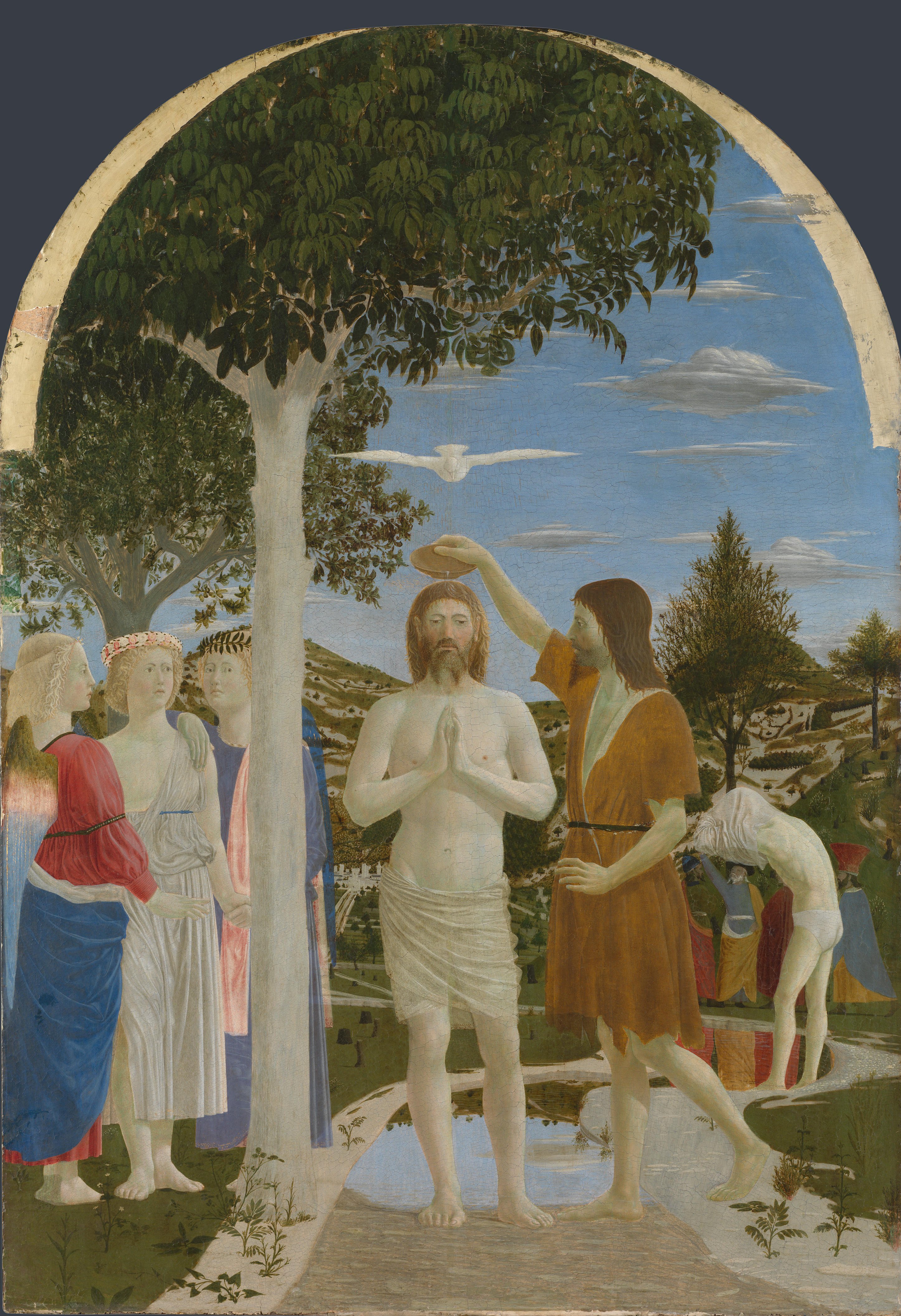 St. Anthony near the end of his life, and from his desire for solitude, had a tree house built in a walnut tree as a hideaway in Camposampiero, Italy. The tree, symbolizing the Holy Trinity, sheltered him halfway between heaven and earth. This paining, being one of many portraying his hideaway in the branches is Saint Anthony in the Walnut Tree and Two Saints by Lazzaro Bastiani, 1505, Venice, Accademia (Stephen Sartarelli, trans. Nature and Its Symbols, 174). 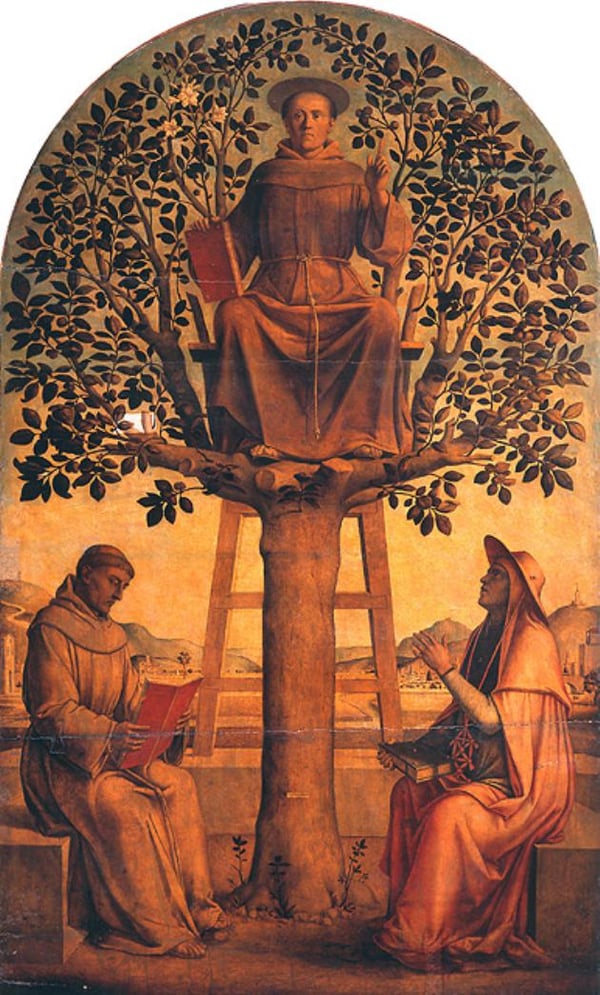