What You Need To Know Before Living Together By Stephanie Weinert 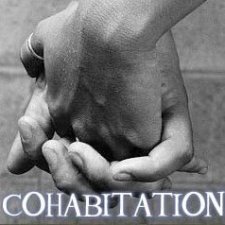 A special thanks to our sponsor CatholicMatch.com for sharing the following article by Stephanie Weinert.  Stephanie's article will likely make you think twice about the topic of living together before marriage.  If you're single, or have a family member or friend who may be leading a single lifestyle, please share this article with them and refer them to CatholicMatch.com for additional resources.

Cohabitation has become as commonplace as seeing Angelina Jolie’s face on tabloid covers in the checkout aisle these days. "Everybody" seems to be doing it, and "everybody" seems to think it’s a good idea. In fact, more than 62% of young adults believe it would be a good idea to cohabitate before marriage.

On the surface, cohabitation seems logical. Divorce rates are skyrocketing worldwide, yet you want lifelong love and lasting happiness when you get married. You’d test drive a car before buying it, so why not take your relationship around the block to make sure everything works well before marriage?

Unfortunately, shopping for cars and spouses do not require the same techniques. Research has overwhelmingly shown that the only reasons anyone would ever want to cohabitate are…

1. You think commitment is overrated

If you think commitment is an overrated virtue in a relationship; that partners should be allowed to cheat on each other; and if you girls don’t mind living indefinitely with a guy without hope of a marriage proposal, then cohabitation would suit you well.

Cohabitation kills motivation and incentive for men and women to commit exclusively to each other in a relationship. Studies show that those who cohabitate before marriage are three times more likely to engage in an extramarital affair.

Cohabitation particularly affects a man’s ability to commit. According to the Family in America Report (March 2004), young men unwilling to cohabitate are 133% more likely to marry.

The Catechism of the Catholic Church explains why cohabitation is not good preparation for faithfulness in marriage:

#2391: "Human love does not tolerate ‘trial marriages.’ It demands a total and definitive gift of persons to one another."
#2390: "…The expression ‘free union’ is fallacious: what can ‘union’ mean when the partners make no commitment to one another, each exhibiting a lack of trust in the other, in himself, or in the future? … These situations offend against the dignity of marriage; they destroy the very idea of the family; they weaken the sense of fidelity [and]… are contrary to the moral law."

So what’s missing in cohabitation that causes a commitment failure? The wedding ring: that small piece of jewelry placed on the finger that symbolizes "til death do us part."

If you enjoy bonding romantically with a person and then breaking up and getting your heart broken, then cohabitation is definitely the way to go. Cohabiting relationships are usually brief, and they often cause a string of successive relationships, each starting with a lower level of trust.

Sure sounds like a great way to prepare for divorce later in life.

If you don’t want to be happy in life, by all means, cohabitate! Cohabiting couples report lower levels of happiness and higher levels of depression than married couples.

On the other hand, if you want to be happy, follow God’s plan for true happiness. The Bible promises happiness to those who follow His will for our lives:

"Hear instruction and be wise…Happy is the man who listens to me, watching daily at my gates, waiting beside my doors. For he who finds me finds life and obtains favor from the Lord" (Proverbs 8:33-35).

"Blessed is every one who fears the Lord, who walks in his ways! You shall eat the fruit of the labor of your hands; you shall be happy, and it shall be well with you" (Psalm 128:1-2).

If you love watching couples scream at each other in front of their friendly neighborhood judge, and would like to experience the same splitting headaches in your own relationship, then you’re a perfect candidate for cohabitation.

While 62% of young adults agree that living together before marriage is a good way to avoid eventual divorce (according to a 2001 Gallup survey), the reality is cohabitation actually increases your probability of divorce by at least 46% (c.f. 1992 National Survey of Families and Households). [Note: this is a conservative estimate. Some studies found cohabitation increases one’s probability of divorce by as much as 75-80% (c.f. National Marriage Project, 2002)].

Thanks to the mistakes of our parent’s generation, who issued in the sexual revolution in the 60s, you and I already have about a 50% probability of divorce without any other factors involved. Add a much higher risk factor to that figure by cohabiting, and we might as well start auditioning for Divorce Court right now!

One reason for the correlation between cohabitation and divorce, according to David Popenoe and Barbara Dafoe Whitehead, is the increased levels of selfishness and reduced level of commitment: "People’s tolerance for unhappiness is diminished, and they will scrap a marriage that might otherwise be salvaged." Furthermore, a study conducted by the National Survey of Families and Households found that "no positive contribution of cohabitation to marriage has ever been found."

Cohabitation is dangerous for the physical well-being of women and children. Women in cohabitating relationships are more likely to report physical and sexual abuse. Some researchers found that "aggression is at least twice as common among cohabitors as it is among married partners." Canadian and U.S. studies also identified that "women in cohabiting relationships are about nine times more likely to be killed by their partner than women in marital relationships" (Todd Shackelford, Aggressive Behavior, p. 27, 2001).

On a recent radio broadcast I hosted on the topic of cohabitation, a police officer from a college campus in Phoenix called in to confirm that the above correlation between cohabitation and abuse are true. "We get calls for domestic issues all the time," the officer said, "and nine times out of ten it’s a live-in boyfriend and girlfriend situation."

Cohabitation is also dangerous for children living in a home with cohabitors. According to the 2000 Census Bureau, 41% of all unmarried-couple households include a child under 18, and three quarters of children born to cohabiting parents will see their parents split up before they turn 16. Children living in cohabiting households with "step-fathers" or "mom’s boyfriends" are at a higher risk of sexual abuse and physical violence, including lethal violence, than children living with married biological parents (c.f. R. Gelles and J. Lancaster, eds., Child Abuse and Neglect: Biosocial Problems, 1992). So unless you want to see your child become the next Eminem, don’t bring him or her into a cohabiting relationship.

6. Just for Girls: you want to marry a guy who can’t talk

Ladies, if you enter a cohabiting relationship with a man before marriage, and engage in pre-marital relations, you will kill his ability to verbally communicate with you later in marriage.

As we all know, God designed men and women differently – us women got the lion’s share of verbal communication skills and guys are wired more physically than we are. During courtship, a man has a chance to learn how to express his thoughts and feelings to a woman – he learns to verbally communicate with her.

If a couple becomes physically active during the time when they should be learning how to verbally express love for each other, the girl will spend the rest of the relationship waiting for her man to talk to her, when in reality her relationship has become a re-make of Cool Hand Luke: "What we have here is a failure to communicate."

Lack of communication is one of the major reasons listed on divorce filings today.

All of the social, emotional, and physical issues aside, cohabitation also directly affects your relationship with God and your eternal destiny. When we disobey God’s law and engage in a relationship that contradicts the Creator’s design for man and woman, we sin and turn our back on God’s love and His plan for our lives.

The Catechism of the Catholic Church clearly explains the immorality and eternal consequences of cohabitation:

#2353 "Fornication is carnal union between an unmarried man and an unmarried woman. It is gravely contrary to the dignity of persons and of human sexuality which is naturally ordered to the good of spouses and the generation and education of children."

#1755: "There are some concrete acts – such as fornication – that it is always wrong to choose, because choosing them entails a disorder of the will, that is, a moral evil."

#2390: "[These situations] are contrary to the moral law. The sexual act must always take place exclusively within marriage. Outside of marriage it always constitutes a grave sin and excludes one from sacramental communion."

The Bible also clearly outlines the eternal effects of unrepented cohabitation. St. Paul wrote: "Do not be deceived; neither fornicators nor idolaters . . . will inherit the kingdom of God" (1 Corinthians 6:9-10).

Because mortal sin turns the mind and heart away from God, it’s not surprising that researchers have found that couples who cohabitate are "less religious" than married couples. (c.f. Linda Waite, "The Negative Effects of Cohabitation".)

"But I don’t want my relationship to end in divorce!"

Of course, those couples who choose to cohabitate before marriage aren’t doing so because they love Divorce Court. They’re cohabiting because they desire true love – they want to safeguard that their future marriage will last a lifetime. Research shows that many cohabiting couples come from broken homes or divorced families, and they’re looking for ways to avoid their parents’ mistakes.

Unfortunately, our society isn’t presenting the brutal truth about the effects of cohabitation to our generation. That’s why it’s so important for us to search the Bible, the teachings of the Church, and solid research from the social sciences to learn how to best prepare for lifelong love.

Just remember: taking the car around the block doesn’t help when it comes to relationships. Saying "I Do" is the best way to increase your chances that you will.

If you or any single friends you know have questions about the issue of cohabitation and its potential effects on your life and relationships, I cannot recommend this book highly enough: How to Avoid Falling in Love with a Jerk, by Dr. John Van Epp

Stephanie can be reached at stephanie@catholicmatch.com