No ordinary Joe (or Mary or Jesus) 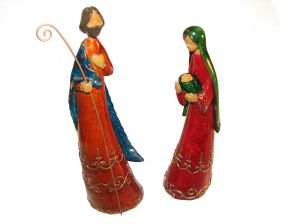 One of the great joys of working in a parish is the wonderful families I get to meet. And as a youth worker, I get to see the fruit of the years of hard work that parents have invested in their kids.  I have learned that though every parent loves their child immensely, some seem to do exceptionally well at their task of child rearing.  Every time I meet one of these families, whose kids seem a bit more responsible, faithful and respectful than average, whose family is closer and more at ease with one another, whose marriage is stronger for the years together rather than more weary, my radar goes up and l listen and watch.  If I know them well enough I will ask them for advice.  These families give me hope that it is possible to raise great kids today.  They remind me that the myth that kids must turn into ogres and parents into idiots on the 12th birthday is just that- a myth.  And very practically they give me precious nuggets I can put into practice now with my little ones that will hopefully pave the way to a virtuous adulthood.

Isn’t that how it is with anything? We want to get advice from someone who has been there and done that, but done it really well.  To learn to do something right, we go to the experts.  Which is why in the Catholic faith we give so much credence to the saints.  A saint is a person who has been declared by the Church, after much intense investigation, to have lived a life of heroic virtue.  In other words, they were experts at holiness.  They were experts at being human.  We do well to follow their examples and imitate the virtues they practiced, in whatever state in life they lived.

The greatest two saints are some that we celebrated during the Christmas season in a special way on the Feast of the Holy Family: Mary and Joseph.  They, of course, had a very special mission and lived very, very heroically.  This Christmas season, as I reflected on these two great saints, I became aware of two pitfalls we can fall into with saints, and especially with the Holy Family.

I said before that the people we want advice from are the ones who have been there and done that, but exceptionally well.  The first pitfall I think is to lessen the struggle of the saints in their quest to become holy.  This trap tricks us into thinking the Blessed haven’t been there.  The saints were not born into some hermetically sealed bubble which protected them from temptation, heartache and struggle.  What we are doing when we fall into this trap is we are making excuses for why we can’t follow in the footsteps of the saint in question.  Well, Mary was conceived without sin. That’s why she was a great saint. I wasn’t so that’s why I’m not! That saint didn’t have to face the issues of the modern family. That’s why I can’t be a saint! It’s too hard in today’s day and age! These are flat out excuses.  The saints suffered greatly. They were tempted. Some of them did terrible things before they were converted.  Some lived in modern times, some in times much worse than ours.  Our circumstances are no different.  The saints show us that heroic virtue can spring from any kind of branch with God’s help.  We are all called to be holy.

The second pitfall is the opposite.  We can emphasize the weaknesses of the saints to the extreme that they no longer seem heroic to us.  The saints faced all the same obstacles that we do, but what makes them saints is that they overcame them! You can often see this with Mary especially.  People think of how they would have felt being pregnant out of wedlock in Biblical times and assign those reactions to Mary.  Now, this is not to say that we shouldn’t try to put ourselves into biblical texts to explore what the protagonists must have been thinking or feeling.  It’s a great meditative exercise.  But let’s remember that the saints are saints precisely because they were able to persevere beyond what the average person could do.  Sure Mary knew the penalty for being caught pregnant before marriage.  But she also had a very significant chat with an angel and helped deliver the baby of her 80-year-old cousin.  Plus, she was sinless.  I don’ t think she was doubting and scared.  I think she trusted God deeply!

When we project our own weaknesses onto the saints, it is usually done in an attempt to make them more accessible, more “human”.  The fact is, though, that in their strength, through God’s grace, the saints are the ones that are more fully human, not us in our sinful tendencies.  We equate humanity with weakness and sin, but that is just sin after the Fall. That would be like the way abuse victims equate love with being beaten and mocked.  Just because sin is our experience of humanity doesn’t mean that that is what humanity is meant to be.  The saints are so amazing because they give us a window into what we should be striving for, and hope that it is attainable.

So, just as I look up to successful families as signs of hope for my own family, so we should all look to the saints to see what is possible for our own holiness.