NFP: No Holding Back 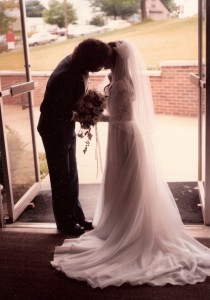 “The total physical self-giving would be a lie if it were not the sign and fruit of a total personal self-giving, in which the whole person, including the temporal dimension, is present: if the person were to withhold something or reserve the possibility of deciding otherwise in the future, by this very fact he or she would not be giving totally.” John Paul II, Familiaris Consortio, On the Role of the Christian Family in the Modern World

After waiting for three years to be married (and to have sex), I greatly anticipated our marital consummation. In my mind, we would, of course, use birth control. I never really considered that James would be against that. The way I saw it, that was a totally different issue from the pre-marital sex issue. At the time, even though I was Catholic, I didn’t know anyone who believed that birth control was wrong (except perhaps the Pope).

Since we were living 500 miles apart (with me in New Jersey and James in Canada), I brought the topic up for discussion about six weeks before our wedding, during one of our biweekly phone calls. I shared with my then fiancé that I wanted to be fitted for a diaphragm. He was silent for a moment, so I asked, “Is there anything wrong?”

“Well, yes,” he answered. “I had always hoped that we wouldn’t use birth control.”

He gently tried to explain his reasons, but I wouldn’t listen. I felt like he was making a big deal out of nothing. After all, I thought, doesn’t everybody use some form of birth control?

This actually started our first fight in over three years of dating. We were teenagers when we first met and James was only 18 when we were engaged. “Well, if we aren’t going to use birth control,” I said, “and we’ve already decided that we need to wait a few years before having kids, what are we going to use?”

He answered, “I know someone who uses Natural Family Planning.”

“Natural Family Planning? Isn’t that rhythm?” I knew a lot of people who had used the rhythm method, with little success. “I don’t think so,” I replied.

At the time, it seemed like James was splitting hairs. After we ended the phone call, we continued writing back and forth. What worried me was when James wrote, “I’d rather have sex once a month with no birth control than every day with birth control.” I remember thinking, What planet is he from?

Later, I received a letter in which he wrote the following: “When I think of me using a condom, it means that I’m actually holding back a part of myself. And if you were using a diaphragm or the pill or something, you would be keeping a part of yourself from me. When we give ourselves to each other, it should be a total gift, not a partial one.” As we exchanged letters, I began to see that this whole issue was connected to the pre-marital sex issue. In the end, I decided to trust my future husband.

We took an NFP class, but I still wasn’t convinced. In fact, it took me (a rather stubborn person) six months to see that NFP had an extremely positive impact on our relationship. I saw that it helped to preserve the romance and unity in our marriage. I became more aware of my body. I didn’t feel used (on the contrary: I felt loved.) I found that NFP was as effective in avoiding pregnancy as most other methods of birth control with no physical side effects. And…that it works effectively to plan a pregnancy as well. After 28 years (and five children), passion and romance are still very much a part of our marriage. (My first novel, Emily’s Hope, is the fictionalized true story of our courtship and my conversion story.)

James and I have now been certified NFP teachers for the Couple to Couple League for 26 years. If you’re interested in NFP, email me at info@fullquiverpublishing.com for more information or leave a comment below.