A Catholic Alternative to “Trashy” Novels 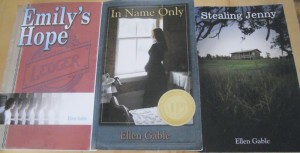 I have always been an avid reader. Even now, I usually read two to three novels per week. Years ago, before my re-version, I devoured trashy romance novels like they were candy.

Like anyone, I love a good story, but I especially enjoy a compelling romance or suspense novel. As I grew in my faith, I no longer wanted to read fiction with explicit sex scenes. So I began seeking out Christian fiction. However, I yearned to read good, compelling fiction with Catholic themes.

Partly in response to this desire, I began writing my first novel, Emily’s Hope, in 2001. I’m a certified NFP teacher and I’ve debated the “contraception” issue with non-Catholics, liberal Catholics, ex-Catholics and non-practicing Catholics. So when I sat down to write my first novel, I knew that not only did I want to write a compelling story, I also wanted to include information on the Theology of the Body and NFP. I figured that if I was going to write a novel, I wanted to write one that had the potential of evangelizing.

Emily’s Hope is the story of “Emily” (loosely based on myself) and “Katharine,” my great-grandmother. In the seven years since it’s been published, I’ve received many letters from “fans.” One teenager approached me at a Catholic conference and said, “You know, Mrs. Hrkach, your book helped me to understand the Theology of the Body better than any textbook I’ve read.”

With my second novel, In Name Only, I wanted to write a Catholic historical romance that would be hard to put down, a romance that didn’t shy away from Catholic teachings on sex and marriage.

Amazingly, In Name Only won the Gold Medal for Religious Fiction in the 2010 IPPY Awards (the first Catholic novel to do so). It was in the top 100 of Religious Fiction and Christian Romance for six months and continues to sell extremely well on the Kindle. One reviewer on Amazon.com writes, “When I read In Name Only, I was floored. It was so good! I could not stop reading it! I read it in a weekend staying up until 2am on Sunday night/Monday morning to finish it even though I had work the next day… what really gripped me was how Ellen Gable took Theology of the Body (TOB) and turned it into a novel. TOB is near and dear to my heart. I loved how she incorporated the teachings of the Church and weaved them into such a complicated storyline…”

My third novel, Stealing Jenny, is a suspense thriller about the kidnapping of a pregnant woman. The husband and wife protagonists are open to life, NFP-using, devout (yet imperfect) Catholics. One of the main characters is not religious. Another character is a born again Christian. I purposefully created Stealing Jenny so that the teaching was more subtle. And, of course, I wanted to write a book that was hard to put down. Therese Heckenkamp of Traditional Catholic Novels, said “When I had to put this book down, I literally could not wait to pick it up again…Stealing Jenny is a smoothly written, chilling tale of gripping suspense. There are terrifying moments and heart-wrenching moments. Catholic faith and hope are tested. Above all, the sacredness and privilege of precious new life is made indisputably evident.”

A few weeks ago, Stealing Jenny hit #1 in Drama/Fiction/Religious on Amazon Kindle and has remained in the top ten for the past three weeks.

A warning: my novels, although not explicit, do deal with mature themes and are appropriate for teens and older.

All my books are available on Amazon.com in print or on Kindle.

Of course, my novels are not the only Catholic alternatives to secular “trashy” novels. Do you have a favorite contemporary Catholic novel? Please feel free to comment below.