The Adjustment Bureau - Fate vs. Free Will 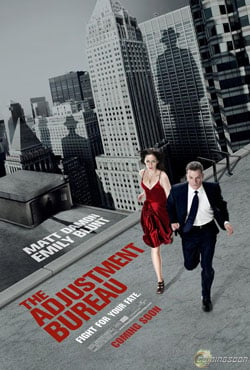 This week, I had the opportunity to attend a sneak peek of the new Matt Damon movie The Adjustment Bureau.  My invitation came from an organization that markets entertainment options to people of faith.  Somehow I'd missed the trailers for this film, so I went in to the screening with only the vaguest of ideas about the movie's content. Since drifting off to sleep while my husband watches the Bourne trilogy for the umpteenth time is a regular occurrence for me, I assumed the film would have lots of Damonesque action sequences.

In reality, The Adjustment Bureau seemed a mix to me of romance, philosophy, and science fiction.  While we believers will likely superimpose our perspectives upon it, the film doesn't overtly refer to "God" or "guardian angels" or "heaven".  The plot introduces us to David Norris (Damon), budding young politician, and talented dancer Elise Sellas (Emily Blunt).  We have a front row seat to their instant chemistry, but soon learn that the suit and fedora clad agents of the Adjustment Bureau intend to keep these two apart.

In some senses, The Adjustment Bureau fascinated me in the same way I enjoyed Inception.  It's a film that can be enjoyed at its most basic level.  Matt Damon is awesome, and Emily Blunt is even better -- and the combination of the two together really worked well for me.  The film has humor, romance and enough action to please Bourne fans.  It also has some cool twists and turns.

But those who pay attention, and who care about popular culture's take on faith, will find fodder in this film for some deeper conversations.  The film addresses head-on the conflict between predestination and free will.  I'll admit to not particularly liking -- or completely agreeing with -- its conclusion in that respect. But I'll also share that since I saw it, The Adjustment Bureau has put some big thoughts and questions into my mind - topics I'll be anxious to discuss with anyone else who sees the film.

The Adjustment Bureau earns its PG13 and AIII ratings for language and a (completely unnecessary) premarital sex scene.  The following reviews may help you determine if the film is suitable for you and your older teens:

I'll be anxious to hear from those of you who venture out this weekend to see The Adjustment Bureau.  And simply because it's super awesome and Steven Greydanus is one of my heroes, I hope you enjoy his "30 Second Review" of the film: