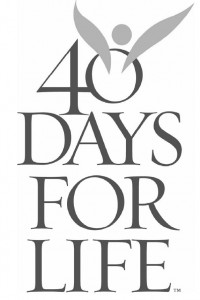 Right now, there is a nation wide campaign, 40 Days for Life! Yesterday, I spent an hour on the curb as part of our Parish's contribution to the prayers and witness against the culture of death that allows for abortion. We were asked to stand near a clinic in Germantown that engages in late term procedures.

The first thing I learned is I'm more of a coward than I knew. I believe that every child ought to be safe in the womb. Our very faith is based on as far as humans are concerned, the most unplanned pregnancy that all of History ever recorded. Even in the womb, He was recognizable by those who loved Him. But walking to stand at the corner with the signs was an act of activism I'd not done before and somehow, I felt fearful standing there.

Setting the alarm on my phone to mark the time, from 7-8, I took a look around. It was a Friday night, it would be getting dark. No one was coming to the clinic at this hour, not many people were even at work in the complex and I wasn't sure how much witness standing on a corner would do.

My brain felt crowded with warnings and doubt...This wasn't the wisest thing I'd ever done....My car might get a ticket....I wasn't illegally parked but somehow I wondered if it was okay....Standing there felt vulnerable. I wanted to go home but the phrase floated into my head "Could you not stay awake an hour?" and kept me rooted to the spot. Someone before me had put out a sign and a creche and flowers. Just then, a mother with twins walked by. She gave a half smile smile but her daughters reached out for the bouquet. "We are made for beauty," I thought, it attracts us to be, to experience rather than to go about our business of doing. The flowers and signs that other people believed this, other people had witnessed to this, gave a little boost of courage. Why was I afraid?

I was grateful to have my 7 week old with me, she was both my sign to the outside world of what abortion denies, and my courage. I'd look in her eyes, half closed and sleepy from having a full belly as she yawned and even if she didn't smile, I did. I held her that hour, lapsing into the rosary, trying to show her off to the passing cars and grinning when a truck would give me a happy double beep. But I kept circling back to the question. "Why did I feel so anxious affirming what I believe?"

"I like to be liked." I answered myself. Standing out here declares me (as if having ten kids didn't), it is a side I've chosen affirmatively to hold not just in my heart but publically. In the quiet on the side of the road, I found a part of myself that maybe needed to be less listened to, but which had become ingrained in my behavior. Someone might not like me as much if I seemed too religious, too political, too serious about a value that was so controversial. I could see how I'd held myself back in other areas too, how hemmed in my heart was, how unwilling except in safe company I'd been to be a full witness. I could tell myself it was prudence, tact and manners, but part of it was that old scar of wanting friends.

Old scars reveal old wounds. I always wanted people to like me, craved it...I needed to like being liked less. No wonder I'd fought standing still in the silence, meeting myself wasn't very pleasant. This was why courage is a spiritual gift, because it takes more than one's self to do some things, to face some things, to accept some things, whether it is witnessing to gifts and grace in the face of indifference, evil or ignorance, acknowledging one's own poorer traits, or recognizing the why of one's own tendency to err. I was too attached to feeling comfortable and liked. My skin felt all the thinner for recognizing I was thin skinned. I didn't realize going to the corner was going into the desert. I'd been similarly not too vigilant in my Lenten observance of adoration. Yes I'd been busy, but part of that was being too busy to let myself be probed or pushed by God beyond my boundaries.

This is Lent. The season is made to make us recognize we should not be too comfortable in our own ways, or we will not allow for Christ to be more of our lives. We will want to stay fixed, safe, known and yet untethered. But ours is not a tame God and there are no tepid souls in Heaven. Here on Earth, we will avoid going into deeper waters until we are all fished out. Whenever we do go out deeper, we are surprised beyond measure by the richness of the experience. Our nets nearly burst with plenty. I tremble when I consider that this was only an hour.

Tech Talk: The Rosary of the Hours
Read
The Hour is Late
Read
If Only
Read