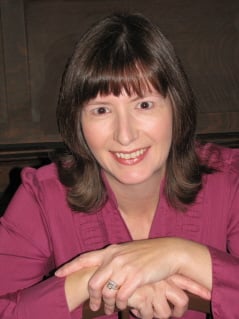 Editor's Note: Today, we're thrilled to highlight the writing of Sandra Wilkins, a Catholic Mom and the author of the great books Rose's Hope and Ada's Heart. I hope you enjoy learning more about Sandra and that you'll check out her terrific writing! LMH
Sandra Wilkins is a Catholic author and home schooling mother of two girls whose passion for historical fiction led her to write the kind of romance novels that reflect the wholesome values found in Oklahoma at the turn of last the century.  Recently released, Rose's Hope is the second installment in The Heartland Romance Series from Avalon Books.  The entire series is set in Shawnee just before statehood came to Oklahoma.  The first installment, Ada's Heart, follows an actress, Ada Marsh, who quits her old way of life and befriends two other young women, Rose Dennis and Gwen Sanders.  Ada has to rely on God before she will let local farmer, Luke Logan capture her heart.

Rose's Hope continues with their friendship while Rose must decide whether to turn her hopes toward a grieving widower with an infant or to another more persistent suitor.

“With my writing, I try to take the reader back to a simpler time, but I also hope to show how our lives today still parallel those from the past.  Every generation of women and men must overcome obstacles in their lives. Life is full of uncertainty, but I try to show that with God’s help and a little determination those problems can be solved.”

Wilkins used this same determination to follow her dream in becoming a published author.  “I’ve wanted to be a writer since I can remember.  My grandma was instrumental in encouraging me to “keep writin’ those stories”.  I probably wouldn’t have had that dream come true if it hadn’t been for her encouragement then.  I wrote my first novel in high school, and tried to polish it and get it published for years.  After several rejections, I put that book aside, and I came up with the idea for what became The Heartland Romance Series.  Persistence always pays off in the long run.”

A slight dilemma occurred as Wilkins had to make the decision which genre to write.  “I’ve always been fond of romances, but knew I could never write something that I would be embarrassed for my mother or my daughters to read.  I’ve read many Inspirational romances and have been put off by the evangelical content at times.  I was raised Catholic and wanted Catholic characters.”  The answer came when she came across Avalon Books, a publisher that prints wholesome romances.  “When I wrote, Ada's Heart, I was still unsure which market I would be shooting for so the religious content is a little generic.  I used Reverend instead of Father Schneider, etc.  But, I’ve been able to rectify that in the following books.  I especially wanted to do that since a backdrop of all three stories is the raising money and building of the picturesque St. Benedict’s Church which was and is still a beautiful Catholic church in Shawnee, Oklahoma.”

Wilkins is grateful for the opportunity to have her stories published.  The third book about Gwen is in the hands of Avalon Books, and she is hopeful it will be released soon.  In the meantime, she is writing a new series set in another real Oklahoma town.

Ada's Heart and Rose's Hope are available at www.amazon.com and www.avalonbooks.com.   The author can be reached at her website www.sandrawilkins.com.