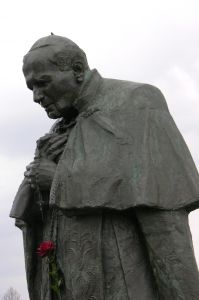 Uncertainly, I searched the cloudy, pre-dawn sky in the morning of October 6 1995. Last night the Holy Father’s mass a Giant’s Stadium had resembled a baptism “en masse” with its torrential rain. Friends had warned me against bringing my 2 year old daughter, Gabriela, to the Holy Father’s gathering at Aqueduct Racetrack in New York City, saying, “It’ll be too long fore her to go without food, and they’re prohibiting coolers”. Stubbornly, I said that I’d brave rain and a restless toddler for the chance to bask in the glow of my hero, Pope John Paul II.

It wouldn’t be the first time for me. In 1979, at the age of seventeen, I stood on my seat with thousands of teenagers who screamed for fifteen solid minutes, “JOHN PAUL II, WE LOVE YOU!!” as the Holy Father entered Madison Square Garden. Something of his magnetic love had remained with me all of this time, making a diverse and often dissenting Church seem like a family (and what good family is without conflicts?)with a most loving “Papa” as its head. Now it was time for the family reunion, and all of Long Island seemed to be converging at the racetrack. . . from the reaction of  bewildered store clerks, marveling at such joyful commuters at 5AM, to the scores of buses clogging narrow side streets,  to the tiny babushka’d grandmothers making their way on foot past the gridlocked buses outside the stadium, rosaries in hand.

Another memory flashed by me, of many similar ladies, facing into bitter winter winds for miles on their way to celebrate the Solemnity of the Immaculate Conception of Mary, in Lublin, Poland, on December 8, 1987. It was not accidently the day of the meeting of Gorbachev and Reagan, during Solidarity’s darkest hours, when the structure of Communism began its historic collapse. This nation kept the flame of hope burning brightly in an ancient church, with a congregation overflowing to kneel on frozen cobblestones outside, a two-hour Mass and rosary, beneath the Papal Coat of Arms, which reads “Totus Tuus” (totally Yours) indicating his true devotion to Mary. Festoons of gold and white silk, the colors of the Vatican, flowed from coat of arms, giving the church a festive air.

Those feeble-looking grandmothers helped to topple the monster of Communism, with their faith and the inspiration of the man we were about to see. Would John Paul help American Catholics triumph over the “monster of indifference”? Would jaded New Yorkers receive his message with open hearts? These questions filled my mind as I prepared to leave the bus.

We entered the stadium breathlessly, though at a snail’s pace, arriving at our seats to see the brilliant morning sun illuminate the gold and white canvas around the altar platform. Our spirits lifted as we realize that there would be no deluge A stiff breeze set the altar canvas flapping and billowing furiously, like the sails of a ship caught in a gale at sea.

“A fishing boat”, I thought as we waited for the Pope’s helicopter to arrive. We, the Church in America, are adrift on a stormy sea; in a culture which ridicules our reverence for unborn life,  labels us intolerant for recognizing sexual sins, and fanatical for railing against the Culture of Death. A ship often set rocking from within by differing views on contraception, and women’s ordination. This is the ship John Paul was boarding. Would he calm the storm about us or quiet the anxious passengers?

A mighty cheer heralded the approach of the helicopter. We knew the moment had arrived; he was here! He appeared in the distance as a tiny figure, clothed in white, yet he conveyed tremendous love by his gesture of reaching out to us spontaneously. We realized, disappointed, that the “popemobile” could not travel towards us on the muddy racetrack. “Juan Pablo Segundo, te quieren todo el mundo” (John Paul II the whole world loves you) chanted the Latinos, while a group of French Canadians behind us said in wonder, “c’est le pape”(it’s the Pope). Our captain had indeed taken command of the ship.

“Yesterday, very strong rain; a sign of life, today very strong wind; a sign of the Holy Spirit! Good morning!” he greeted us, as we thundered our approval. “You are Peter, among us, Archbishop Daly of Brooklyn said, “our Rock against which no power can prevail!”

The clamor of this greeting gradually subsided and 88,000 thousand people by now perspiring in the climbing heat, settled down to hear the Word of God. The Holy Father’s powerful voice was rendered barely intelligible by the strong gusts of wind, but nevertheless, the crowd listened meditatively. No other father could have come so close to so many of his children at once, as he sang a hymn from his childhood in Wadowice, “come Holy Spirit, we stand in need of Your Grace”. And by that simple act, seemed as if her were holding all of us in a fatherly embrace as he told us how happy he was to see us. “The Holy Spirit” he continued, “is the active agent of the Church’s evangelizing mission.. . . the wind picking up, “giving us strength to meet its challenge”.

The theme of his mass is the progress of peoples, Christ’s message of salvation and hope is that ‘the people who walked in darkness have seen a great light’ the 20th century has witnessed this darkness, in the world wars, and many still suffer immensely as the human family searches for a path of justice and peace. Through the Holy Spirit, Christ works in our hearts, giving us a desire for the world to come, but also strengthening our noble longing to make every life more human..

New York is considered by the world to be a zenith of progress for more than 200 years, representing a new life for immigrants, who bring with them their cultural heritage from their countries and blend them into a new society. It also represents power, wealth and prestige. However, not every one here is powerful or rich. In our extravagance, we forget poverty. . . have the people here lost sight of the blessings which belong to the Holy Spirit? Is there room for the mystery of God?”

Divine love is the source of everything, Christ’s transcendent. Life, bought through the cross, and the Gospel which helps people enter the place of divine life. The Holy Spirit will act through all of this if we heed the truth.

There is no life worthy of the human person without a culture that honors marriage and family. The welfare of the community depends on the family as far as possible, with both parents present.

The Holy Father encouraged fathers to accept their share of responsibility for their children’s upbringing, and urged both parents to spend more time with their children

especially in moral and religious education, not just supplying their material needs.

Children deserve a home that is secure, affectionate, and has a morally correct family environment. The parents form the domestic church when they honor God when prayer is a normal event, where there are examples of virtue and the entire family shares the hopes, problems and sufferings of all.

To our delight, he affirmed

“this style of life is not outdated, for in this are the roots of human development and happiness”.

He continued, “We must unite to support one another despite our differences, to see and serve Christa in our neighbor, inviting the newcomer and the afflicted. We must do this to make a positive contribution to America, transforming our culture to a culture of life, working for the Kingdom of God, and a true progress of peoples where the light will shine in the darkness. Come, Holy Spirit, we stand in need of your light.”

As these comforting, yet challenging words worked their way into my heart, I chased Gabriela who ran joyfully through the pensive worshippers, drawing more than her usual quota of smiles, and dodging the cameras of journalists, (one of whom later filmed her angelically asleep on my shoulder). The Gospel in the Mass had stated. “I thank you Father, for what you have hidden from the wise and the learned, you have revealed dot he merest children.”(Matt.11:25) And my child, Gabriela, knew something important. She knew we were coming to see “John Paul” as she happily pointed to him on the TV monitors, she knew that we love him. So much for children being out of place here! Certainly the Walmeyers, voted family of the year by the Knights of Columbus, felt at home as parents and 11 children (two of who are adopted and have special needs) came forward to meet the Pope during the offertory procession.

And the wind gusted, billowing the fisherman’s vestments, sending sprays of water from the fountains into the crowd who though parched from a water shortage in the stadium, were joyfully singing, “Pescador de Hombres” (Fisher of Men). Pope John Paul II had done it; captured and strengthened the hearts of the people so that the raging cultural storms of the world would not frighten us, we left the Mass that day  confident that with our Holy Father at the helm, God’s Holy Spirit filling the sails, and Our Lady, Star of the Sea to accompany us, this boat would surely stay on course to its final port of call.