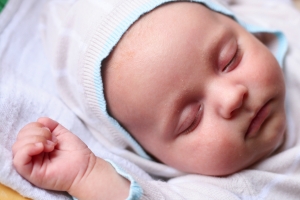 I was taught in medical school never to leave a newborn delivery without discussing birth control with the new mother.  The exhausted, delighted mothers and smiling fathers would always give the physician a puzzled look when asked, minutes after delivery, what their birth control plans were.  It seemed like a rude, dark interruption of the joyful fleeting moments after the miracle of birth.

We were also taught, at a Catholic hospital, to discharge post-partum mothers with a prescription for birth control.  "A condom alone is not enough," and "Breastfeeding is not birth control," were phrases I heard over and over.  No one talked about Natural Family Planning (NFP) except to say that it was not realistic.  It is shocking to me, as a physician, how few of my colleagues are aware that NFP can be up to 99% effective when practiced appropriately.

Well-meaning obstetricians are eager to hand out hormonal birth control and even sterilization during the immediate post-partum period.  They often tell stories of women who come in pregnant at their six-week follow-up appointment, or cry when they learn that they are pregnant while breastfeeding.  But somehow women don't know that dangers of hormonal birth control while breastfeeding.  They also don’t know that any medication containing estrogen derivatives can decrease breast milk production; sometimes so much that women are unable to breastfeed.  And very few obstetricians are able to instruct women on natural family planning during breastfeeding and the post-partum period.

Natural Family Planning is a method of avoiding or achieving pregnancy by becoming aware of a woman’s fertile periods and timing intercourse accordingly.  NFP is the only method of birth control which is consistent with the teaching of the Roman Catholic Church and the Theology of the Body.  NFP is not the “rhythm method,” which relies only on timing of a woman’s menstrual cycle.  There are many methods of NFP including the Billings ovulation method, the Creighton Model FertilityCare System, The Symptothermal method (taught by the Couple to Couple League and other organizations), and the Marquette method.

NFP can be challenging during the post-partum period, especially if a mother is breastfeeding.  Breastfeeding causes lactational amenorrhea, a medical term for the absence of a menstrual period while breastfeeding.  During lactational amenorrhea, women experience relative infertility.  Some breastfeeding women will restart their menstrual cycles as early as four months after the birth of their baby, or even sooner if they are supplementing breastfeeding with formula.  Fertility can return before a woman restarts her menstrual cycles, making it difficult for some women to be aware of their fertility status.  But, with just a little bit of knowledge and practice, NFP can be easily practiced during breastfeeding and the post-partum period.

The most common bodily observations used for NFP during the post-partum period are cervical mucus, cervical position, and basal body temperature.  The Marquette method involves the use of an electronic urine ovulation detector.  I strongly recommend the book, http://www.amazon.com/Natural-Family-Planning%C2%AE-Postpartum-Student/dp/0926412329/ref=sr_1_3?ie=UTF8&qid=1309986341&sr=8-3The Art of Natural Family Planning® Postpartum Student Guide, available through The Couple to Couple League.  Also recommended are: Breastfeeding and Natural Child Spacing by Sheila Kippley, and Natural Family Planning: The Complete Approach by John and Sheila Kippley.

So, what is the best method of birth control while breastfeeding and during the first few months after childbirth?  Natural Family Planning!  It is hormone-free and safe for mother and baby.  There are no inconvenient barriers, gels, creams or foams.  It is very low cost.  It is reliable and effective with just a small amount of education.