At my Can We Cana? blog, I have a monthly interview series of Natural Family Planning users, who explain the dramatic impact that NFP has had on their life.  Last month's featured couple, Liz and Kent Gilges, experienced great joy and great suffering through their six children. Their eldest child, Elie, died at age 10 of an incurable brain tumor, which Kent chronicled in a heartwrenchingly beautiful memoir called A Grace Given.  In this interview, Liz and Kent explained how infertility -- which they detected by using NFP  -- can sometimes feel like a great blessing. 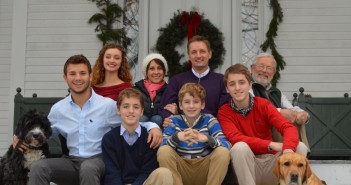 We had many reasons to use NFP, and they changed along the way. Although I believe it's what God wants, Kent wasn't Catholic when we got married and he wasn't fond of Natural Family Planning. He called it Natural Family Having.

I always wanted to get married and be a mom. When we got engaged, I started using NFP to track my cycles just as a matter of course, not to avoid or achieve pregnancy. I wanted a big family. But then we reached the point where we had four children under the age of 5 (including a set of twins), and our oldest child Elie was severely mentally and physically handicapped because of her brain tumor. It was a big strain on our marriage. Still, I wanted to have more children.

A priest told me to be grateful for what we had instead of wanting more. So we used NFP to avoid another pregnancy. That worked on my husband's heart to appreciate the kids that we had, and then he wanted more kids. It was a role reversal. We had two more children, and when our littlest was 11 months old, Elie died.

For years after that, we badly wanted another child, because we felt that our family was empty. We were actively trying, but the babies just weren't coming. Seven years after Elie died, I was diagnosed with breast cancer. I went through a mastectomy, chemo, medication. I absolutely was not supposed to get pregnant while on the medication. At that point, I figured that God knew we were open to life, so we were definitely the exception to the rule against artificial contraception.

When I asked a priest what we should do, he didn't suggest artificial contraception, which was kind of shocking to me under the circumstances. Instead, he said to learn a new kind of NFP since the old way wasn't working due to how the medication affected my body. The new way of NFP showed that I wasn't having any cycles at all; the hormone levels just weren't rising or falling. I told my doctor, and even though he resisted the idea since I was only 44, he finally ran a blood test on my hormone levels. The levels were consistent with someone who had been in menopause for 5 years already.

I felt God had answered my prayers by giving me the gift of being infertile so I didn't have to worry about my health, the intimate part of our marriage, or about following God's will by remaining open to life. It was a win-win-win situation.

2. Which method of NFP works best for you?

In the beginning of our marriage, we used the symptothermal method because I was very regular. It really fit my lifestyle -- take my basal body temperature once in the morning, and done. But after the cancer, I wasn't cycling at all. My temperature was always low because of the drug, and in the symptothermal method that's an indication that you're fertile, so we couldn't have relations.

So we switched to the Creighton method, which tracks mainly cervical mucus, and the method itself was nearly unbearable for me. It required constant checking, always paying attention, and we had to pay for lessons with a Nurse Practitioner. Not everyone can do that. I thought God was asking too much. But it was the Creighton indicators that revealed my infertility and convinced my doctor to confirm it with a blood test.

3. What are the biggest pros and cons of using NFP, in your experience?

Pros: The biggest pro is that God really knows better. He's the best planner. I had two miscarriages after our eldest daughter Elie was born, but she got so sick so young. She needed me. We also wanted another child very much after Elie died, but we actually needed time to grieve and the cancer was coming.

Using NFP to avoid pregnancy after the twins were born helped Kent to appreciate the good in our kids and to want more. The first babies were my choice but then later he really had a desire for us to have more children.

Cons: The culture tells us we can do whatever, whenever, and it's very countercultural to act with self-control and self-discipline. We're not one of those couples who say NFP's been great for our marriage and we love it! It's been challenging. It takes sacrifices, especially for the man.

But when you're sick with breast cancer and lying in bed for 6 months, you also abstain. At that point in our lives, abstaining wasn't something completely foreign to us. So NFP taught us how to sacrifice early on.

4. What NFP resources does your diocese have?

We live in the Diocese of Rochester, and there's two teachers for the Creighton method and two teaching couples from the Couple-to-Couple League. The new bishop is wonderful, and we hope he will put even more NFP resources in place. [Editor's Note: The diocesan web site also provides links to two short YouTube video testimonials on NFP, as well as downloadable brochures and bulletin inserts.]

5. What NFP resources have been most useful to you?

We love the newsletter from the Couple-to-Couple League. Also, we used a very old book called The Joy in Sexuality and Fertility Control. We used it for more than 20 years.

6. How do you think your marriage would be different if you used artificial contraception instead of NFP?

I can't imagine it would have been better. I don't know if my husband would have been as wonderful as he was accepting all the changes in my body and sacrifices in our intimate life that came with the cancer.  I think it would have made it much more difficult.

Do you have an NFP story to tell? Have you ever struggled with your fertility? Comment below or email me at santoskaree@gmail.com and we might feature you in a future interview.