What Is The Difference Between a Vacation and a Pilgrimage? 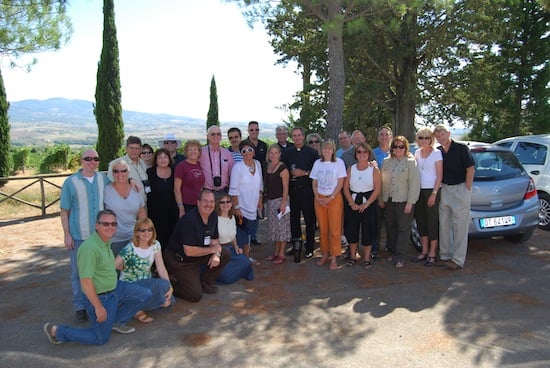 The reality is that we definitely could not afford to go to Italy.

Oddly, the other reality was that we definitely could not afford NOT to go to Italy.

Of course we could only see the first reality; the second, the truer “truth,” loomed in the background tugging at our heart and soul, but we continued to push it aside.

Our 25th wedding anniversary, a year or so away, forced our hand. We needed to decide if we were really going to do something to mark the occasion or simply let it slip by. Italy had been a dream of ours for many years but had never materialized. Indeed, “Plan A” of going to Italy with the family when our oldest graduated didn’t pan out—as most Plan A’s don’t.

As the years progressed, “Plan B” began to form: we would go to Italy with the family when the youngest graduated. Again, not so much panning out was happening for “Plan B.”

Having lost track of what plan we were on, and with our 25th anniversary drawing close, we began seriously toying with the idea of being terrible parents and simply going to Italy ourselves to celebrate our silver wedding anniversary. After coming to grips with the realization that our children would not be scarred for life if we didn’t provide them with some overseas travel while they were under our roof, we started to selfishly look at the option for ourselves.

For a few months, we did the whole sit-in-front-of-the-computer-with-a-cup-of-coffee thing where we perused the different excursions we could take in Italy. “Plan D”—or was it E?—being that we would enjoy the planning as much as the ultimate trip. However, before long, both my husband and I began imagining the worst: that we would spend all our money and be standing in the middle of Rome wondering “now what?”

In the middle of this Italy-planning panic attack, we discovered that our good friends, Dom Pastore and Teresa Tomeo Pastore, were heading a pilgrimage to Italy in September of the year that we were to celebrate our 25th wedding anniversary (May 18, 2011). That, we realized, might really be the way to go! And quickly our plans for an Italy vacation evolved, by the grace of God, into an Italy pilgrimage.

That was easy to explain. When my husband and I feebly attempted to piece together a trip to Italy, I can honestly say we considered it a “vacation.” Vacations follow a particular thread: see some sites, relax a bit, and unwind. Vacations, while providing a reprieve from the everyday life of the vacationer, still require some “work.” The agenda of a vacation is different from a pilgrimage. While each may have sites to see and involve obligations throughout the day, at the very core of a pilgrimage is the desire to be with God—to know Him more intimately, to grow in your relationship to Him. At the heart of a vacation is something like “to unwind” or “to relax and catch up on sleep” or an number of other, even noble and often necessary remedies for the busy lives we lead; but still all very different from what is at the heart of a pilgrimage where we are seeking God in a whole new way. Literally, even in our animation that stems from our excitement and experiences, we become more introverted instead of extroverted—we aren’t blogging or tweeting or catching up on the news.

One of my favorite books is Matt Swaim’s Prayer in the Digital Age where Matt begins his book by telling of a silent retreat he was taking and being dismayed to discover that his iphone was not working. He shares, with great humility and hilarity, how the irony of wanting his iphone on a silent retreat really gave him an insight into where he was at—and where he needed to be—in terms of his upcoming retreat. Was Matt going to call God with his iphone during his retreat? Probably not! What Matt poignantly admits is something we all need to admit: that we need to disconnect from our everyday lives in order to connect with God.

That is what a true pilgrimage is all about.

Dom and Teresa were heading a pilgrimage to Italy. It was intended for couples and would incorporate all the sites that we would have hoped to see in Italy; but it was very different from a vacation. There would be daily Mass and daily Scripture verses with accompanying meditations for each couple. We visited vineyards and saw them as the beauty of God’s green earth; we tasted wine and recognized it as given by God.

This was about placing ourselves in God’s hands and allowing the Holy Spirit to work in our hearts and in our marriages and through our experiences.

I have never, ever felt the sense of freedom from my everyday life as I did on this trip; and my husband will attest to the same feeling. The pilgrimage fed our souls in ways we never would have imagined.

And it was fun!

The main guide for the trip was carefully selected. He was a delightfully funny, faith-filled Catholic man who, at one point, shared his reversion story with us, the pilgrims. And he kept us laughing. This pilgrimage wasn’t about sour faces and forlorn souls—it was about the joy and pleasure of our faith.

Together, there were just over a dozen couples—the pilgrims. The personality mix was perfect. Clearly God’s hand was upon us as we began to form friendships that I am convinced were gifts from God. Two pilgrims were cantors and our Masses were blessed by their singing. Coincidence? I think not.

Some of our pilgrims were quiet while others were more outgoing; but not one pilgrim was outside of our group. I couldn’t help but think about 1 Corinthians 12:12.

Our pilgrimage had two components: Tuscany and Rome. In each, we had a spiritual director: Father Thomas in Tuscany and Father Mark in Rome. These remarkable priests freely gave of their time to minister to us, collectively and individually—if we so requested.

Did I mention that we all renewed our vows during a Mass said by Father Mark? With marriages ranging from two years to over 40, we all had a deeper appreciation of the Sacrament and there wasn’t a dry eye in the building.

In Rome, while on a tour of the different sites, our guide for the day—Elaina—said that a “good pilgrim” sees the 4 basilicas while in Rome. I thought of God’s command in the Torah: that the Jewish people are required to pilgrimage to Jerusalem three times a year. It wasn’t easy for them. In fact I’m sure a case could be made that it was difficult or even a downright hardship.

What a thing for God to command! However, like so many of God’s instructions, the dictate to pilgrimage wasn’t for God’s sake, but was for man’s sake. A pilgrimage is a time where we truly put ourselves at the mercy of God. We hand to Him our body, our mind, our soul and our spirit. We seek Him in ways never imagined. We are so separated from our secular reality that is seems to stop existing. At the very least, it [our secular reality] is put in such a perspective that what mattered just days before no longer does.

We live, in the days of our pilgrimage, completely for God: to know Him, to Love Him, to serve Him. We can’t get close enough to Him!

Here’s where I lose my ability to explain—where I become uncharacteristically speechless…a pilgrimage completely transforms the pilgrim. It is such an interior experience that no words can describe it. It must be experienced.

And that is why God called His people to pilgrimage. It wasn’t that He was being demanding or difficult or even unreasonable. He wanted His people to be transformed. He wanted to be able to reach deep within the heart and soul of the pilgrim and take hold. These are the reasons that God required what appeared to be a hardship of his people—to pilgrimage to Jerusalem.

So this takes me back to where I started and I have to ask you: Can you really afford NOT to take a pilgrimage?