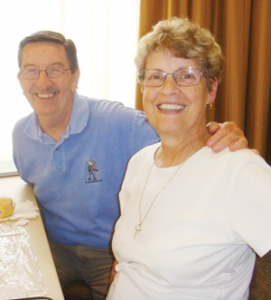 Two of my wonderful friends, our very own Deacon Tom Fox and his lovely wife Dee, were recently featured in The New Vision, the official newspaper for the Roman Catholic Diocese of Tucson.

In the article, which features the good news about Deacon Tom and Dee's amazing podcast Catholic Vitamins, we learn the behind the scenes story of how the couple began podcasting:

Two years ago, my wife Dee and I attended a Catholic New Media Conference in San Antonio. We left convinced we could do a show, but what to call it? What to do with a show? Who would listen? After taking these questions to prayer, we came up with a program idea called “Catholic Vitamins.” Catholic Vitamins? What in the world is that about? Each show would be oriented to a faith “vitamin.” As we began to plan shows, Catholic Vitamin A was for ADORATION. I interviewed a vibrant young priest who had been ordained only some 60 hours. Father Mark had had a powerful experience at a Franciscan University youth retreat as a teenager attending Adoration of the Blessed Sacrament. That was the first Catholic Vitamins show and comments came in from California, Georgia, Colorado and Canada. How were people finding us so quickly?

To learn the answer to that question read the rest of the article here and be sure to head over to Catholic Vitamins today to subscribe.