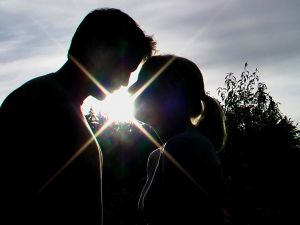 For almost five years now I have been sharing the message of the Theology of the Body (TOB) with engaged couples in the Diocese of Scranton, PA.  The program entitled God's Plan for a Joy-Filled Marriage by Christopher West consists of six separate talks which "engage" couples in the beauty of God's plan for marriage as a sacrament in the Catholic Church.  Moving through the concepts of how we were created in the image and likeness of God, our call to communion, and how sexual union images the Trinity, the first talk reminds men and women of the dignity they have as human persons.  Recognition of our fallen state does not lead us to despair, as the second talk reveals, because the Father always had a plan in mind to restore us in Christ.  The covenantal graces flow right from His wounded side as we learn the meaning of sacrifice for the other.

At this point in the marriage preparation day, I share with couples some of my own witness to sacrificial love.  Tom and I have been married for twenty six years and I still consider our first year to be one of the hardest.  For several years I chose not to share our wedding day story with couples to spare them the fear that something similar might happen to them.  But a friend encouraged me to think past that, and to consider that many couples might benefit from the witness.  Truly, God did give us the gift of suffering in the first hour of our married life, and perhaps that insight could be a source of future strength for someone.

My husband's uncle was a very devout Catholic who had wanted to enter the priesthood.  Years ago, because he had a bad heart, he was denied entrance.  He chose to remain single and to care for his aging parents.  His career was as librarian for a local seminary.  We asked Uncle Don to do the first reading at our wedding from Genesis, about how God created male and female in the beginning.  He gloriously proclaimed the Word.  The mass continued with the other readings, homily, and our vows.  We were married.  I have some memory loss of the sequence of some of what followed, but shortly after our exchange of vows there was noise and confusion behind us.  Our beautiful and faithful Uncle Don had collapsed.  He had a massive heart attack and died.

How does one go on?  How do you continue to rejoice when the shadow of death has been cast across a celebration?  It was difficult to say the least, and we spent months afterward trying to understand.  Ultimately, I recall praying my way to the conclusion that if Uncle Don needed our wedding mass as his place for a holy death, then I was willing to share the day with him.  As Tom's brother now jokes, "It was the only time Uncle Don was dying to get out of church!"  We feel that he may have been received right into the beatific vision, and been assigned intercession for our marriage.  Who can know the mind of God?

Real love is sacrifice.  Our first year of marriage also included a baby nine months later, who almost died due to spinal meningitis, and who also needed two kidney surgeries.  Certainly, there have been a great many joys involved too, many of which were the reward for spending oneself for the other.  It is a journey to which I know I have been called, and as I tell the couples about to enter into the sacrament, "With the call, comes the grace."

This beautiful marriage preparation program explains the meaning of the marriage vows, how God calls us to speak the truth with the language of our bodies before marriage and after and especially in sexual union, and how Natural Family Planning is the Church's gift to married couples in discerning how God is part of our union and the fruit of that union, our children.  All throughout the life of a marriage, the thread of love and sacrifice is woven.  May we recognize how it holds the two together as one.

Cindy Costello is a praying wife and mom who is settling into her empty nest. More than fall trees and caramel lattes, she loves a pen hitting paper to create something unique and beautiful for God. Cindy is challenging herself intellectually and getting ready for Career #2 by pursuing a MA in Theology. And on the side she gives parish talks and retreats , specializing in Theology of the Body and all things Catholic! Visit her website at CindyACostello.com.