Take Back the Holidays for God 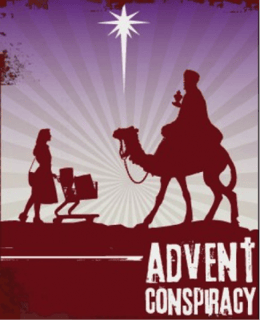 On Halloween night, I, Princess Leia, enjoyed watching my seven-year-old Obi-Wan Kenobi run from house to house, with my two-year-old Yoda trailing one house behind. "Tri-o-tree," he said, extending forward his plastic pumpkin into doorway after doorway.

It was all soooo cute, until we came to one house, with bloody torsos, far flung limbs, ghastly masks of protruding eyes with pins stuck in them, and ghoulish sounds, which filled the air. When the live human zombies handed my Yoda the candy, my normally fearless little Yoda began to cry hard sobs, and from that moment on Halloween night was different. In every doorway that followed, he extended his plastic pumpkin forward and said, I'm scared, I'm scared," "I'm scared.

There is something wrong with this holiday.

Princess Leia now found herself never wanting to Trick-or-Treat again, angry with a society that thinks it's somehow okay to celebrate spilling the insides of horror films onto their lawns and doorsteps, and for what purpose? To welcome children?

When we arrived home Halloween night festivites, my Obi-Wan Kenobi plopped on the couch and said, "I don't want to do Halloween anymore."

'No problem," said a relieved Princess Leia, and the next day I had us make our own makeshift saint lanterns with holy cards.

This whole experience made me ponder, "What is this holiday all about?" Halloween came from Hallowe'en, or All Hallow's Eve. This means the evening before All Saint's Day, the day of the holy ones, lifting our minds heavenward to the saints, a feast of rapturous beauty, honoring all those who have risen to paradise, who love us, pray for our needs, and behold the beatific vision for eternity.

As I reflected further upon All Hallow's Eve's transformation into a scene from the movie, "Friday the 13th," I asked myself, "How do the holidays influence our path to God?"

I remembered how St. Ignatius of Loyola, the preeminent Catholic authority on spiritual discernment, experienced a dramatic conversion to God, while convalescing from a serious battle injury. A self-admitted womanizer, gambler, and schemer, who aspired to fame and loved war-like sports, he lay confined to his bed, reading one chivalrous tale after another, imagining doing chivalrous exploits himself, and winning the favor of a certain damsel of nobility, until he exhausted his available supply of novels. The only books left for him told of the saints and the life of Jesus. This reading changed his life completely. The words in the physical books he held in his hands captured his imagination and his soul.

Catholicism understands this. The human spirit is often lifted up or cast down through the impact of our physical environment--what we look at, what we read, what we ponder, how we decorate our home. The religious icon, the candle, the incense, the crucifix, the statues, the missal, are an entryway for God to impress Himself upon the human imagination and call us to higher things.

Then I distinctly recalled a beautiful Advent night, when God touched me through the physical world. I wrote it down as part of my conversion story in the book, Full of Grace: Miraculous Stories of Healing and Conversion through Mary's Intercession:

"One Christmas when my parents took me to see a manger scene in the spacious backyard of a home near ours in Berkeley, California. Covering the side of a hill were electrically lit Wise Men and camels and cows and angels and sheep and shepherds and a mom and a dad and a baby. When I looked at the display, I thought it was the most beautiful sight possible. My five-year-old heart felt like it had been transported to heaven, and I thought, 'How wonderful it is that my parents have taken me here!' Normally bothered by the cold, my body felt light and expansive inside my winter jacket, and the crisp winter air around me twinkled with joy. I could not take my eyes off the manger scene, and I didn't want to leave. When my parents said it was time to go, I asked if I could stay longer. I gazed at the lit figures on the hill and they seemed to wink back at me."

One man, St. Francis of Assisi, popularized the Nativity or Creche scene. This cozy manger in his mind became the North Star for the Christmas imagination and artwork of the world to follow.

Our own physical living space and how we choose to celebrate feast days and holidays, has a spiritual impact on our lives, and truly, on the world around us.

As we travel forward together in time, let us peer into the past, then collectively and creatively ponder the future of this coming holiday season.

Thanksgiving began as a day wholly oriented to God and for God. The pilgrims at Plymouth, Massachusetts, wanted to thank the Lord for their safe arrival in the New World and for a bountiful harvest. Then during the Civil War, in 1863, President Abraham Lincoln proclaimed a national day of thanksgiving to be celebrated on the fourth Thursday of November.

Most Americans don't know that he called upon the nation to honor this day as one of thanksgiving to God and repentance over war, which he believed was a punishment for sin. And indeed this is true. Our Lady of Fatima said those same exact words, "War is a punishment for sin." Our President asked us to give thanks to God for his providence and to repent for the ways we cause war. His words were powerful, poetic, and timeless. We haven't observed them. We don't know them. They reside on a couple internet sites, but not in the hearts and minds of our nation.

Click here to read his national address as to why he formalized Thanksgiving Day. How might you and I invite God, through our home decorations and rituals, to be present with us that day? How might we celebrate the holiday with its original intent and give thanks to God for His awesome providential care of us, and repent from sin?

Then comes Advent and Christmas. I'm afraid that honoring "the most beautiful time of the year," for many, is a period of swimming upstream against a rush of materialism and secularism which sweeps over, under, and around us in the opposing direction, and sometimes carries us with it, unless we struggle not to end up downstream. Sweet baby Jesus has been washed away, over time, by a powerful current of shopping and Santa and snowmen. The mighty mountain of God's birth into our world has wasted and worn down to a small mound. Lately, I've been walking into stores and asking for baby Jesus, and the response I get is, "We don't have Him here." I've thought, "You're right."

We can take back the meaning of Christmas. Click here to learn of and share the history behind the symbols of Christmas, from the candy cane to the holly tree. Click here for a website called "Advent Conspiracy," to watch a fantastic video called "Enter the Story," which is better than any words I could offer to inspire you to make this Advent your most meaningful yet.

WHAT WOULD JESUS BUY? (WWJB?)

I have an idea. Howabout we Catholics reclaim the religious heritage of our nation's sacred days for ourselves and boycott what encroaches upon them? Why not, for example, make All Saints Day bigger and more noticeable than it is now? Howabout placing saint lanterns on our doorsteps on All Hallow's Eve, while boycotting the particularly gruesome Spirit Halloween stores, which litter the landscape every October? (I'm recalling standing in line with my seven-year-old, trying to distract him from the life-size phantom next to us, holding a bloody axe and chanting with a sinister voice, "I'm going to cut your neck to the bone!") Howabout making or buying products that tell the real story of Easter, as we share the true tale at home through our prayer, words, and home decorations? Easter in America has been subsumed under a big bunny and hard boiled eggs. I didn't even know, until I was sixteen years old, that Easter Sunday had any relation with religion, much less Jesus.

Our purchasing power can help evangelize the culture. The only thing that will sway corporations is money, not morals, so why not speak to them in the only way they know how to listen? If we don't buy it. They won't make it. If we buy it, they will make more of it. This Christmas you can boycott Santa and his elves, and anything else you wish. Instead, you can support Christ's work on earth by purchasing religious items, which celebrate the Real Christmas Story, and by giving Fair Trade gifts.

Fair trade helps the poor help themselves. Small-scale artisans and farmers receive all the benefits of eco-friendly fair trade items--a fair price, long-term trading relationships, safe and healthy work places, and a social premium to be invested in their community project. Through Catholic Relief Services, in particular, Fair Trade funds are also recycled into grants to assist more small-scale producers overseas and grow the marketplace in the United States. Click here for an online catalogue of products, and click on chocolate or coffee to purchase them through CRS Fair Trade.

You may also wish to join a national boycott of companies that donate to Planned Parenthood, the leading abortion provider in the United States. I was shocked to find out that my bank, my credit card, my favorite airline, even my jeans were implicated in this. Click on these sites to read past lists of donors, and boycott away! (Newsinfaith.com, Lifenews.com and an older and informative list from an opposing viewpoint.) It curls the stomach to think that companies such as Johnson & Johnson made the list. Everything from Wheaties to Windex seems to be there. Do you like Coca Cola, but are willing to switch to Pepsi? Nice try! Both were on the list.

An official current list of Planned Parenthood donors, which changes each year, can be purchased through Life Decisions International. (Click here to order, and click here to read about LDI.) By ordering this list, you support their ongoing research and efforts of exposing which companies support the abortion industry. LDI estimates that the boycott has cost Planned Parenthood more than $40 million since the Corporate Funding Project began nearly 18 years ago. Since then over 256 corporations have stopped funding Planned parenthood. Boycotting can make a difference for God!

WHAT WOULD JESUS WATCH? (WWJW?)

A Hollywood script may possess word "saint", or "God", or "heaven", or "angel", but not "Jesus". You may have noticed, for instance, that in the popular television show, "Touched by an Angel," "He" was never mentioned. Pay close attention to the movies produced in the last ten years, and you will find this to be true. Writers run into a glass wall in Hollywood, trying to get a script accepted that holds up the name Jesus. Yet--

"God greatly exalted him and bestowed on him the name that is above every name, that at the name of Jesus every knee should bend, of those in heaven and on earth and under the earth, and every tongue confess that Jesus Christ is Lord, to the glory of God the Father. " (Philippians 2:9-11)