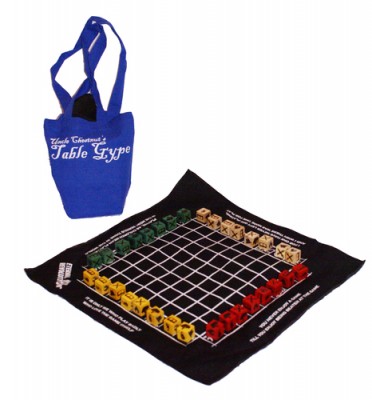 If you're looking for a fun and original gift idea this year for family and friends, be sure to check out Uncle Chestnut's Table Gype. This great game is the brainchild of Paul Nowak, author of The Inconvenient Adventures of Uncle Chestnut. Here's the blueprint of the game:

In his Autobiography, G.K. Chesterton mentions "the well-known and widespread national game of Gype" which he and H.G. Wells invented. Specifically, Chesterton mentions "I myself cut out and coloured pieces of cardboard of mysterious and significant shapes, the instruments of Table Gype; a game for the little ones." Almost 100 years later, Eternal Revolution has published Table Gype as an abstract strategy game with a random element.

Players try to move their pieces from their home row to the row directly opposite. They may jump their own pieces or those of their opponents, but every jump randomizes the playing pieces that were jumped over. Uncle Chestnut's Table Gype is played with a cloth gameboard and 32 playing pieces in 4 colors. Each piece, a six-sided die, can represent any of 6 "mysterious and significant shapes" that move differently.

In an age where too many families are passing endless hours in front of screens, Uncle Chestnut's Table Gype is a gift that will be both fun and interactive.

Order Uncle Chestnut's Table Gype at Amazon and support CatholicMom.com with your purchase