Winnie the Pooh and Lent Too 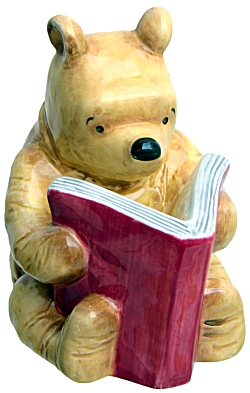 What in the world does Winnie the Pooh have in common with Lent? Does anyone know if there’s a Catholic parish in the Hundred Acre Wood? The little bear isn’t mentioned anywhere in the writings of Ignatius, Aquinas or Avila. Stravinskas knows everyone and everything in and about the Universal Church but I didn’t find Pooh’s photo and personal profile anywhere in the Catholic Encyclopedia. He’s nowhere to be found in any one of the 2,865 paragraphs of the Catechism, the forty-six books of the Old Testament or the twenty-seven books of the New Testament. And wouldn’t you know it; Tigger was unavailable for comment and Piglet wouldn’t even speak to me without legal representation, on the advice of Owl… of course.

Pooh’s normal place is somewhere in our child’s bedroom, I think. But the golden bear with the rumbly tumbly has been sitting on the edge of our entrance hall table since the beginning of Lent. He doesn’t make a sound. He appears to be engaged in a large red book titled All About Honey that he’s holding firmly between his feet. If he had a sleeve, you couldn’t say that he was wearing his emotions on it. His snout is virtually expressionless, yet he pulls at the heart strings of everyone whose attention he merits by his little presence.

Before now, I wouldn’t have thought that an animated cartoon character could teach us anything about works of mercy. But that was before Pooh.

Of all the spiritual exercises and assorted austerities practiced during Lent, I believe our eight-year-old daughter is nose-to-nose with the best of us. She has a profound understanding of the simple meaning of alms giving and it’s not costing her a single penny! It’s all summed up in the out-of-place little ceramic bear with a slot in his back and a rubber cap on his bottom. The handwritten sign with the four big hearts that’s scotch taped to the table beneath Pooh’s feet reads “Put extra change for the poor. Thank you.”

Kid’s do the greatest things! They really can teach us how to be better grown-ups.

As for Pooh, well, he’s getting heavier every day.