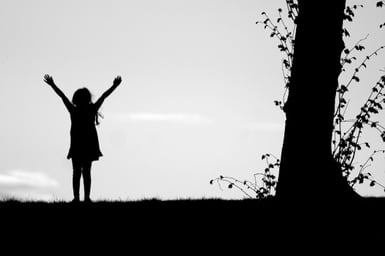 Deciding that the most efficient way for me to grow in holiness this Lent was to become more obedient to the sparse rule that I’ve been trying to flesh out over the past few months, I decided to completely devote myself to it.  What could be harder or better, I thought, than sticking to my daily routine no matter how hard it seemed at the moment?  I made up my mind on Fat Tuesday, and on Ash Wednesday made the impassioned prayer that I always do, “Take me out into the desert, Jesus!”

I winced as the first two weeks of Lent came, waiting for the wilderness to come.  I assumed He would show me how terribly selfish and lazy I am when it comes to how I spend my time.  I thought I would struggle through the middle weeks of Lent, imagining myself fiercely battling temptation after temptation to stop my work and do foolish things and emerge this Easter as a true homemaker, wife and mother extraordinaire.  I’d have a rule the Carmelites in Wyoming would be proud of, and maybe I’d have one for the children, too.  Perhaps we would work together in our own community, laboring and praying together.

And then the wilderness came.  Did the Good Lord show me the very worst part of me—the part that prefers to sit instead of scrub the bathtub?  Well, we went there but we kept going, and it got so much worse than I ever could have expected.  He took me to the place in my heart where love simply cannot dwell.  He showed me how I hate having to stop what I’m doing to help my little children, the rudeness with which I speak to them sometimes, the rigid insistence I have on them showing me respect when I sometimes show them little, how seldom I look on them with love during the day, how seldom they see me delight in them.   And this was no quick detour.  We stayed here together for a full two weeks, as each day crawled by, and my mood soured further until my good days were ones that I endured with a sad, pained expression belying my constant annoyance at the souls God had placed in my care and the worst were, well, just plain awful.

Jesus gently told me through a few different voices, most especially my husband, that it was time for a Lenten redo.  Instead of trying to be obedient to all the tasks I had to accomplish for the day, I was now to forget all that and instead focus on being joyful.  That’s it.  No giving up anything.  No restrictions.  Just  joy.  I had to get the basics down.  I was excited to start—after all, I wanted  to be joyful—and I was grateful to have a reason to do my best.

Since I find myself grumpiest when I’ve been crabby with my family, I decided the best way to fulfill my Lenten goal was to treat everyone as gently and sweetly as I could, trying not to get annoyed by the manifold inconveniences of being a mom.  I didn’t know what would happen, but the next morning, I woke everyone up with big smiles.  I hugged them, sat with them, didn’t rush around, tried to think of things to make them smile, and listened carefully to their funny little stories.  I noticed that I often felt happier with how I treated other children rather than my own.  So, in trying to be joyful, I tried to treat them as carefully and gently as I did other kids.  I tried to say yes to them as often as I could, unless their requests were truly unreasonable.  I tried to ignore how my tasks at home took a little longer by not brushing them off continually.

This whole experiment in joy has blown the lid off a lie I’ve been harboring for years: that if I’m hard enough on my kids I can make them into saints;  if I push them hard enough, I can make them perfect.  But I’d been feeling such frustration because they certainly weren’t turning into little saints but definitely were feeling pushed.  God has ever so gently reminded me there’s a lot I as a mom can do to make the soil of their little hearts fertile and ready to listen to Him, but I can’t push down the seeds and yank up the flowers.  Instead of my usual methods, I’ve tried to hold on to the ideals that I have for them—kindness, patience, politeness, a love for God—and direct them gently, with hugs and jokes and by playing their games.  (Quick, Superman, to the crocodiles in the living room!)

I have never been so joyful, which for me is no small miracle.  And just the other day, my three-year-old son said that he wanted to marry me when he gets big.  Everyone is speaking more kindly to each other.  I don’t feel like my forehead is going to cave in from the force of my eyebrows knitting together.  I feel like I have better color in my face.  My features don’t look like they’ve been etched into my face with an Exact-o knife.  I am trying to let go of the harshness, of the insistence of order at the expense of kindness.   And my children?  They’ve been kinder, gentler, more patient, happier, polite, and I think still in love with God.  And I didn’t even have to force them.

There’s still enough time left in Lent for everything to go south again, for me to fall back into my old ways, to slide back into the bad habit of simply demanding that my children be good.  But I don’t think I will.  Jesus showed me the wasteland in my heart, but now He’s staying to sow the seeds of love there.