The Pope in Cuba: Catholic Care for the Elderly 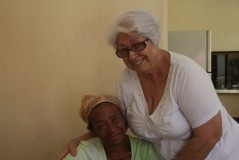 HAVANA, Cuba—With 18 percent of its 11 million people over the age of 60, Cuba is the country in Latin America with the second largest concentration of elderly people.

That is due in part to the country’s health care system and longer life expectancies, low birth rates, and a good amount of emigration without the counterbalancing immigration. In other words, while plenty of people leave Cuba, most of them younger. There isn’t a lot of immigration into the country to take their place. Meanwhile, the population is getting older and living longer.
For more than 20 years, Caritas Cubana has made it a priority to help care for Cuba’s elderly, who tend to be poor and marginalized. Some 7,000 volunteers throughout the country’s 11 dioceses work together to make life a little easier for older people, many of whom live alone and struggle to make ends meet on the small pensions they receive.

Caritas supported groups—there are about 400 around the island—run soup kitchens (sometimes in the homes of volunteers if no church facility exists) and provide laundry services for the elderly. Some have recently even created informal salons where men can get a shave and women can get their hair done. Workshops help senior citizens learn to sew or make crafts, which they in turn sell to raise money to throw a party or take a day trip.

“Meeting their basic needs is one thing but we also try to create spaces where they can share with other people of the same age and similar interests,” said Maritza Sanchez, Caritas Cubana director. “We want them to get involved, that’s what changes their lifestyle and helps them discover their potential.”

Martiza sent me out yesterday to meet with a group of elderly people who eat lunch at her parish church, San Agustin. There, I met Juana Martinez, an 87-year-old woman who has eaten lunch at San Agustin three days a week for the last 12 years. Juana’s daughter immigrated to Spain about two years ago. Juana now lives by herself and rents out her garage as a parking space for a little extra change to supplement her monthly pension.

Juana worked for 15 years washing dishes at a Methodist school. When it closed, she went to work for the state’s sports facility. After nearly 30 years there, she retired with a monthly pension of about $8. It’s hardly enough to cover her basic expenses but Juana sees life as a struggle. “It’s the struggle that makes life beautiful,” she said.

Lunch at San Agustin and the other church activities she attends are what keep her going.

“I love to dance and when I come into the church, I come in dancing,” she said.

The church family is equally important to Mercedes Hernandez Valdez, 68, the Caritas volunteer who runs the soup kitchen.

Mercedes’ daughters also left Cuba more than 25 years ago (she saw them two years ago for the first time in 19 years) and her husband recently died.

These days, Mercedes spends every waking moment at San Agustin. She not only knows every person who eats at San Agustin by name, she knows where they live, how they get there, and what they need. And she takes it upon herself to get them shoes when she can, a little bar of soap (which, as of a year or so ago was dropped from the state rations), or a blanket.

Robyn Fieser is Catholic Relief Services Regional Information Officer for Latin America and the Caribbean. She is in Cuba this week for the papal visit.