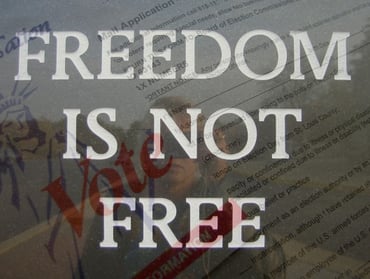 This week, I was introduced, by a mutual online friend, to a woman named "Adrienne", from the sunny state of Florida; whose ministry, "Catholics Called to Witness",  is meant to inspire, encourage, and prompt Catholics to know their Faith, live their Faith, and have the courage to defend their Faith in light of current political and social issues; and especially, in good conscience, when voting in the upcoming presidential election.

The following video was shared with me and I find it worthy of sharing with all of our wonderful readers, here on Catholic Mom.

Let us pray for one another. Times, "they are a' changin'".
Recently, my teenage son remarked that at one time in his early life, he viewed "martyrdom" as something distant and remotely plausible in his own daily life. (Aside, of course, from the tiny instances of martyring and sacrificing that we are each personally called toward in life). Now, however, he feels differently. As he comes to understand and face the pressures, persecutions, and stripping of freedoms that are swarming the nation insofar as Catholics are concerned; he says that he no longer feels that being martyred for his Faith is an unlikely event in his lifetime; but that he can envision it as quite possible.

My son is not yet old enough to vote in a presidential election. In three years' time, he will be though. I am confident that he, my daughter (who is one year his elder) and many other young people I have the honor of knowing, will have no problem in "voting their conscience".

What about you and me?

What about the others of our generations?

What about the unfathomable numbers of Catholics who publicly claim support for the incumbent Democratic Candidate; knowing what his administration has done to rob us of our Constitutional rights as Catholics?